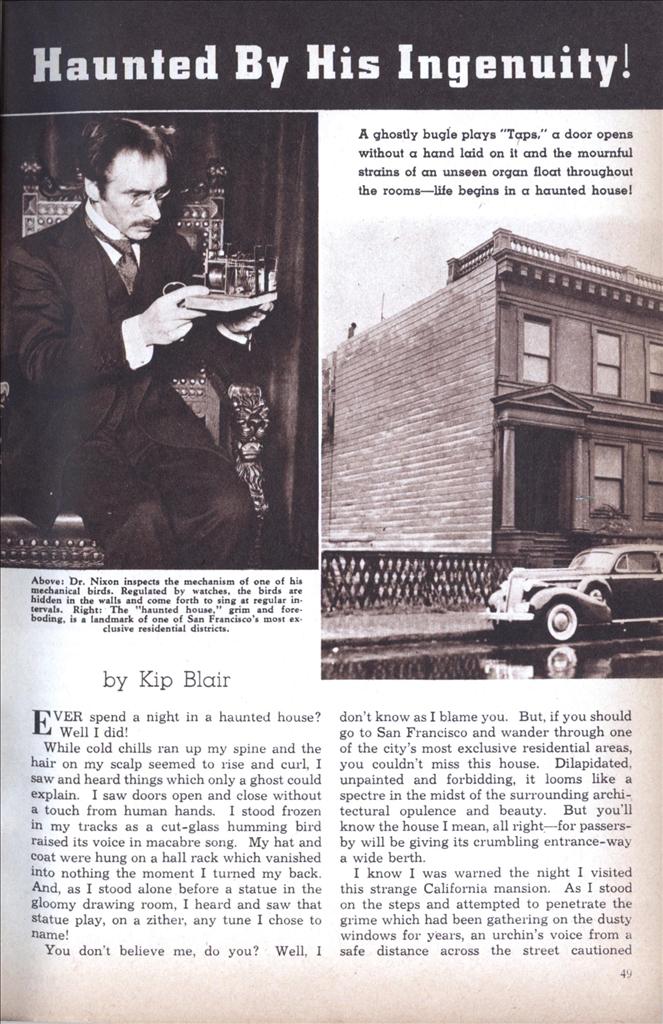 Haunted By His Ingenuity!

EVER spend a night in a haunted house?

While cold chills ran up my spine and the hair on my scalp seemed to rise and curl, I saw and heard things which only a ghost could explain. I saw doors open and close without a touch from human hands. I stood frozen in my tracks as a cut-glass humming bird raised its voice in macabre song. My hat and coat were hung on a hall rack which vanished into nothing the moment I turned my back. And, as I stood alone before a statue in the gloomy drawing room, I heard and saw that statue play, on a zither, any tune I chose to name!

You don’t believe me, do you? Well, I don’t know as I blame you. But, if you should go to San Francisco and wander through one of the city’s most exclusive residential areas, you couldn’t miss this house. Dilapidated, unpainted and forbidding, it looms like a spectre in the midst of the surrounding architectural opulence and beauty. But you’ll know the house I mean, all rights—for passers-by will be giving its crumbling entrance-way a wide berth.

I know I was warned the night I visited this strange California mansion. As I stood on the steps and attempted to penetrate the grime which had been gathering on the dusty windows for years, an urchin’s voice from a safe distance across the street cautioned me against attempting to gain entrance.

“Better not go in, Mister,” he shouted. ‘”That house is haunted. You’ll see—wait’ll you ring the bell!”

I saw all right—worse still, I heard. Hardly had I touched the cobwebbed doorbell, when I was riveted in my tracks in horror. From the eerie recesses of the darkened house came the sound of a bugle softly playing taps!

A moment later the great doors swung open mysteriously and, though not a soul appeared, I somehow could not restrain my desire to enter. And glad I was that I did—for, once inside, I met the master of this mysterious household, Dr. Cecil Nixon, prominent San Francisco dentist.

And, in Dr. Nixon, lies the explanation for the entire mystery. For the doctor — a black-haired, hollow-eyed wizard—is an amateur inventor, and his house, with its windows that have remained unwashed for 22 years, its paint peeled by the ravages of time, and its whole appearance one of grim foreboding, is the monument to his amazing skill.

“Come right in! Don’t be frightened,” Dr. Nixon greeted me. “There aren’t any ghosts here. It’s all done with mirrors—or, at least, mirrors and wheels.”

The outside of the house was left in an uninviting state on purpose, the dentist told me. “After all,” he explained “no self-respecting haunted house has a fresh coat of paint. That’s the reason we leave it weather-beaten and in such contrast to the beauty inside. And, of course, those who visit me can more readily enjoy the interior after viewing the outside A truer word never was spoken! The inside of the house would delight the severest art critic and the most exacting housewife. From the moment the visitor crosses the threshold, and puts behind him the dingy drabness of the house’s exterior, he realizes he is in one of the most beautiful homes in San Francisco.

Rich, deep-toned hangings, exquisitedly-carved and finely-turned furniture, rare objects of art and fine-panelled rosewood, walnut and mahogany trim, convince the astounded guest that he has passed into another world, a paradise of delicate beauty. At the same time, the very elegance of the interior, with its cathedrallike, old world richness, never permits the visitor to forget that he is in a house that would delight a Karloff.

Take the hall hat rack, for example. I put my hat and coat on it and had turned to speak to Dr. Nixon, when a whirring behind me spun me around again. The rack and my coat and hat had disappeared! Where, a moment before, I was certain I had hung them there now was nothing but the beautifully carved and panelled wall.

“I just put them out of the way,” the dentist laughed. “Here”—he showed me two little knobs in the carving—”I turn these and the rack, which is an eyesore, folds neatly into the wall.”

I resolved to be a bit more observant!

We strolled along a corridor, this strange, severely-garbed genius and I, till we came to a highly -carved and polished door. At a command from Dr. Nixon, it opened to permit us to pass through!

Once inside the drawing room, the doctor issued another quiet command. I and from a distant part of ; the house came the quietest, most beautiful, and at the same time most somber, organ music I have ever heard. It was ; as though the Angel of Death were approaching and had provided himself with suitable entrance music.

“Scared?” the dentist I smiled. “All right, we’ll do without the organ music.”

And again, without raising his voice above a murmur, he issued a command and the distant playing stopped. Beautiful as the music was, I found relief at its ceasing, for it gave me a chance to examine the exquisite paintings, sculpture and carving of the room.

In still another chamber, however — a room known as “The Death Valley Room”—I was to get my greatest surprise. For, suddenly, and at no command from the doctor, the soft tones of playing flutes seemed to come from between the walls and once again flood the room with beautiful music. Three ornamental and expensive-looking birds added to the mystery at this point by breaking into high-pitched song.

“What a place!” I shivered, as the doctor laughed at my discomfiture.

“These are but minor attractions,” he smiled. “Come—I’ll introduce you to Isis. She’s my real pet.”

Pet, indeed! Isis was the most amazing exhibit in this most amazing of all households. With the figure of an East Indian princess, she reclined on a couch, and in her lap lay an ancient zither.

“Any particular tune you’d like to hear?” Dr. Nixon asked. “Just request it and Isis will oblige.”

More in amusement than belief, I suggested “Swanee River.” Without a word or a touch from the doctor, the waxen fingers of the image began to move over the zither. The tune definitely was “Swanee River!” I mumbled other tunes, hard ones, easy ones, obscure melodies, symphonies. Isis played them all!

“Stop!” I shouted to the doctor. “I give up! Let me in on this mystery before I lose my reason.”

Dr. Nixon laughed heartily. Then came the explanations. Isis is a veritable heap of intricate mechanism—1,187 wheels (300 in her breast alone), 2,233 miles of fine wire, several hundred electromagnets, 9 watches and many jeweled movements, make up the internal organs of this remarkable creature. There isn’t a single phonograph recording in her makeup, the tunes being selected by a series of spinning discs.

Isis can play any one of 3,000 tunes at a given command. The speaker’s voice is carried through a tube at the base of her couch, and the vibrations do the rest. Isis hasn’t missed yet, and one night, during a reception at the Nixon home, she picked up the notes of a singer’s voice drifting in from the drawing room and began to pick out “Where the River Shannon Flows” on her zither.

It took Dr. Nixon three years just to draw up the blueprints for Isis, and four years for the actual construction work. “There are 150 different scientific principles involved in Isis,” the doctor said. “To explain the mechanics of her operation would require a book. I can guarantee you, though, that there isn’t an automaton like her anywhere else in the world.”

And that isn’t all— Isis even responds to heat and cold! When it gets too hot in the room, she simply lifts her hand and doffs her veil. Dr. Nixon regards that as one of his simpler inventions, however; the trick is accomplished with a thermometer attached to an electrical circuit running through one arm.

But what about the other Nixon inventions?

Well, there’s the matter of that door opening, for example, without anyone appearing to touch it. That involves one of the doctor’s latest inventions—the mechanical ear. He calls it “Sesame,” since it is imbedded in the heavy carving of the door and when you say “Open!” to it, it opens. Aside from inferring that it was another case of vibrations, though, Dr. Dixon wouldn’t explain.

The flute music is done with watches. The dentist took an ordinary pocket watch, removed the hands, and substituted a cam. The latter causes a wire lever to contact a mercury vial, which forms a contact and starts electrical current flowing from batteries concealed near the watch. The current causes a mechanism in the basement—including a bellows and a music roll—. to operate the flutes, which are concealed behind wall paintings.

Taps at a push of the doorbell is accomplished by a music box which is set in motion when the button is touched. In the construction of the box, Dr. Nixon used four small dinner chimes, and the notes are the result of four small hammers hitting the chimes.

The birds chirp because of a watch and cam arrangement similar to that used for the flutes. Actually, there are watches hidden all over the house, their mechanism set to open doors, to start music at stipulated intervals, to move panels, and to turn off the lights.

I accepted Dr. Nixon’s invitation to descend to the basement, although I confidently expected to find it lined with coffins, skeletons, shrouds and other spook paraphernalia. Instead I found a cellar resembling the power plant in a defense-contract machine shop.

The pumps, bellows, music rolls, and other equipment that made up the flutes, covered one wall, the mechanism for the other gadgets took up a second wall. The rest of the area was given over to the organ. The doctor admitted that he attended his first organ concert several years ago and came away with a great longing to own one of the instruments himself.

Not having the do-re-mi to buy one, he went to the library, read every book on organs he could obtain, and came home and built one which present-day experts describe as one of the finest in the country.

“But how was it started and stopped at your command?” I asked him.

“Easy,” the doctor said. “There’s a little pin in the floor of the drawing room upstairs—all I had to do was step on that to start and stop the music. You thought it was something supernatural.”

That’s the way the doc works. He’s been a tinkerer since he was a boy. Although he never studied any subject outside of his dentistry, he has a complete knowledge of architecture, and does all his own remodeling. He’s an artistic wood-carver, and fashioned the work in his own house. He’s a qualified electrician, has mastered medicine (treats himself for all ailments!), knows pharmacy and compounds his own prescriptions, has earned his living in shipbuilding, entertained on the stage as a magician, and can carry on a learned discourse on any form of art. He even did the sculpture which adorns his own drawing room.

“What you need,” I told him, as my coat and hat popped out of the wall and I prepared to leave, “is a hobby.”