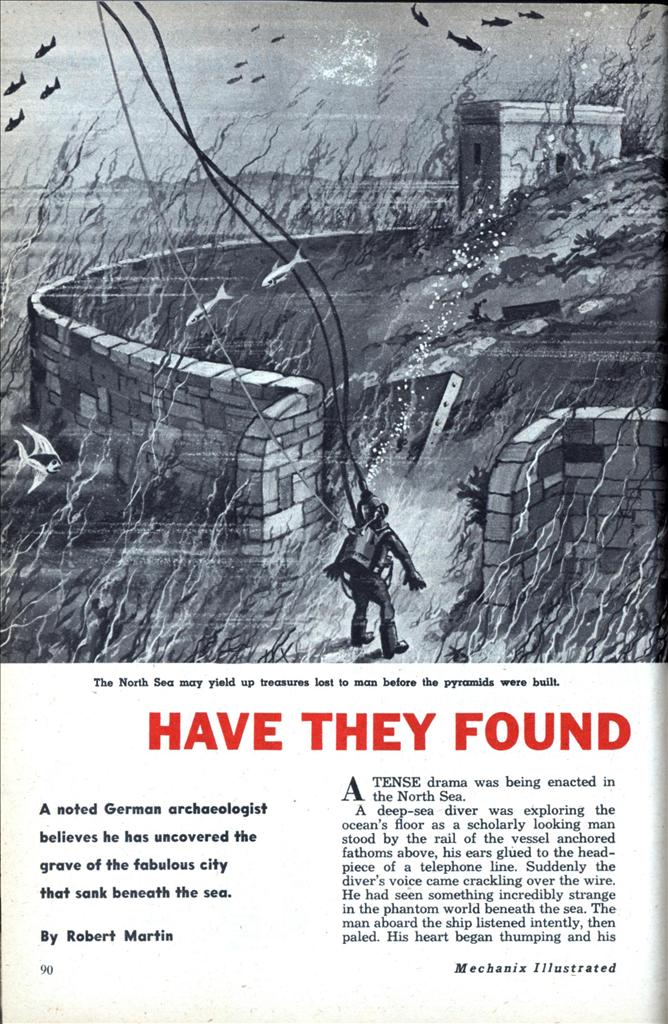 Was this the climax of the oldest, longest and most tantalizing hunt man has ever waged, a hunt that has been going on for the unbelievable span of 11,500 years?

Was this to be the greatest geographical and archaeological find of all time?

Was this, in short, the discovery at long last of the legend-shrouded lost continent of Atlantis?

The man on shipboard, talking with the diver, was Dr. Juergen Spanuth, a 46-year- old German pastor and archaeologist, who was in the midst of his third gruelling expedition to locate the remains of the fabled island.

What, exactly, did his diver find to convince him that he had reached the end of his search?

But first, the story of Atlantis, the weird tale of a vanished land that has intrigued mankind through the ages: The incredible story was first told by the philosopher Plato, who wrote about it in his famous Dialogues in 400 B. C. Atlantis, he said, was an enormous island, larger than North Africa and Asia Minor combined, which was situated squarely in the middle of the Atlantic Ocean. It lay just beyond the “Pillars of Hercules”—now called the Straits of Gibraltar—and included the Azores and Canary Islands. To the west of Atlantis lay North and Central America, to the east were Europe and northwest Africa, to the south was South America.

A great civilization flourished on Atlantis. The people were virtuous and Godfearing, tilled their fertile soil and reaped an abundance of food, aromatic plants and exotic fruits. The government was a federation of ten kingdoms, each ruler an absolute monarch and all pledged not to war on one another. There were fine cities of imposing architecture on the continent, with gold and jewel-encrusted temples and royal palaces bulging with fantastic treasures of every description.

The Atlanteans, however, were power-hungry. Their far-flung empire already stretched from the Straits of Gibraltar to Egypt. They wanted more; they wanted to engulf both Egypt and Greece. And so a war of aggression was launched, a war which never saw an end.

A dreadful night came upon Atlantis, a night which brought horror and destruction on a scale never witnessed before or since by mortal man. A series of massive earthquakes and volcanic explosions rent the entire continent—the earth buckled and heaved. Houses, temples, public buildings, palaces fell like kindling wood. Entire cities were swallowed whole as the earth parted. Mountains crumbled and great plains were overrun by hot, smoking rivers of lava from the belching volcanos. Then giant tidal waves rolled in from the sea and hurled themselves upon the land. Mountainous floods raced inland, covering plains, forests and inhabited areas. And still the earth roared and quivered, ripping, swallowing, destroying.

Finally, came one last devastating upheaval. Down into the sea sank the entire continent of Atlantis with its culture, its treasures and its 50,000,000 souls, destroyed in a single night by the most convulsive cataclysm ever visited upon the world.

It happened, according to Plato, 11,500 years ago. Since then, century after century, men have roamed the seas, seeking clues as arguments raged. The search still goes on. Was Plato writing of a mythical kingdom or was he recording actual history?

One who believes Atlantis actually existed is Dr. Spanuth. Late in the summer of 1952, the minister-archaeologist set out from Husum, a German port, on his renewed search. His entire life’s savings had been poured into the attempt. On board were a geologist, an underwater photo expert, several divers, a stenographer and a shipload of modern scientific equipment.

Dr. Spanuth, who had spent years studying Atlantis lore, was convinced that the continent actually laid buried in the North Sea, not far from the dikes of his own native coastal village of Ost Bordelum. So he steered a course toward the rocky island of Helgoland, circled it and dropped anchor about six miles away. Down went a diver.

What did the diver report that blanched the face of the pastor as he listened over the phone line? This: “I see a wall,” were the diver’s words. It was a wall encircling a large oval area 1,012 yards long and 328 yards wide. And inside the wall? Large, irregular piles of sand—piles that looked like ruins of buildings covered over by the silt of the ocean. These, Dr. Spanuth hopes, hide the wreckage of a mighty palace and temples of an Atlantean king. Inside he believes, is fabulous treasure the like of which man has yet to see.

But this wasn’t all. A diver brought up a cobblestone. “What,” Dr. Spanuth asks the world, “would an ancient cobblestone be doing on the floor of the North Sea?” What—unless it is a stone from a street II,500 years old, where ancient soldiers trod and the carts of tradesmen of a bygone era lumbered, he answers.

Helgoland, the pastor is certain, was at one time the highest mountain on the continent of Atlantis. When the rest of it vanished, the mountain alone remained. As evidence, he goes directly to Plato. After the disaster, the philosopher wrote, only “red rocks of the king’s island remained to mark the spot.” And this is Dr. Spanuth’s clincher: Helgoland is world-famed for its red rocks! In addition, the pastor possesses a map dating back to the ancient Germanic Goths, which refers to Atlantis in the North Sea.

Dr. Spanuth is convinced, too, that Plato erred in spotting the location of Atlantis. Plato, he points out, got his information on this score from Egyptian priests, who could easily have been mistaken because of primitive mapping methods.

But let’s go deeper into the fascinating story of the lost continent and the argument currently raging about whether or not it ever existed.

Many eminent oceanographers and archaeologists are frankly unimpressed. Dr. Maurice Ewing, for instance, a sea-going scientist of Columbia University, has explored the Atlantic Ocean for years and has stated categorically: “There never was such a place.”

But other scientists have drawn up a formidable case for Atlantis and presented it before the court of world opinion. Here is what they offer in evidence: Exhibit A—The face of the world aeons ago looked different than it does today. Geologists have proven that land bridges once linked Alaska with Siberia and Europe with Africa. Ignatius Donnelly, who was probably the world’s foremost Atlantean scholar, pointed out in his famous book, Atlantis, The Antediluvian World, that at one time Britain was actually submerged 1,700 feet, that what is now Sicily once lay under water and that the burning Sahara Desert was a sea. Thus the fact that Atlantis isn’t around now is no proof that it wasn’t around at some time in the past.

Catastrophes like this, on a smaller scale, have actually happened within modern times.

In 1822, an earthquake shattered Java, destroying an entire mountain region and forming an enormous gulf where crags once towered proudly. In 1883, the eruption of Krakatoa destroyed five cubic miles of the Pacific Island. In 1819, a quake submerged a 2,000-square-mile area in the South Pacific.

Concludes Donnelly: “There is nothing improbable or impossible in the statement that Atlantis was destroyed suddenly by an earthquake in one dreadful day and night.”

Exhibit C—Science has found something strange and remarkable under the Atlantic Ocean. The discovery resulted from a dramatic and little-known project conducted jointly by the U. S., Great Britain and Germany toward the close of the last century. Five vessels set out to sound the bottom of the Atlantic, hoping to chart information which might have general scientific and commercial value.

The result was a bombshell.

The soundings revealed the astonishing fact that great ridges of land existed under the ocean exactly where Plato had described the lost Atlantis!

Exhibit D—During the past war, two pilots, each flying separately, came back to their base with eye-bugging stories. Both—one an American, the other a Briton—told of having seen the ruins of a town under the ocean when the sun was at just the proper angle. The sight lasted for only a few seconds, each explained. Where did they spot it? Between Dakar and Natal, squarely in the area of the submerged ridges!

In addition, a remarkable biological fact has been described by the noted Scottish scholar, Lewis Spence, and noted by many acute observers of animal life. It is this: a strange migratory instinct sometimes comes over the Norwegian lemmings, which are small animals of the rodent family. Most of them, Spence points out, annually leave the Norwegian coast and swim far out into the Atlantic. “On reaching the spot to which the migratory instinct has so unerringly called them,” he continues, “they circle round for some considerable time, as if in search of land but, failing in their quest, gradually sink exhausted into the depths.”

It’s also known, Spence goes on, that large flocks of birds annually fly to a part of the Atlantic where no land is now visible and after fluttering about in dismay for a considerable time, fall exhausted into the water.

What’s the reason for this amazing behavior? Could it be that these animals and birds stemmed from species which, long years ago, made annual migrations to an island-continent in the Atlantic Ocean—and could it be that the instinct still survives in them?

The capital of Atlantis, according to Plato, was reached from the ocean by a system of wide and deep canals and was surrounded by three massive, turreted stone walls. The outer wall was brass-coated, the center one tin-coated, while the third, “flashed with the red light of orichalcum.” Within the city were two constantly running springs, one actually flowing day and night with hot water, while the dock areas were jammed with vessels which came and went regularly, trading with all the ports of the world.

“The total impression you get,” writes Edwin Bjorkman in his The Search For Atlantis, “is that of an unbelievably rich commercial center, fond of display and good living and possessing mercantile connections in all known quarters of the globe.”

That’s the story of Atlantis, one of the most intriguing and romantic known to mankind. Did the explorer-pastor, Dr. Spanuth, actually find it? Listen to this remarkable parallel: The world hooted when a man named Heinrich Schliemann, a German archaeologist, began digging for the ancient city of Troy in Asia Minor. Troy never existed, everyone said; it was simply a pretty myth. Then the world gaped—because Schliemann found classical Troy and proved it was real!

Will the world soon learn the same explosive truth about the fabulous lost continent of Atlantis?