Popular Science
Issue: Jul, 1939
Posted in: Crime and Police, Sign of the Times
Tags: psychology
1 Comment on Have You a Wrong Way Brain? (Jul, 1939) 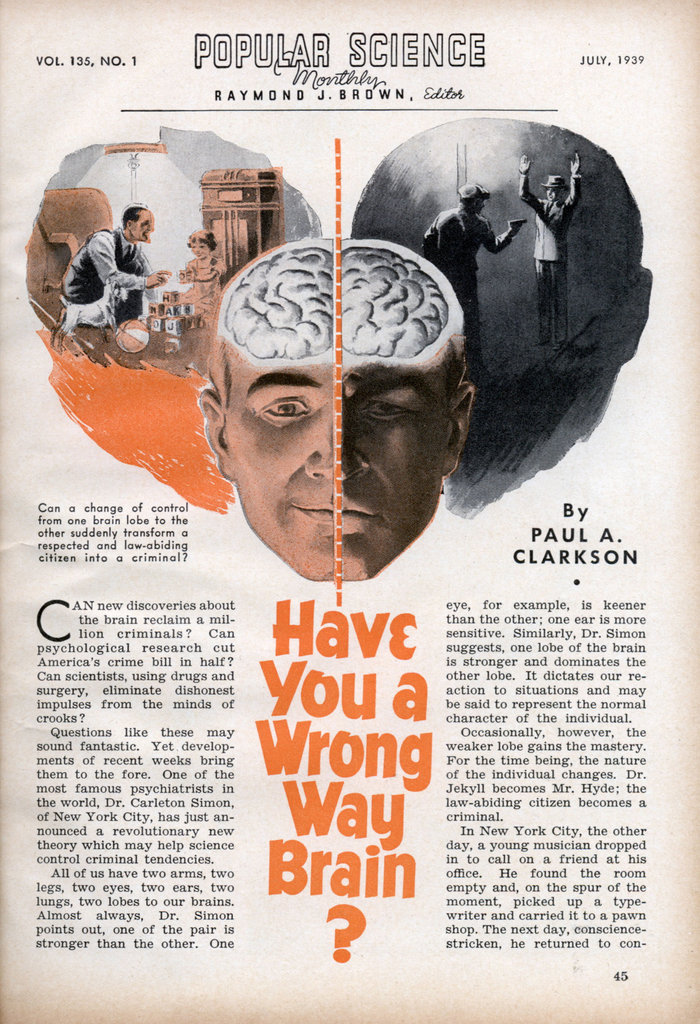 Have You a Wrong Way Brain?

By PAUL A. CLARKSON

CAN new discoveries about the brain reclaim a million criminals? Can psychological research cut America’s crime bill in half? Can scientists, using drugs and surgery, eliminate dishonest impulses from the minds of crooks?

Questions like these may sound fantastic. Yet developments of recent weeks bring them to the fore. One of the most famous psychiatrists in the world, Dr. Carleton Simon, of New York City, has just announced a revolutionary new theory which may help science control criminal tendencies.

All of us have two arms, two legs, two eyes, two ears, two lungs, two lobes to our brains. Almost always, Dr. Simon points out, one of the pair is stronger than the other. One eye, for example, is keener than the other; one ear is more sensitive. Similarly, Dr. Simon suggests, one lobe of the brain is stronger and dominates the other lobe. It dictates our reaction to situations and may be said to represent the normal character of the individual.

Occasionally, however, the weaker lobe gains the mastery. For the time being, the nature of the individual changes. Dr. Jekyll becomes Mr. Hyde; the law-abiding citizen becomes a criminal.

In New York City, the other day, a young musician dropped in to call on a friend at his office. He found the room empty and, on the spur of the moment, picked up a typewriter and carried it to a pawn shop. The next day, conscience-stricken, he returned to confess what he had done. Again he found his friend had stepped out and, “before he knew what he was doing,” he picked up the new typewriter which had been bought to replace the one he had stolen, and pawned it, too. Later, in the police line-up, he declared he couldn’t imagine why he had committed the thefts.

According to Dr. Simon’s theory, the irrational behavior of the musician was the result of a shift of dominance from the stronger lobe of the brain to the “under-dog” lobe. Normally honest, the musician temporarily became a different person with a criminal outlook. Similarly, wealthy women kleptomaniacs steal articles for which they have no real need, and respected citizensâ€”like Richard Whitney, for years head of the New York Stock Exchangeâ€”are convicted of embezzlement.

Such dual personalities form one of the major riddles of criminology. Dr. Simon’s simple explanation of what occurs may go far toward helping understand the bewildering behavior of many lawbreakers. At the same time, studies of the brain itself, and recent advances in surgery and the treatment of mental ills, have given science new hope of reclaiming criminals. At Georgetown University, in Washington, D. C, experts are working in the most elaborate brain laboratory in America. More than 5,000 human and animal brains are available there for study. With amazingly precise mechanisms, the scientists can slice, for examination under the microscope, brain sections less than 1/500 of an inch thick. Out of their researches, they hope to learn more of the physical basis for human conduct.

It has long been known that physical injury to the brain itself frequently alters the character of the victim.

Several years ago, for instance, a young man in New Jersey started out for a rabbit hunt. A few hours later, his companion’s shotgun went off accidentally and one of the lead pellets struck the young hunter just above the right eye. Local doctors decided against removing the shot and the patient apparently recovered. But his character

began to change. He became shiftless, sullen, and evasive. Money began to disappear from the homes of friends he visited. Finally, late one night, he was caught in the act of breaking into a neighbor’s house. When brain experts examined him, they found that the lead had lodged near the brain and was affecting the delicate tissues of one of the lobes. When the pellet was removed, the boy’s character returned to normal. Today, he holds a responsible position in his home town.

What proportion of the hundreds of thousands of criminals now in American prisons are suffering from mental ills, no one knows.

Experts estimate that as many as eighty-five percent of them are so afflicted. Changing their mental condition is one of the great problems of medical science.

A dramatic example of what surgery may have to contribute in this direction is reported from Washington, D. C. Forty-eight times, Dr. Walter Freeman and Dr. James W. Watts, two skilled brain specialists, have aided mental cases through a daring new technique. Like a housewife inserting a corer in an apple, the surgeons push a narrow, chisel-like surgical instrument into the brain at one temple, moving it carefully upward and downward to sever the frontal areas from the rear “emotion centers.” The operation is repeated on the other half of the brain. Results are amazing. Patients who previously were cowering and trembling with insane hallucinations are freed from their fears. The technique is based upon earlier experiments on apes made by the Yale University brain authority, Dr. Carlyle Jacobsen.

Another new treatment for mental ills, of special value in relation to dual personality and crime, is almost as spectacular. It was introduced by a brilliant Viennese physician, Dr. Manfred Sakel. Patients are given “shock doses” of insulin, the gland extract used in treating diabetes. The result is a terrific shock to brain and nerves. Patients often are thrown into convulsions. Yet, in more than 1,000 instances, here and abroad, the violent treatment has justified itself. Men and women suffering from split personalityâ€”even those given up as hopelessly insaneâ€”have been shocked back to normalcy.

Thus, traveling along different roads, scientists recently have advanced toward better understanding and greater control of mental abnormalities. By cutting the roots of crime in the minds of malefactors, they may some day play a major role in reducing our $15,000,000,000-a-year crime bill and in turning outlaws into good citizens.