No, I haven’t. Also, doesn’t this seem like an advertorial? 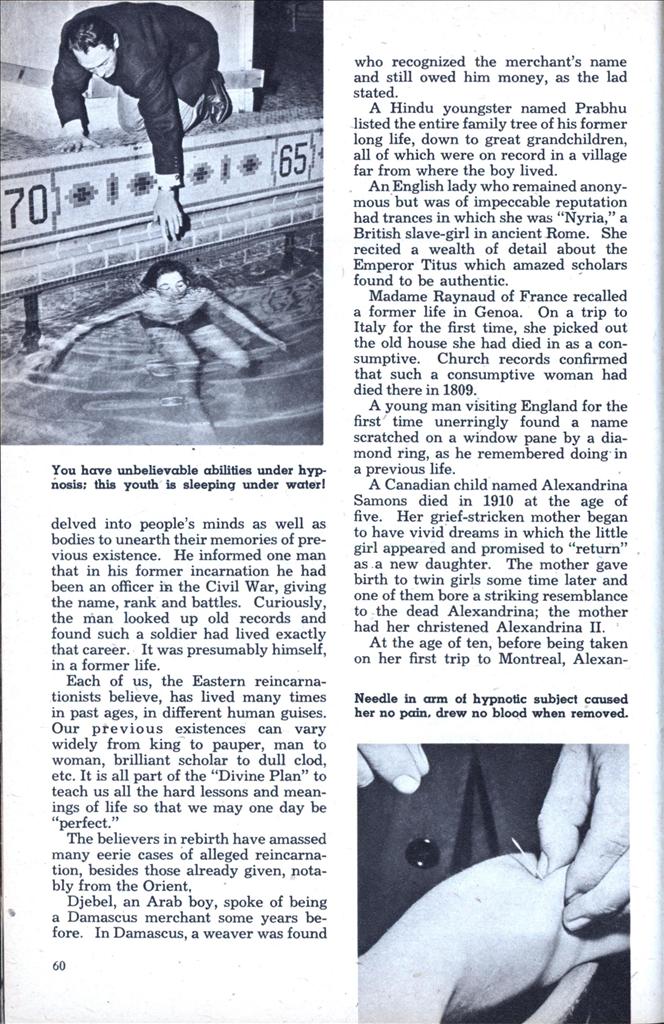 HAVE YOU LIVED BEFORE?

Have we new reason to believe—as men have believed for ages—that we have had other lives and will return again?

YOU are going back, back . . . three years old … two … one year old… now you are a mere infant . . . but you are still going back into time and space … you will find other scenes of faraway lands and distant places in your memory … now you will tell me … what do you see? What do you see?

And what is your name?

Bridey . . . Bridey Murphy. Named me after my grandmother Bridget.

Do you know what year it is?

What town do you live in?

These are selected excerpts of answers that were given by Mrs. Ruth Simmons, in a state of deep hypnosis, on November 29, 1952, as reported by Morey Bernstein in his book The Search For Bridey Murphy (Doubleday & Co., Inc.). Her answers seemed to indicate that this Nebraska-born girl living today was remembering a previous existence in Ireland from 1798 to 1864.

Can this be true? Do we all live previous lives, over and over, as the ancient doctrine of reincarnation holds? Were you perhaps some famous person in history such as Julius Cae- sar, Napoleon, Shakespeare, Newton?

Such is the breathtaking scope of reincarnation—also called transmigration, metempsychosis, rebirth, karma, preexistence and eternalism. By whatever name it has been known in different times or cultures, the idea has existed since the dawn of history.

Buddhism some 5,000 years ago already nourished this many-life concept under the rules of Karma, stating that souls were eternal, inhabiting body after body through the ages until they reached the blessed state of Nirvana. Close to one billion Oriental people today accept reincarnation without question, as part of their religion.

Only the Western nations in general have rejected or ignored reincarnation. Still, an ardent group here believes in multiple lives. They cite certain “proofs”: An 11-year-old East Indian girl, Shanti Devi, remembered many details from her previous life. She described accurately her former husband’s home in far-away Muttra. And she remembered where she had hidden a money-box—and sure enough, it was still there.

Perhaps the most famous was Edgar Cayce, born in Hopkinsville, Ky., in 1877. The story goes that he had remarkable powers to diagnose physical ills, leading to cures in 90 per cent of the 30,000 cases he handled. Later, he who recognized the merchant’s name and still owed him money, as the lad stated.

A Hindu youngster named Prabhu listed the entire family tree of his former long life, down to great grandchildren, all of which were on record in a village far from where the boy lived.

An English lady who remained anonymous but was of impeccable reputation had trances in which she was “Nyria,” a British slave-girl in ancient Rome. She recited a wealth of detail about the Emperor Titus which amazed scholars found to be authentic.

Madame Raynaud of France recalled a former life in Genoa. On a trip to Italy for the first time, she picked out the old house she had died in as a consumptive. Church records confirmed that such a consumptive woman had died there in 1809.

A young man visiting England for the first time unerringly found a name scratched on a window pane by a diamond ring, as he remembered doing in a previous life.

A Canadian child named Alexandrina Samons died in 1910 at the age of five. Her grief-stricken mother began to have vivid dreams in which the little girl appeared and promised to “return” as a new daughter. The mother gave birth to twin girls some time later and one of them bore a striking resemblance to the dead Alexandrina; the mother had her christened Alexandrina II.

At the age of ten, before being taken on her first trip to Montreal, Alexan- delved into people’s minds as well as bodies to unearth their memories of previous existence. He informed one man that in his former incarnation he had been an officer in the Civil War, giving the name, rank and battles. Curiously, the man looked up old records and found such a soldier had lived exactly that career. It was presumably himself, in a former life.

Each of us, the Eastern reincarnationists believe, has lived many times in past ages, in different human guises. Our previous existences can vary widely from king to pauper, man to woman, brilliant scholar to dull clod, etc. It is all part of the “Divine Plan” to teach us all the hard lessons and meanings of life so that we may one day be “perfect.”

The believers in rebirth have amassed many eerie cases of alleged reincarnation, besides those already given, notably from the Orient, Djebel, an Arab boy, spoke of being a Damascus merchant some years before. In Damascus, a weaver was found drina II described scenes in that city of which she could have had no knowledge _scenes that had captured the imagination of Alexandrina I.

Has Morey Bernstein’s sensational Bridey Murphy exploration added an important new clue to the mystery of life before birth and after death? Did Ruth Simmons, or her “soul-mind,” really live before as a 19th century Irish lass?

Psychiatrists point out that her outpourings could have been buried childhood memories of stories that Ruth had read or heard about Ireland. And in deep hypnosis, with the hypnotist in full control, the subject often takes a question or suggestion as a command and will very obligingly—and with an amazingly easy flow of speech—invent details to fit the requirement.

Both Bernstein and Ruth Simmons are above suspicion of fraud. Quite obviously they believe they have stumbled onto a genuine manifestation of reincarnation.

Is there any final authoritative verdict for or against reincarnation?

Most of the learned men of the West scoff in total disbelief. Yet Tennyson, Longfellow, Whitman, Goethe, Victor Hugo, Thomas Huxley, Sir Walter Scott, Ibsen, Spinoza are only a few among the glittering names espousing pre-existence in some form or other.

The great scientist, Thomas Huxley, stated that, “None but the very hasty thinkers will reject reincarnation on the grounds of inherent absurdity.”

We must remember the fate of dogmatic scoffers. Simon Newcomb, American scientist, positively “proved” that the airplane could never fly. Professor Erasmus Wilson in 1878 scorned the electric light as a silly parlor trick. And they were dealing with concrete things they could examine for themselves. How much harder to give a flat “yes” or “no” to an intangible thing like the fate of human souls.

You have seen some of the evidence pro and coin. You will have to judge for yourself.

Have you lived before? Could you, with proper help, recall scenes from other ages, other lands, other lives?

MORE ABOUT HYPNOSIS
Interested in learning more about the fascinating subject of hypnosis? Write to the following addresses for information on home study courses, books, pamphlets and recorded lessons . . .

On your newsstand now: Fawcett Book 308, The Art of Hypnotism, by Joan Brandon.