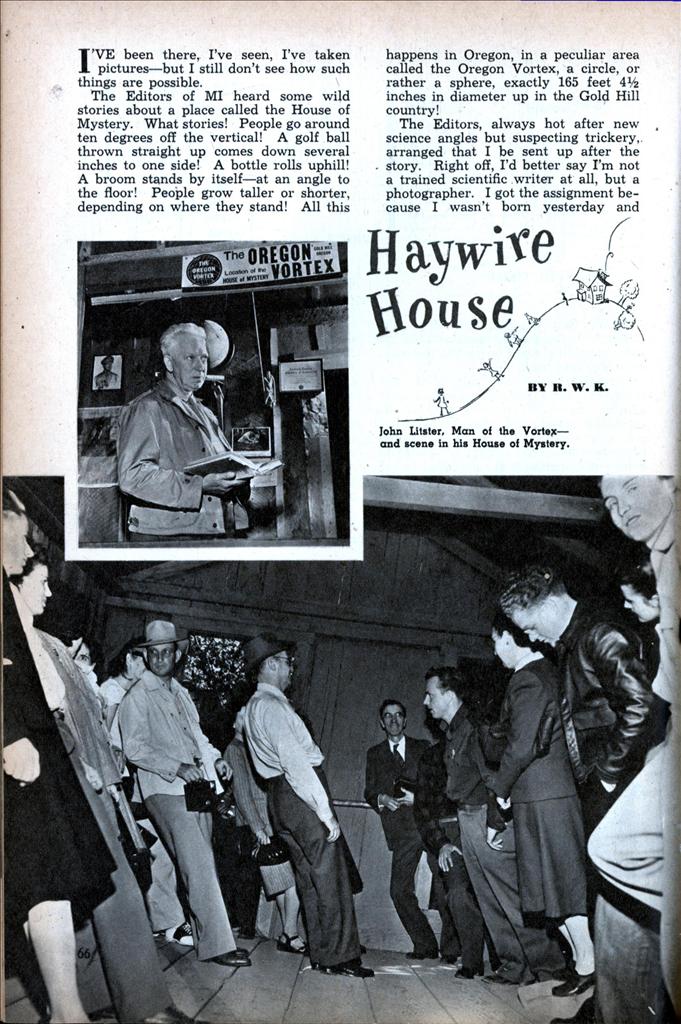 I’VE been there, I’ve seen, I’ve taken pictures—but I still don’t see how such things are possible.

The Editors of MI heard some wild stories about a place called the House of Mystery. What stories! People go around ten degrees off the vertical! A golf ball thrown straight up comes down several inches to one side! A bottle rolls uphill! A broom stands by itself—at an angle to the floor! People grow taller or shorter, depending on where they stand! All this happens in Oregon, in a peculiar area called the Oregon Vortex, a circle, or rather a sphere, exactly 165 feet 4-1/2 inches in diameter up in the Gold Hill country!

The Editors, always hot after new science angles but suspecting trickery,, arranged that I be sent up after the . story. Right off, I’d better say I’m not a trained scientific writer at all, but a photographer. I got the assignment because I wasn’t born yesterday and because I know my camera angles. They figured if there was any optical trickery involved I’d catch it.

I’ll say right here that the House of Mystery is still a house of mystery to me.

I was plenty skeptical when I arrived. Right away John Litster, owner of the works, looked me in the eye. “Keep alert here,” he warned. “You’ll need all your skill. I won’t promise that your pictures will come out. You may have to come back several times.”

I certainly tried to be alert.

First he took me to a place where there were two concrete blocks a couple of feet apart, separated by a line. The line, he said, marked the edge of the Vortex, one block being outside and one in. He stood me on one block and himself stood on the other.

“Now, sight along a line level with your eyes and see what part of my face comes into view,” he directed. I did it, and found myself looking at the top of his head. I was the taller one.

“Now let’s swap positions,” he said. We did that—and now I found myself looking squarely into his eyes! I couldn’t help myself! I was amazed! He was taller! I tried it again. I experimented. The concrete blocks were level and even with each other in the ground!

^While I was trying to fathom the secret, a dozen tourists gathered to be token through the House, and I joined them. As we stood outside the Screwy Circle, Litster told us to cross over carefully, then stop and stand perfectly still, and we’d actually feel the change of balance. We did it. He was right! It were as though a strong wind were blowing us over toward magnetic north! We were to remain at this odd angle, sometimes greater than 10 degrees, during all our stay.

After this we were led through a rickety gate in a high board fence, and inside found ourselves in a small yard flanked on one side by the House of Mystery itself, left just as it had fallen during an earth slide many years ago. The crooked doorway captured our eyes. One elderly woman, livid with fear, refused to go a step farther.

At the doorway our guide told us to watch our balance carefully when entering because we could very easily fall up! At this advice a few ladies giggled and one old gent smiled and expertly arced a gob of tobacco juice between two rotting boards. But when we filed in we found he spoke the truth! The floor was at an angle, and standing was made difficult by the pull of some mysterious force!

In the House the experiments began. A girl was told to push a 28-pound weight, suspended from the ceiling, in a certain direction. She did it with ease. But when she tried to push it the opposite way it took all her strength! A golf ball tossed straight up fell inches to one side! These aberrations were due to the magnetic pull of the vortex of electrons, according to Litster, who says the House of Mystery puzzle is based on the same principle as a vortex. I looked up that word “vortex” as soon as I back, and I guess I’d better put down what

the dictionary, It was: “1. A mass of fluid, especially of a liquid, having a whirling or circular motion tending to form a cavity or vacuum in the center of the circle, and to draw toward this bodies subject to its action. 2. A supposed collection of particles of very subtle matter endowed with a rapid rotary motion around an axis which was also the axis of a sun or a planet. Descartes attempted to account for the formation of the universe, and the movements of the bodies composing it, by a theory of vortexes.”

That same golf ball, put on the floor, began rolling uphill! And it was uphill: any customer who doubted that could check it with a level.

A girl, on instructions from the guide, was told to back slowly up into a corner. She did so, but couldn’t control her momentum; she suddenly felt herself “fall up,” and slammed noisily against the wall!

At one place there were two poles marked off in inches. On one, a man’s height would be six feet, say, but on the other, only a few feet away, there would be a difference of an inch, and sometimes more!

A plumb line was suspended from the branch of a tree. Normally the bob and cord would hang straight down—but when we stood in back of it with the bob between our feet, the cord passed nearly in front of one ear!

I learned that many years ago the Indians regarded the area of the Vortex as a place of evil spirits. It is said that horses shied when they neared the place. The House of Mystery was erected as an assay office when the white man first came that way in search of gold, and its present owner, John Litster, claims he discovered the oddities of the area some 17 years ago and now stars them in a roadside sideshow to finance his study of the region.

I must say that the place seems a very profitable attraction, and I also must say that Litster was very friendly and cooperative.

These, then, are the highlights of the story. You see the pictures, just as my camera caught them.

To me, the House of Mystery is still a mystery. I’m not enough of a physicist to understand just what this vortex force is. I bought Litster’s “Notes and Data” booklet on it, but I bet Einstein himself couldn’t make head or tail of that.

The Editors of MI smile whenever I tell how wonderful everything was, and when I ask why, they smile even more—but they won’t tell me a thing. Maybe they’re putting on an act, but I don’t know. I was there. I saw these things. What can account for what happens?