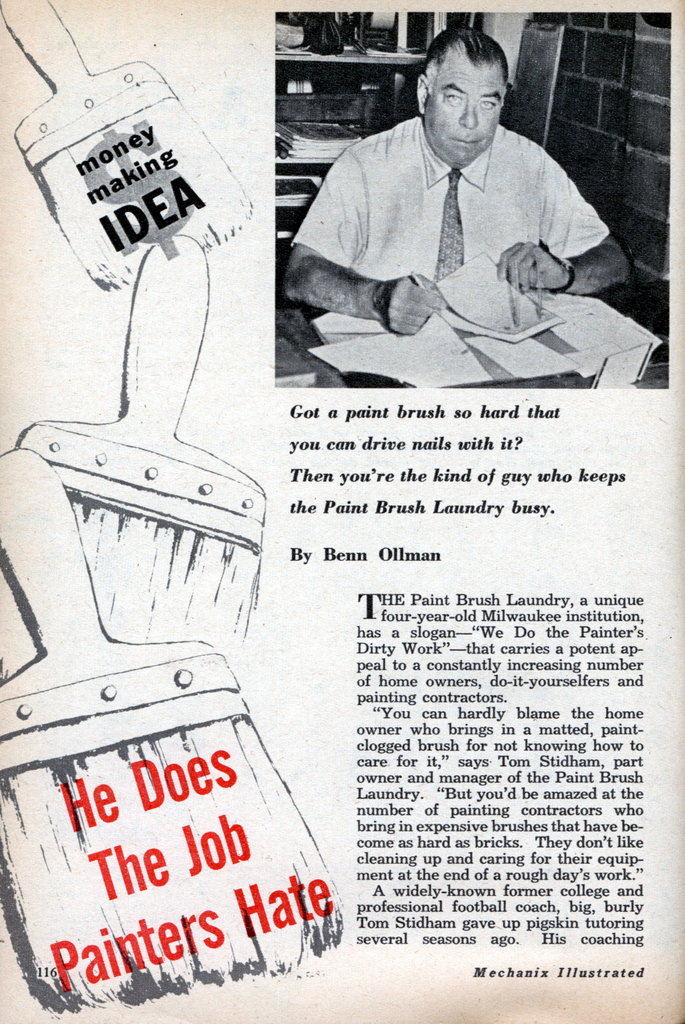 He Does The Job Painters Hate

Got a paint brush so hard that you can drive nails with it?
Then you’re the kind of guy who keeps the Paint Brush Laundry busy.

THE Paint Brush Laundry, a unique four-year-old Milwaukee institution, has a slogan—”We Do the Painter’s. Dirty Work”—that carries a potent appeal to a constantly increasing number of home owners, do-it-yourselfers and painting contractors.

“You can hardly blame the home owner who brings in a matted, paint-clogged brush for not knowing how to care for it,” says Tom Stidham, part owner and manager of the Paint Brush Laundry. “But you’d be amazed at the number of painting contractors who bring in expensive brushes that have become as hard as bricks. They don’t like cleaning up and caring for their equipment at the end of a rough day’s work.”

A widely-known former college and professional football coach, big, burly Tom Stidham gave up pigskin tutoring several seasons ago. His coaching record included successful years’ work at Oklahoma, Northwestern and Marquette and with the Baltimore Colts and the Green Bay Packers. He now divides his time between the Laundry and his job as a manufacturer’s representative.

About 200 customers a month use the service of the Paint Brush Laundry, bringing in an average total of about 1,000 brushes. Most of them are local home owners bringing in a brush or two that they “forgot about” until the time came to tackle the next painting or varnishing job. With the cost of new paint brushes climbing to new heights, just knowing about the Paint Brush Laundry can save them a few dollars.

on view in the office. Stidham keeps a number of brushes near his desk which are actually hard enough to drive nails. When called upon to demonstrate samples of his firm’s work he frequently will slam some nails with these brushes to drive home his point.

One prize refugee from paint brush oblivion is a gnarled, cement-hard set of bristles that had lain forgotten in an attic for over 25 years before it found its way to the Laundry. -Stidham had half the brush restored to show “before and after” potentialties to his customers.

“No matter how old and neglected a paint brush made with top quality bristles may get, it can be put back in working condition with the right solvents and patient scrubbing,” says Tom. It often takes as long as six weeks to turn the trick, but it can be done.

hard work and a rudimentary knowledge of chemistry. A dozen chemicals are used, as well as an assortment of thinners, secret compounds originated by former owner Waite, vegetable soaps, light oils, acids, kerosene and fuel oil.

Elbow grease takes over when the brushes have satisfactorily completed the soaking processes. The brushes are massaged on old fashioned, ordinary washboards over an open wire-covered vat to loosen up the bristles, then given a final rinsing before being hung on racks and placed in the drying oven. When the brushes are dry the handles are polished on a buffing wheel and given a coat of clear varnish. The brushes are then wrapped in heavy paper and placed in numbered boxes on the shelves until they are picked up or shipped back to out-of-town customers.

How much does the Laundry charge for the service ? “Our prices have to be low enough to make for real savings,” says Tom. “If the difference between the rates we charge and the cost of buying new brushes were only a matter of a few dimes or nickels we’d soon be out of business.” Paint Brush Laundry prices are now only about half of what they were a few years back when the Korean War first skyrocketed brush costs by causing a severe shortage of Chinese hog bristles. Brushes up to 2Vz inches wide are cleaned for 59 cents each; from three to four inches, for $1.42; from 4% inches up, for $1.76.

An important sideline is selling reclaimed brushes at bargain prices ranging from 50 cents to $10 per brush. Former owner Waite relied mainly on dump scavengers who kept their eyes open for the $10,000 to $15,000 worth of paint brushes which are tossed into garbage pails each year in Milwaukee alone. Nowadays the bulk of the brushes sold are discards from painting contractors and factories. Most of the reclaimed’ brushes are sold to factories for rough paint work, applying oils and chemicals to machinery, or on a number of other jobs.

What about paint rollers? “Not for us,” says Tom Stidham. “We haven’t had much success with them. They tend to curl up when put through the solvents.”

as long as people continue to be too busy, too tired, or too lazy to put in that 15 minutes of work cleaning their brushes. •