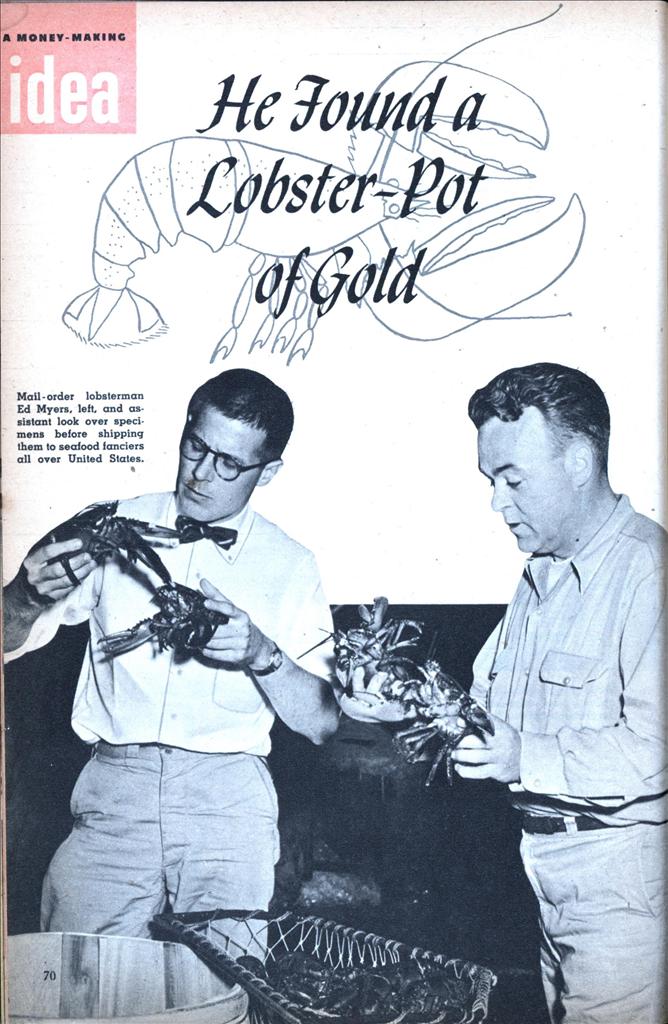 He Found a Lobster-Pot of Gold

Ed Myers migrated from Princeton to Maine and he found it paid off to send live lobsters on long trips, too.

“YOU’RE crazy!” lobstermen told Ed Myers when he informed them he was going to ship live Maine lobsters direct to homes of seafood lovers all over the country.

“Who ever heard of selling live lobsters by mail!” friends chided.

One objection after another piled up to plague his plan. How could anyone shatter the traditional channels of trade—from lobsterman to distributor to wholesaler to restaurant to consumer? Impossible! It just couldn’t be done.

Well, it couldn’t be done only until Ed Myers went ahead and did it. For, possessed with his idea, some Yankee ingenuity arid less than a $1,000 of capital Ed actually put his crazy idea into operation.

Today, from his Saltwater Farm in picturesque Damariscotta, Me., Myers sells live Maine lobsters and fresh clams nestled in rockweed, packed in special metal containers. And they are expressed all over the country in pine casks.

Saltwater Farm guarantees that the lobsters and clams will arrive alive within 1,800 miles for any date specified—or else you get your money back.

Preparation of the mail-order clambakes is relatively simple. All you have to do is punch a few holes in the lid of the metal container in which the lobsters arrive, then add some salt water, put on the stove until 15 minutes after steam starts. Before you know it, you have a delicious clambake just as prepared by Down Easters.

To date, Myers has shipped more than 20,000 live lobsters direct to consumers. Watching his crazy idea in operation has not only been profitable but lots of fun, he says. However, it wasn’t that way in the beginning.

His venture started in 1949 in a roundabout manner. Ed, his wife Julia and their two sons were living in Princeton, N. J. where he was an administrative officer at the University. It was a comfortable life.

Somehow, though, the Myers had a hankering for Maine. They had been there before and loved it. Soon, they were ready to give up everything to settle there. Needless to say, friends and relatives tried to discourage them about this apparently foolish notion.

But they had made up their minds. So Ed went on ahead to look over the situation. First, he went to Portland. Scouting around for a suitable business venture, he found a few that looked good. But he wasn’t entirely satisfied.

One day he engaged a lobster fisherman in conversation. The man bemoaned the fact that his profits were small compared to the money that was being made by middlemen who processed the lobsters for the consumers.

This aroused Ed’s curiosity and he instituted a private investigation, talking to canners, lobstermen, seaweed distillers, shippers and newspaper editors. He became convinced that somewhere in the lobster business there was a place for him. However, he was low on cash and short on technical skill.

“So I got a job in a Penobscot Bay lobster plant,” recalls Ed, “where I studied packing and shipping methods. I took note of the fact that lobsters were graded for size and tossed into tanks circulating with seawater to await shipping to market.”

Then, during the evenings he experimented with a variety of metal containers to learn how long lobsters would live in restricted air. Like a trained scientist on the trail of a hot medical cure, Myers kept track of his subjects in the containers daily.

Next, he began to play around with methods of icing barrels. He gave the barrels the works—tossing them around, rolling them in various directions, kicking them and giving them treatment similar to the beating they might take from expressmen. Then, he checked on the lobsters. Sure enough, they were alive and kicking.

But would the shipment actually stand up outside? There was only one way to get the answer. He shipped the first barrel to his wife in Princeton. She raved about the clambake. Then he sent some barrels to relatives in Ohio. They raved about the succulent Down East dinners and wanted more. Friends heard about the expressed clambakes. They, too, wanted them.

So, Ed Myers and family took a chance and decided to shoot the works on the newfangled project. He gave up his job and started to advertise. The ads were small but they brought in orders. By this time he had sent for Julia and the children and they worked in an office off their home kitchen, processing the mail orders. The youngsters stuffed envelopes with confirmations of orders.

Business boomed. As a result, he made a deal with a company to supply him with rock-weed, barrels and ice. In the meantime, Ed looked around for a container manufacturer and finally found a firm that would deliver to his specifications a metal job that was rigid, sanitary and able to withstand both ice and the heat of a stove or barbecue.

Leaving no stone unturned, he investigated shipping methods. At first, he thought of using the mails but found that only turtles and alligators are permitted to be mailed. Then he got around to talking to an express agent. Together, they worked out a plan and Ed’s shipping problems were soon solved. On long hauls, the express company re-ices casks if shipments require it. So, customers from Maine to California are now deluging him with orders.

“I select the lobsters fresh from the cold waters of Maine,” says Ed. “picking the plump, solid ones, about a pound-and-an-eighth in weight. This is the best eating size because the meat is at its tender, delicious best. Then I pack the selected lobsters between layers of rockweed in our ready-to-cook metal container. The container is put in a pine cask packed with ice and rushed to the customer for the date specified.”

One of his clambake specials consists of eight live lobsters and a half peck of steamer clams which sells for $14.95. Clams and lobsters are packed together, ready to cook, right in the metal container.

The biggest order Ed ever shipped to an individual was 600 lobsters for arrival on a Thursday and 600 more for arrival the following day. The host must have anticipated a good party.

When business got too big to handle from his home. Ed rented an office in town and hired a secretary to handle the mail orders and other details. Now, the office staff alone numbers six persons.

As in most business ventures, Ed ran into some difficulties in the beginning. There was the time, for instance, that Saltwater Farm shipped a lot of orders the day before the railroad firemen went out on a strike. As a result, Ed had to sell the lobsters wherever they happened to be—to local fish markets and usually at a loss. Then he burned up the long-distance telephone wires, calling each customer to explain the unfortunate situation. He made many friends that way.

Most of these mishaps are due to the human element in shipping. But they are relatively minor and constitute less than one per cent of all Saltwater Farm’s shipments.

An occasional unusual request comes in with an order, such as the time they were asked to write the place cards for a Cedar Rapids birthday party on the lobsters themselves. This was done with black layout pencil which did not show when the lobsters were green.

Yes, Ed Myers and family now live on a peaceful hill in their chosen state and their quaint house looks down over the majestic tides. What does it all prove? Well, if nothing else, that some pots of gold are lobster pots.