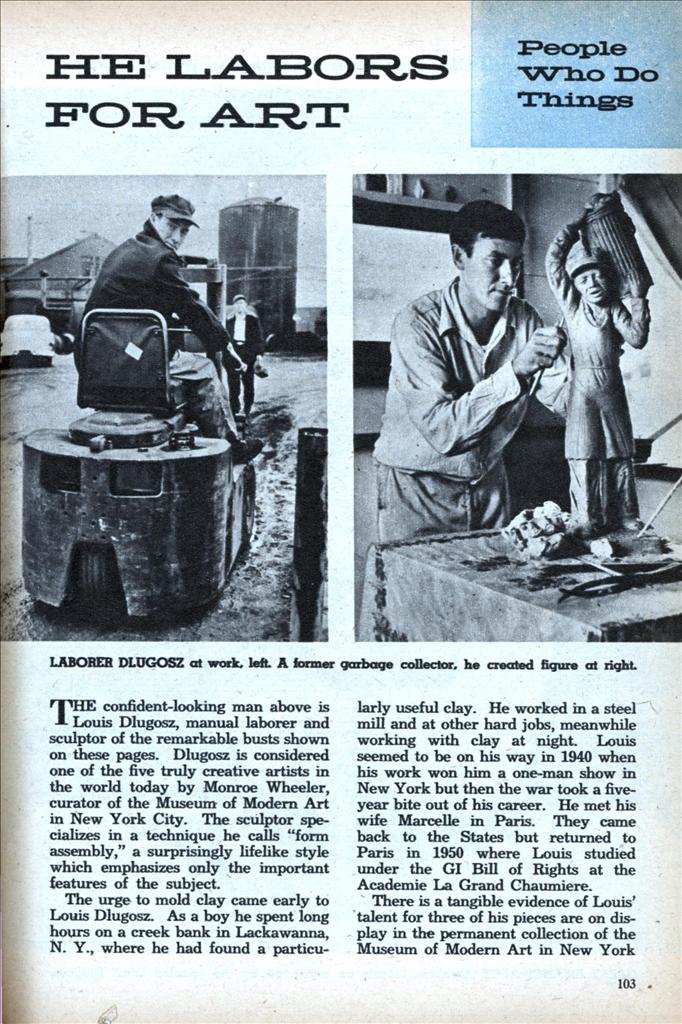 HE LABORS FOR ART

THE confident-looking man above is Louis Dlugosz, manual laborer and sculptor of the remarkable busts shown on these pages. Dlugosz is considered one of the five truly creative artists in the world today by Monroe Wheeler, curator of the Museum of Modern Art in New York City. The sculptor specializes in a technique he calls “form assembly,” a surprisingly lifelike style which emphasizes only the important features of the subject.

The urge to mold clay came early to Louis Dlugosz. As a boy he spent long hours on a creek bank in Lackawanna, N. Y., where he had found a particularly useful clay. He worked in a steel mill and at other hard jobs, meanwhile working with clay at night. Louis seemed to be on his way in 1940 when his work won him a one-man show in New York but then the war took a five-year bite out of his career. He met his wife Marcelle in Paris. They came back to the States but returned to Paris in 1950 where Louis studied under the GI Bill of Rights at the Academie La Grand Chaumiere.

There is a tangible evidence of Louis’ talent for three of his pieces are on display in the permanent collection of the Museum of Modern Art in New York City. His work has also been exhibited and won high praise in New York’s Riverside Museum, Kansas City’s Nelson Gallery and several other galleries. The Garret Club in Buffalo has shown some of his work, too.

Louis is employed by the Electro Refractories & Abrasive Corp. of Lackawanna. He, his wife and six-year-old son Michael live in a house crowded with his sculpture. His ambition is to make a living from his works of art or from teaching his unusual and eyecatching form assembly techniques to youngsters. In the meantime, Dlugosz labors for his art.