Modern Mechanix
Issue: May, 1936
Posted in: Aviation, Photography
Tags: aerial photography, how its made
1 Comment on He Made Sky Mapping a Big Business (May, 1936) 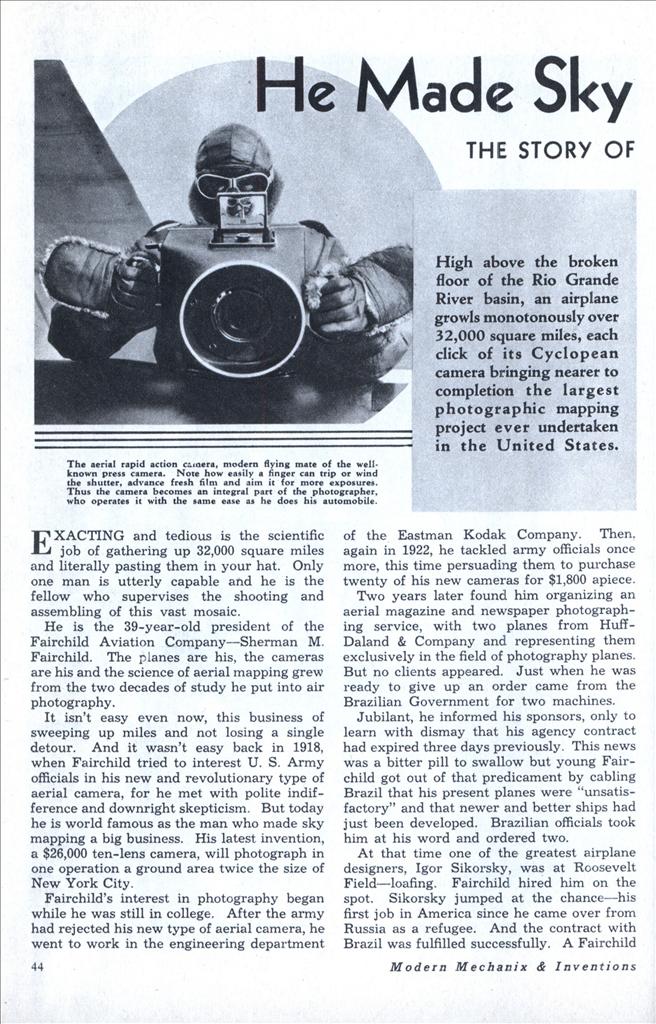 He Made Sky Mapping a Big Business

High above the broken floor of the Rio Grande River basin, an airplane growls monotonously over 32,000 square miles, each click of its Cyclopean camera bringing nearer to completion the largest photographic mapping project ever undertaken in the United States.

EXACTING and tedious is the scientific job of gathering up 32,000 square miles and literally pasting them in your hat. Only one man is utterly capable and he is the fellow who supervises the shooting and assembling of this vast mosaic.

He is the 39-year-old president of the Fairchild Aviation Companyâ€”Sherman M. Fairchild. The planes are his, the cameras are his and the science of aerial mapping grew from the two decades of study he put into air photography.

It isn’t easy even now, this business of sweeping up miles and not losing a single detour. And it wasn’t easy back in 1918, when Fairchild tried to interest U. S. Army officials in his new and revolutionary type of aerial camera, for he met with polite indifference and downright skepticism. But today he is world famous as the man who made sky mapping a big business. His latest invention, a $26,000 ten-lens camera, will photograph in one operation a ground area twice the size of New York City.

Fairchild’s interest in photography began while he was still in college. After the army had rejected his new type of aerial camera, he went to work in the engineering department of the Eastman Kodak Company. Then, again in 1922, he tackled army officials once more, this time persuading them, to purchase twenty of his new cameras for $1,800 apiece.

Two years later found him organizing an aerial magazine and newspaper photographing service, with two planes from Huff-Daland & Company and representing them exclusively in the field of photography planes. But no clients appeared. Just when he was ready to give up an order came from the Brazilian Government for two machines.

Jubilant, he informed his sponsors, only to learn with dismay that his agency contract had expired three days previously. This news was a bitter pill to swallow but young Fair-child got out of that predicament by cabling Brazil that his present planes were “unsatisfactory” and that newer and better ships had just been developed. Brazilian officials took him at his word and ordered two.

At that time one of the greatest airplane designers, Igor Sikorsky, was at Roosevelt Fieldâ€”loafing. Fairchild hired him on the spot. Sikorsky jumped at the chanceâ€”his first job in America since he came over from Russia as a refugee. And the contract with Brazil was fulfilled successfully. A Fairchild cabin monoplane is now a common sight, and this company ranks among the leaders in American private plane production. The corporation has four subsidiaries, manufactures 75 per cent of the world’s aerial cameras and owns the largest aerial picture library in existenceâ€”in fact, the entire world.

Already referred to is Fairchild’s latest surveyâ€”the Rio Grande project. This is the third consecutive job his organization has undertaken for Uncle Sam. The first two were the aerial mapping of Boulder Dam and 25,000 square miles of watershed in the Indian Reservations of Arizona, New Mexico and Utah.

All these jobs, which take in more than 84,000 square miles of terriotory, are part of the government’s program for soil conservation. From the completed maps, experts will be able to plan the control of this vital problem and, in the case of Boulder Dam, will be able to determine in advance the number of auxiliary dams needed to control the silt now being washed into the reservoir from the various tributaries.

Preparing an aerial map involves a tremendous amount of detailed work, work which can be entrusted only to men skilled in the art of aerial photography.

First, before any flying is started a sketch of the operations contemplated is drawn on a master chart, the area being split into small working assignments by dividing it into a number of parallel, rectangular strips. Each strip represents the central portion of photographs to be taken during a single flight across specified ground.

On this master chart is recorded the elevation from which each strip has to be photographed to obtain the desired scale, the altitude in each case being determined mathematically. The chart also shows the various landmarks, for these serve as guides to the pilot and photographer.

When the master chart is completed, the plan of operations is reviewed with the air crew and then the job of “flying the map” is begun. The pilot flies along the guide of flight lines back and forth, forming “strips” until the entire area is covered. Aerial photographic mapping operations are usually flown at altitudes as high as two to three miles, necessitating the use of oxygen by both pilot and photographer.

In mapping large areas a 5-lens camera is commonly used, pointing downward through a hole in the bottom of the plane. The central lens takes a vertical photograph, while the other four lenses simultaneously take oblique shots. The five prints are assembled into one group in the shape of a Maltese Cross (see diagram).

While pilots and photographers ride their aerial pendulums, the ground crew swarm scorpion-like to the control points. This work is very important because it makes positive the accurate piecing together of the individual photographs to form the mosaic map. But securing the ground control points is costly, slow and hazardous work, for the Rio Grande country is mostly on edge.

When the photography work is completed, the films are developed and a set of contact prints turned over to the engineering department. The scale ratio of each print is carefully figured to the known distances on the equivalent terrain. After any accuracies are corrected, the prints are re-photographed to a common, accurate scale.

The central portions of these corrected prints are then cut on lines which are determined by the ground contours and cemented down upon a composition base board, laid out with drawn pencil control lines worked up from previously gathered data. This master map is then rephotographed.