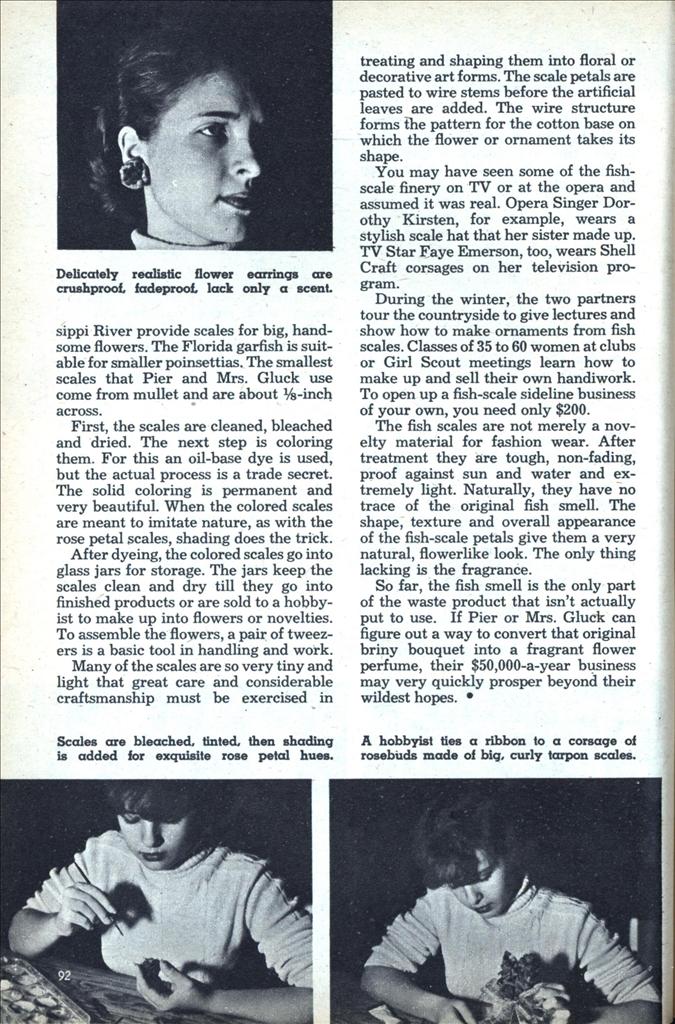 Raymond Pier, a retired 48-year-old auto dealer of Ocean Grove, N. J., got bored with the idle life in Florida. When his eight-year-old daughter came back from the beach one day with a handful of seashells, he wondered if a few novelties couldn’t be created out of the sea’s beautiful but wasted bounty. Then he met Mrs. Florence Gluck, a retired beautician, whose son had been doing handiwork around his house. Since Mrs. Gluck had “smart” hands and a knack for fashioning stylish novelties, they talked about experimenting with some wasted by-products of the sea, such as shells and fish scales.

Together they decided that fish scales might make a good basic material for a new line of costume jewelry and decorations for women’s hats and dresses. Naturally, the scales had to be dried and cleaned till completely odorless. They also bleached the scales so that they could be tinted for use in bright ornaments and flowers of amazing naturalness. It was on May 1, 1947, that Pier and Mrs. Gluck began experimenting. By the following year they had decided to invest $2,000 in a four-month fish-scale business at Pier’s hometown of Ocean Grove, N. J., near Asbury Park.

That first season brought them $6,500 for their experiments. They set up a small store called Shell Craft Hobby Shop. Though the initial business fared remarkably well, the fish-scale enterprise prospered till now it brings in $50,000 a year for the two partners. Pier handles the production and business end of the shop but also makes suggestions for new products. Mrs. Gluck designs their novelties and plans new items to add wider variety to their production.

Orders for their corsages, hats, pins and ornaments come from Africa, Canada, Europe, Alaska and South America, as well as from all 48 states. Prices range from $6.95 to $45 for fish-scale hats. Costume jewelry, including necklaces, pins and dress ornaments cost from 98 cents to about $6.

The first step in converting fish scales into a fancy hat is to buy the dried fish scales which come in 100-gallon lots, packed in burlap bags. Main sources are the big Florida fishing centers. Liquid measure is used because it’s easier to measure the scales by volume than by weight when you’re dealing in large quantities.

Scales of the Florida red snapper are most frequently used in transforming fish into a chic new bonnet. For making lifelike carnations, scales from the bone fish are best. Tarpon scales, removed by pliers, form the large petals for such flowers as American Beauty roses, because the scales may be up to 2% inches across. Their tendency to curl when dried enhances their natural-flower look. For poinsettia, garfish from the Mississippi River provide scales for big, handsome flowers. The Florida garfish is suitable for smaller poinsettias. The smallest scales that Pier and Mrs. Gluck use come from mullet and are about 1/8-inch across.

First, the scales are cleaned, bleached and dried. The next step is coloring them. For this an oil-base dye is used, but the actual process is a trade secret. The solid coloring is permanent and very beautiful. When the colored scales are meant to imitate nature, as with the rose petal scales, shading does the trick.

After dyeing, the colored scales go into glass jars for storage. The jars keep the scales clean and dry till they go into finished products or are sold to a hobbyist to make up into flowers or novelties. To assemble the flowers, a pair of tweezers is a basic tool in handling and work.

Many of the scales are so very tiny and light that great care and considerable craftsmanship must be exercised in treating and shaping them into floral or decorative art forms. The scale petals are pasted to wire stems before the artificial leaves are added. The wire structure forms the pattern for the cotton base on which the flower or ornament takes its shape.

You may have seen some of the fish-scale finery on TV or at the opera and assumed it was real. Opera Singer Dorothy Kirsten, for example, wears a stylish scale hat that her sister made up. TV Star Faye Emerson, too, wears Shell Craft corsages on her television program.

During the winter, the two partners tour the countryside to give lectures and show how to make ornaments from fish scales. Classes of 35 to 60 women at clubs or Girl Scout meetings learn how to make up and sell their own handiwork. To open up a fish-scale sideline business of your own, you need only $200.

The fish scales are not merely a novelty material for fashion wear. After treatment they are tough, non-fading, proof against sun and water and extremely light. Naturally, they have no trace of the original fish smell. The shape, texture and overall appearance of the fish-scale petals give them a very natural, flowerlike look. The only thing lacking is the fragrance.

So far, the fish smell is the only part of the waste product that isn’t actually put to use. If Pier or Mrs. Gluck can figure out a way to convert that original briny bouquet into a fragrant flower perfume, their $50,000-a-year business may very quickly prosper beyond their wildest hopes. •