Mechanix Illustrated
Issue: Nov, 1956
Posted in: Nautical
Tags: diving, People Who Do Things, swimming
1 Comment on He Makes Fish Out of People (Nov, 1956) 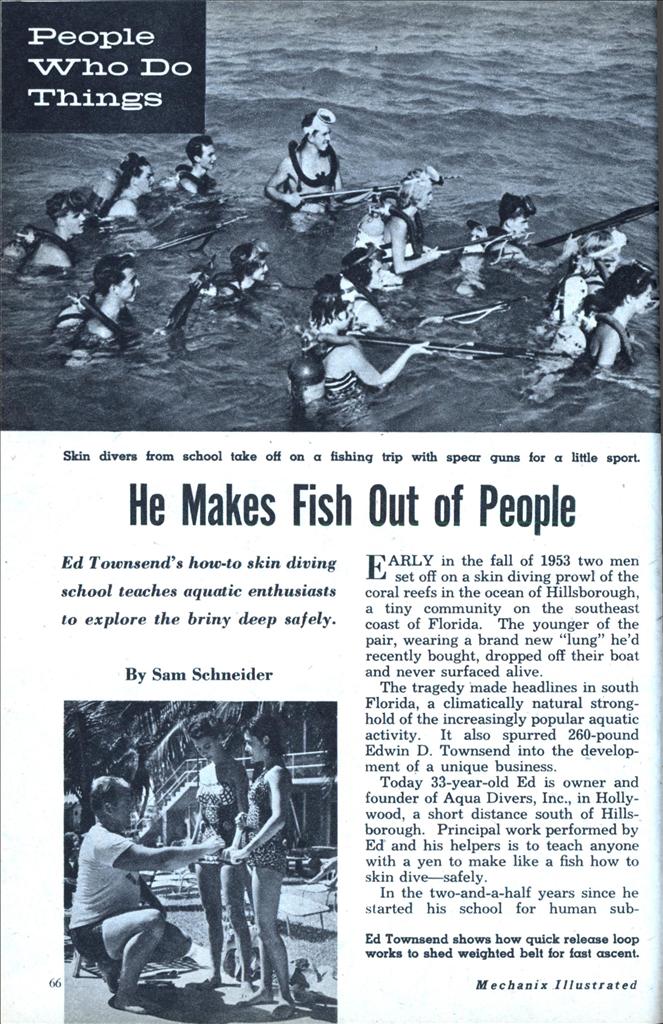 He Makes Fish Out of People

EARLY in the fall of 1953 two men set off on a skin diving prowl of the coral reefs in the ocean of Hillsborough, a tiny community on the southeast coast of Florida. The younger of the pair, wearing a brand new “lung” he’d recently bought, dropped off their boat and never surfaced alive.

The tragedy made headlines in south Florida, a climatically natural stronghold of the increasingly popular aquatic activity. It also spurred 260-pound Edwin D. Townsend into the development of a unique business.

Today 33-year-old Ed is owner and founder of Aqua Divers, Inc., in Hollywood, a short distance south of Hillsborough. Principal work performed by Ed and his helpers is to teach anyone with a yen to make like a fish how to skin dive—safely.

In the two-and-a-half years since he started his school for human sub- marines, Ed has taught 3,700 people how to use self-contained underwater diving equipment. Most of his graduates now skin dive for fun; a few have gone on to make it pay commercially.

Pupils at the school have ranged in age from 67-year-old Mrs. Alice B. Carpenter, of Port Washington, L. I., N.Y., to a six-year-old Florida miss. How well the elderly lady grasped the technique of skin diving was demonstrated by the fact that Ed took her on one of his periodic cruises to the Bahama Islands, not far from the U.S. mainland, for her “seminar.”

In the great fishing grounds off Bimini, Ed watched closely while the graying Mrs. Carpenter splashed off the boat and submerged to 80 feet. She stayed down, exploring the bottom, for about 20 minutes. The thrill for both Ed and the lady was double, for Mrs. Carpenter is his mother.

A bosun’s mate in the Coast Guard during World War II, Ed had been skin diving as a hobby for a few years prior to the Hillsborough drowning. Reading the news stories, he felt that no mechanical error was responsible. He asked to test the lung used by the victim.

With the police chief, Ed outboarded to the reefs. Strapping on the tank, and even donning the dead man’s flippers and mask, Ed jumped in. He swam to a depth of 160 feet, paddled about a couple of minutes, then ascended slowly. The lung worked perfectly.

“I was prepared to testify at the coroner’s inquest,” Ed recalls, “that the poor fellow had most likely died because of a seizure of fear. I was convinced that not enough people know how to skin dive properly. It’s a wonderful recreation and can be no more dangerous than a fast game of tennis— if the skin diver has the correct knowledge and is given the right training.”

Panic is the worst possible thing for a skin diver, whether amateur or professional, deep in the astonishing water world. Townsend’s course of skin diving instruction eliminates the factor of fright and thus permits the swimmer to enjoy in safety a genuinely exciting pastime.

Ed’s course is uncomplicated. MI readers who wish to learn how to skin dive will find it easy to follow.

Lining his pupils up at the side of the pool, the burly teacher hands each a web belt strung with round weights. The belt is strapped about the waist with the weights at the small of the back. The belt is passed through two metal loops rather than a buckle, and the end of the belt is then folded back under one loop to form a half bow. The free end of the belt, when pulled sharply, causes the half bow to slip back through the metal loop and presto! the whole belt falls off. This is called a quick release loop.

The weight about the midsection is necessary, Ed explains, to trim the diver to neutral buoyancy. Without it, the body will rise in the water.

Next comes the rubber mask with its glass faceplate. This article he takes in both hands and flanges out the corners with thumb and forefinger. Applying the mask to the face, he shows that the top runs across the forehead at about the hairline, while the bottom rests on the upper lip just under the nose.

The glass plate is held firmly with one hand, while with the other he fingers the circumference of the rubber rim to be certain it isn’t caved in anywhere and thus admit water. The strap is then adjusted over the head.

These articles should be handled quickly, familiarly, Ed stresses. The class is requested to repeat donning the belt with its quick release loop, and the mask, several times.

Frogmen’s flippers are placed on everyone’s feet. Townsend orders the masked, weighted pupils into the pool, instructing them to use only the feet for propulsion. “You must forget the habit of breathing through the nose,” he counsels. “The mouth does all the work now.”

For those who fear they will sink because of the weights, Townsend swims into the deepest part of the pool, takes a deep breath and ducks under. His motionless body rises and emerges from the water. Then, he flaps his flippered feet gently and treading water, holds his head above the surface with ease.

The psychological effect of this demonstration is always strong. Convinced it’s easier to stay air-side than waterside, the pupils emulate the master. After a few tries, Ed instructs the class in making surface dives. Though non-swimmers usually find this difficult in the beginning, the important thing is that Ed has already removed much of their fear of the water.

“Now, take a deep breath,” he says, “surface dive to the bottom of the pool and sit there for about 15 seconds. It will relax you.”

A floundering, splashing derriere-display occurs as pupils up-end and dive down. Townsend accompanies them to the bottom, swimming from one to the other and nudging them gently until all are seated. Whether the students realize it or not, they are acquiring control over their breathing and propulsion under water. This is part of the confidence-buildup the would-be diver needs.

Masks are left on while Townsend begins fitting the lungs. His purpose is to continue the swimmers in the habit of mouth-breathing, to accustom them to the mask.

Shoulder straps, also of web belt, are tied across the chest with the identical quick release loop as the weighted belt; belly straps girdling the waist are adjusted in the same manner.

The rubber mouthpiece at the center of the U-shaped breathing tube connected to the air tank’s regulator is placed in the mouth. The lips are put over a flange and the student bites on two good-sized “teeth” protruding from the bit (between the rubber teeth is the hole from which air is drawn). Gripping the mouthpiece in this fashion insures the breathing tube will be watertight at the mouth.

Ed explains that the compressed air from the 40-pound metal tank comes in via the right hand tube, and the breath is expelled forcibly out the left tube, through a flapper valve, in the regulator. Inhaling and exhaling is accomplished through the mouthpiece. The regulator operates on demand—one must suck in air forcibly when it’s needed; it does not supply a constant flow.

“Should water get into the breathing tube, you can either swallow it—definitely not recommended—or blow it out through the flapper valve,” Ed says. He demonstrates the latter procedure by ducking his head under the water with the mouthpiece out and allowing it to fill up.

Students try it on the surface, performing the sideward-backward sway with a tubeful of water until each clears the breathing device successfully. In the shallow end of the pool, with the class on its hands and knees, the process is repeated.

“The depth of the water doesn’t matter,” Ed says. “The tube can be cleared wherever you may be skin diving.”

Should the mask, too, become filled with water, the method of draining it while submerged is also accomplished easily. Ed scoops up a maskful and claps it over his face. Slowly, he tilts his head to the left and rolls back so the left hand corner of the mask is down. With his right hand, he presses the palm softly against the right corner (the uppermost side of the mask now). At the same time, he snorts sharply through his nose.

The action is similar to that of a pump, forcing the water out of the mask at the lower end.

Underwater, the students must duplicate their teacher’s motions. He assists the first time they shed mask and lung. When shucking all the gear, he makes clear with his graphic hand signals that the beginner must start with the mask. .Purpose behind this is that sometimes in pulling the breathing tube over the head it bumps into the mask and might frighten the student.

Final stages of Townsend’s course take place above water. Togged out, he shows how to get into the water as though from a boat. If the craft has no deck, the diver sits on the gunwale, back to the water.

For a boat with a deck, Ed demonstrates a forward jump. Simply leap or walk feet first into the water. Diving headfirst is forbidden for the regulator can hump up and stun or injure the swimmer.

Completing the pool checkout, Ed carried the diving equipment in his hands, ascended the low diving board and jumped in feet first. When he emerged perhaps a minute later, he was completely “dressed out” and ready for underwater work or play. The class is required to do the same.

Pupils desiring an ocean trip are taken out to the reefs in Ed’s boat. Either singly or in a group, he guides them on a tour of the fascinating coral formations. For the pool checkout and reef-roving junket combined, Ed charges $18. Price of the pool alone is $8, and “If anyone scares out or otherwise doesn’t complete the course,” he says, “they pay nothing.”

Each sailing-diving voyage to the Bahamas that Ed conducts has been attracting a bigger passenger list. He charges $65 for a three-day cruise, furnishing diving equipment, food, beverages and lodging. So far, after nearly 30 such trips, he’s beginning to worry. One fine day at the rate he’s going, he’ll have to ferry his people to the Bahamas with a vessel the size of the Queen Mary. •