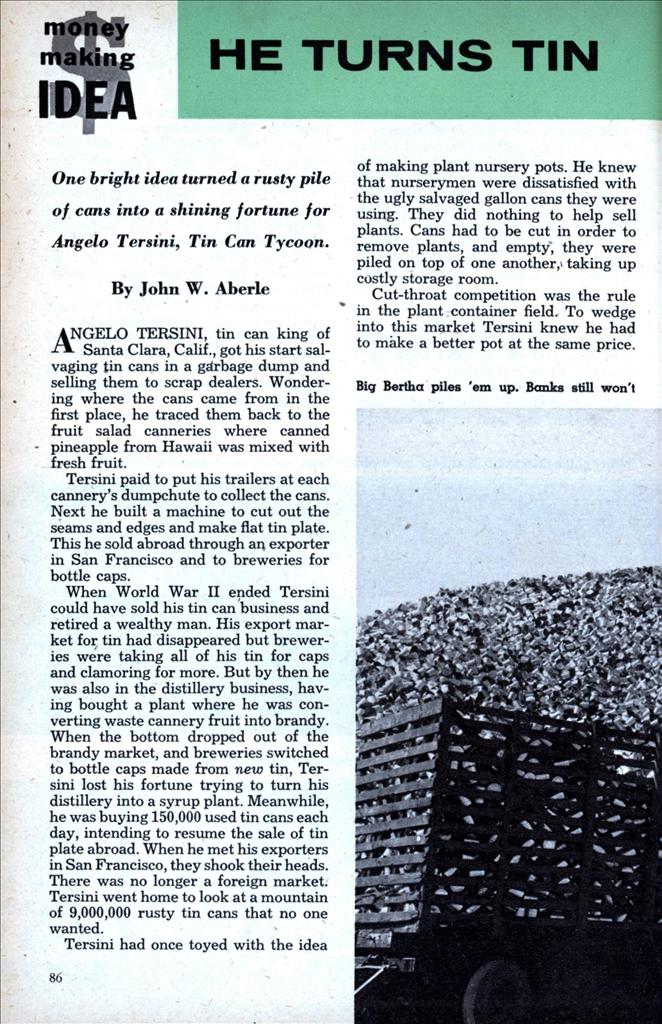 HE TURNS TIN CANS INTO MONEY

One bright idea turned a rusty pile of cans into a shining fortune for Angelo Tersini, Tin Can Tycoon.

ANGELO TERSINI, tin can king of Santa Clara, Calif., got his start salvaging tin cans in a garbage dump and selling them to scrap dealers. Wondering where the cans came from in the first place, he traced them back to the fruit salad canneries where canned pineapple from Hawaii was mixed with fresh fruit.

Tersini paid to put his trailers at each cannery’s dumpchute to collect the cans. Next he built a machine to cut out the seams and edges and make flat tin plate. This he sold abroad through an exporter in San Francisco and to breweries for bottle caps.

When World War II ended Tersini could have sold his tin can business and retired a wealthy man. His export market for tin had disappeared but breweries were taking all of his tin for caps and clamoring for more. But by then he was also in the distillery business, having bought a plant where he was converting waste cannery fruit into brandy. When the bottom dropped out of the brandy market, and breweries switched to bottle caps made from new tin, Tersini lost his fortune trying to turn his distillery into a syrup plant. Meanwhile, he was buying 150,000 used tin cans each day, intending to resume the sale of tin plate abroad. When he met his exporters in San Francisco, they shook their heads. There was no longer a foreign market. Tersini went home to look at a mountain of 9,000,000 rusty tin cans that no one wanted.

Tersini had once toyed with the idea of making plant nursery pots. He knew that nurserymen were dissatisfied with the ugly salvaged gallon cans they were using. They did nothing to help sell plants. Cans had to be cut in order to remove plants, and empty, they were piled on top of one another, taking up costly storage room.

Cut-throat competition was the rule in the plant container field. To wedge into this market Tersini knew he had to make a better pot at the same price.

Unable to sleep one night, he happened to think of a pile of buckets he’d seen telescoped into one another. A moment later he had Duke Triplett, his chief mechanic, on the phone. “Meet me at the plant in half an hour,” Tersini said.

It was then one a.m. By four the next afternoon they’d developed a machine which tapered the can by pressing sharp indentations in the bottom half. The final product looked much like the ridged paper cup one finds beside water coolers. The pots slipped easily into one another. The indentations kept dirt from clinging to the sides. A sharp tap on the bottom and out would come the plant, surrounded by firmly packed earth, The pot could be used over and over.

Tersini obtained a patent on the idea and in high hopes went to the banks for capital needed to re-equip his plant. “How about security?” they asked. He pointed to the 9,000,000 tin cans—and got a horse laugh. He finally got a loan on his wife’s jewelry and used the money to design and build machinery no one else had heard of.

The first year there were headaches galore. While the crimped pots slipped easily into one another, it took two tow trucks to pull them apart. Growing plants made the narrow bottomed pots topheavy; a little joggle and they tipped over. Again Tersini and Triplett put their heads together and came up with a rolling machine that knocked out dents in the pot and put in a lip near the top. They re-designed the crimping die to make the base wider.

Tersini pulled the first dozen pots off the line before they were painted, made a stack of them, then jumped on the top one. They didn’t jam—the lip had done the trick. He filled one with dirt, stuck a heavy iron upright in the center, put the pot in the back of his pickup truck and drove all over town. It didn’t tip over. The topheavy problem was licked.

Just as Tersini’s Pacific Nursery Pots got rolling in 1952, a fire burned him out. “We were too crowded anyway,” Tersini said philosophically. Relocated in a roomier plant, Tersini began to develop new lines of specialized plant containers.

Tersini’s Plantainer—a portmanteau word combining “plant” and “container”—sells at $45 to $50 per thousand compared to the $35 figure for the old style nursery pot. At first there was sales resistance. “Price too high,” customers said. But when plants in the attractive Plantainers out-sold those in plain cans by as much as ten to one, resistance stopped.

Tersini keeps a watchful eye cocked on the whims of nurserymen. When several wanted their pots painted a special color, he obliged.

Not long ago, the sales agent received a letter from a grower: “What you guys should make is a nursery pot that uses less dirt,” it began. Result was the Squattie—one inch shorter than the gallon size Plantainer. The user saves one yard of expensive bedding soil with each 2,000 pots.

The Rosetainer was an answer to growers’ demands for a medium-sized container to house deeper-rooted rose bushes. To make this, flat scrap tin is shaped into a two-gallon can.

Pacific Nursery Pots, Inc., also makes a container for larger shrubs out of the 30-pound egg cans they buy from bakeries.

Tersini has never pretended to be a cost accountant, but he can size up an expensive situation in a jiffy. More important, he figures a way to correct it. Take the problem of storing nine million tin cans. Unless heaped up into the air, they cover a lot of expensive real estate.

Tersini was grumbling about that one day as he watched the pile reach its peak at the top of a 20-foot conveyor. He reached down, picked up some loose cans and started to toss them on the pile. “Wonder if a machine could do this,” he thought. On the back of an envelope, he sketched a Rube Goldberg device. It showed an inclined conveyor dumping cans into a hopper attached to a long tube from which cans were being ejected. Compressed air supplied the propelling force. Mechanics built it just that way.

Today, Big* Bertha—named after the German gun of World War I—hurls 11,000 cans to the top of a 200-foot pile every 15 minutes. Her barrages are fired during the summer when canneries are going full blast. Forty specially-designed trailers moving day and night, keep her supplied with ammunition.

Tersini sums up his business this way: “We get cans at a time when they can’t be used, make them into nursery pots when there isn’t a market, and sell them when we can’t collect.”

What he means is this: As nurserymen plant during the autumn and spring, there’s no immediate market for pots. To have stock when buying occurs, production must continue. But even then, there’s no payment until after the plants are grown and sold.

This long credit wait, Tersini says, puts him in the position of a man trying to raise chickens without eggs. To get eggs—working capital in this case—he’s worked out a deal with Nursery Metal Pots, Inc., his sales agents. They advance him money against future purchases. Most seasonal businesses with a similar problem borrow against their raw materials inventory. But banks still take a dim view of tin cans.

Last year Pacific Nursery Pots, Inc. made shipments to every large state, the Hawaiian Islands, Guam, and Australia. Sales were $300,000. The company paid $50,000 for its cans.

Sometimes visitors to Tersini’s plant kid him about being the world’s Tin Can King. He glances at his mountain of cans and grins: “I’ve jumped into a lot of things in my lifetime, but when I figured a way to make a beat-up can into something useful, I hit the jackpot. I didn’t have to go to Las Vegas to do it, either— it was in my backyard all the time.”

Interested onlookers may observe that few people—even in isolated areas where there is no city trash collection— have piles of 9,000,000 tin cans in their backyards. The Tersini Story bears out the old theory that spectacular successes grow out of spectacular headaches. •