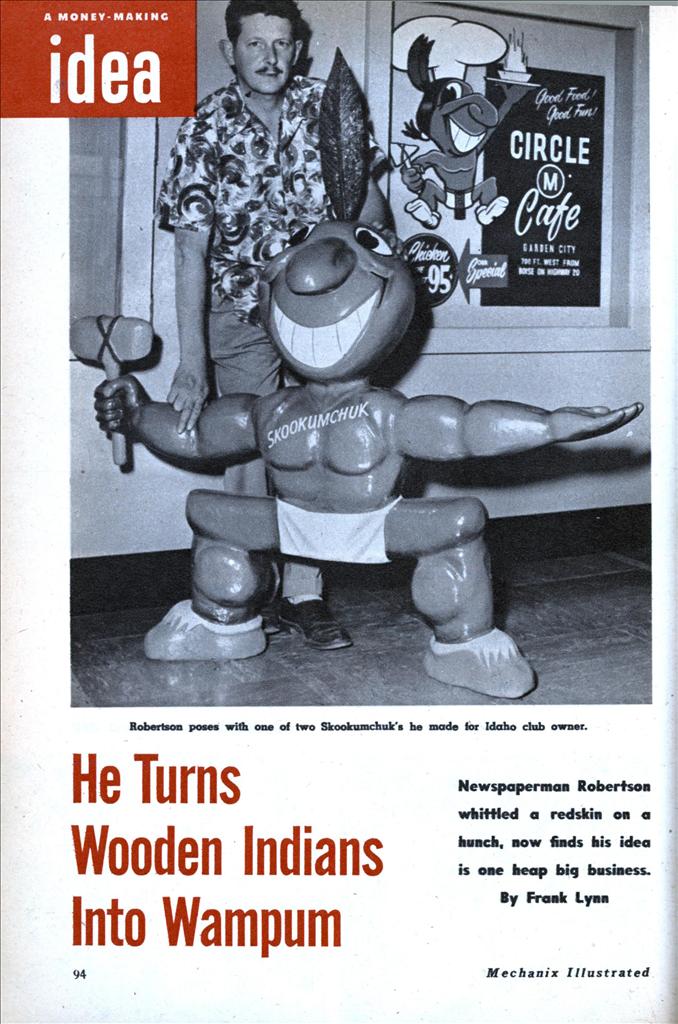 He Turns Wooden Indians Into Wampum

Newspaperman Robertson whiffled a redskin on a hunch, now finds his idea is one heap big business, By Frank Lynn ONE day in 1934, Thayne Robertson, a Boise, Idaho newspaperman whose hobby was carving wooden figures, heard that a wooden Indian was wanted for a Western movie in Hollywood. Although he had never turned a piece of wood into an Indian, Robertson was fixed by the challenge and decided to give it a try with the hope that he would sell the carving to the film company.

In his spare time he felled a large pine tree in a nearby forest and hauled the cleaned log to his garage where he began to chop on it with an ax. As the chips flew, the log was slowly transformed into a life-size model of Sacajawea, the Indian girl who guided Explorers Lewis and Clark across our then untracked continent in 1805. This first masterpiece of the brightly colored Sacajawea, complete with papoose on her back, consumed about 100 hours of Robertson’s spare time.

Although he failed to make the sale to the Hollywood movie producer, he managed to unload the Indian to a private collector. Nevertheless, he was encouraged by the sale and discovered that he could sell numerous wooden redskins but he couldn’t find enough buyers willing to compensate him for the hand labor and long hours involved in processing them. However he continued to carve in his spare time and sold his wares for the best prices . he could get. He averaged about 25 cents an hour. As a result he had to remain at the newspaper to support his wife and two young sons. But Robertson had a lot of faith in his handicraft and looked forward to the day when his wooden Indians would become a profitable business venture.

The payoff came about 10 years ago when new night clubs moved into Idaho and several of them decided they’d try the Indians for advertising. They commissioned the carver to sculpt life-sized figures to order. Working long hours, often late into the morning, the Boise sculptor turned out his pine red men and sold them for $400 each.

Soon he was able to quit his newspaper job and move his garage workroom to a larger downtown shop. Here he concentrated seriously on his new occupation.

From a $100 per year income he graduated to his present annual gross sales of $15,000. His production of wooden Indians is now 25 per year and he sells them for prices ranging from $50 to $1,000 to supermarkets, savings banks, night clubs, curio dealers, museums, tourist traps and for use in various advertising mediums.

Oddly enough, Robertson has never sold an Indian to a cigar store. “They want to buy a life-sized figure for $5” he moans. . In addition to carving wooden Indians, old and new, he will also hand carve or sculpt to order pipes, odd figures, statues, western outlaw heads or full figures from six inches to 15 feet high.

For a Midwestern tourist trap, Robertson ^ carved life-sized statues of Sitting Bull, Billy The Kid, Jesse James, Wild Bill Hickok, John Ringo, Bill Dalton, Belle Starr and Chief Joseph Big Foot. The latter was the famous giant half-breed Indian, over 7 feet tall, weighing 300 pounds, who killed and plundered for years in the hills near Boise. ,He loved a white girl and when she spurned him, he went on the warpath and killed many white settlers.

Simple tools like axes, hatchet, a mallet, chisel, a drawknife and an old jack knife are employed by Robertson in his carving. Since he spent a great deal of time on Indian reservations studying the old and new Indians, he is able to fashion his handi-crafted pieces to look like the real thing and they are much more authentic than their cousins of the 19th Century.

“Many of the old cigar store Indians” explains Robertson, “had pitch-black skin. The Negroid coloring was mainly due to the fact that these first wooden sculptures were made in England and the whittlers had no idea of the copper-hued features.”

Curiously enough, the Boise carver does not work from sketches or drawings except on special pieces. Nor does he bother to do any actual measuring when he begins working on his life-sized figures.

Once he has selected a cured pine log from the trees he has felled, he keeps cutting slowly until a figure emerges—a figure he has mentally sketched. He starts by roughing out the Indian with a double-bitted axe. Then he works a hatchet around the roughed pine wood and carves it with a drawknife. For the finer features he employs a sharp, old jackknife. After the Indian is carved, it is soaked with turpentine and shellacked. Three coats of paint are applied before a final coat of Seal-tite is added.

Every now and then the Indians go an a “rampage” and cause trouble for Robertson. Once he had completed carving an Indian princess for a Honolulu customer. Before finishing the painting and sealing, he discovered to his dismay that the Princess was developing holes in her sides. He was worried but finally he located the trouble—worms—and he poisoned the redskin gnawers with ant powder.

Recently he had to ship a wooden Skookumchuk via plane to a client in Spokane, Wash. “We were late getting to the airport,” recalls Robertson, “and didn’t think that we’d ever get it off on time. But my brother Jack, who helps me with my work, kept the ship from taking off until I bought the Indian’s’ ticket.”

Then there was the time Robertson built a huge crate to ship one of his creations to a customer in Elkhart, Ind. When the railroad pickup truck arrived at the shop to get the crate, the men couldn’t get it out of the shop door. Robertson pondered the situation for a moment. There was only one answer, he reasoned, “We’ll have to remodel the shop.” So he tore down a wall of the workshop and freed his Indian.

Invariably the wooden Indians carved by Robertson create spontaneous interest and local publicity for the owners of the pieces. For instance, he once sold a Sacajawea wooden Indian statue to a Northern Idaho club. A few days later it was kidnapped by a rival Indian tribe.

On another occasion one was stolen from in front of a club by three college boys. When the police caught up with the Indian hijackers they punished the lads by forcing them to carry the 500-pound piece three miles back to the club. The punishment discouraged other college boys from attempting a similar Indiannapping.

Robertson’s major problem is getting the Indians carved on schedule. “We have to work until two, three and four o’clock in the morning most of the time to keep up,” he says. “Our problem is to keep the logs from getting damp or drying too fast while we cure them. We have to store the logs in three different temperatures at various times to get them cured gradually.”

Fortunately Robertson is able to get production in his shop because his two sons, Jon and Quincy, aged 12 and 9 respectively, help with the carving and painting.

Now and then the Indian carver receives unusual requests for his art. Not long ago, for example, he carved two Cour D’Alene Idaho Skookumchuk figures four feet high for a night club owner. The only model Robertson had to pattern his carvings from was an old-time miniature rubber Indian. On another occasion a noted Garden City, Idaho, club wanted Robertson to carve a life-size figure of Last Chance Joe, a famous Western character. “What’s he like?” asked Robertson. “There he is,” said the club owner, pointing to a huge sign in front of his club. Robertson mentally photographed the character and started working on a log. When it was completed, it was a commendable replica of the painting. It now reposes in the famous club.

Robertson doesn’t have many special items but he says he gets many requests for the old standbys like the redskin with hatchet in hand or the one with his hand shading his eyes.

Wooden Indians are durable. “In fact,” said Robertson, “a wooden Indian will outlast any live Indian if, in addition to three coats of bright paint, the final finished red man is liberally doused with linseed oil through a hole in the top of his head.”