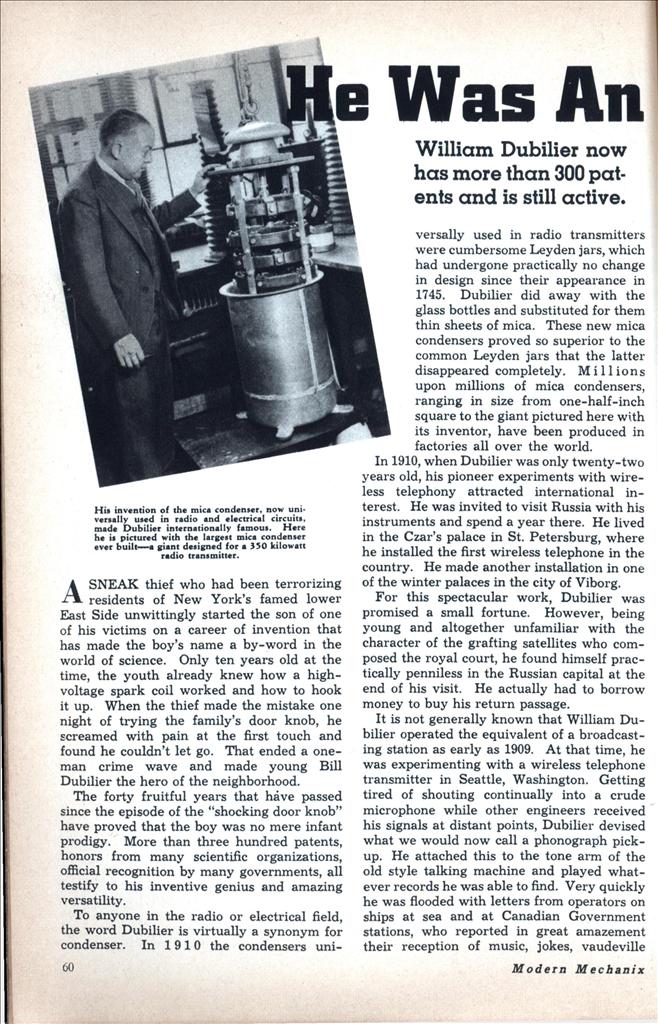 He Was An Inventor at Ten!

William Dubilier now has more than 300 patents and is still active.

A SNEAK thief who had been terrorizing residents of New York’s famed lower East Side unwittingly started the son of one of his victims on a career of invention that has made the boy’s name a by-word in the world of science. Only ten years old at the time, the youth already knew how a high-voltage spark coil worked and how to hook it up. When the thief made the mistake one night of trying the family’s door knob, he screamed with pain at the first touch and found he couldn’t let go. That ended a one-man crime wave and made young Bill Dubilier the hero of the neighborhood.

The forty fruitful years that have passed since the episode of the “shocking door knob” have proved that the boy was no mere infant prodigy. More than three hundred patents, honors from many scientific organizations, official recognition by many governments, all testify to his inventive genius and amazing versatility.

To anyone in the radio or electrical field, the word Dubilier is virtually a synonym for condenser. In 1910 the condensers uni- versally used in radio transmitters were cumbersome Leyden jars, which had undergone practically no change in design since their appearance in 1745. Dubilier did away with the glass bottles and substituted for them thin sheets of mica. These new mica condensers proved so superior to the common Leyden jars that the latter disappeared completely. Millions upon millions of mica condensers, ranging in size from one-half-inch square to the giant pictured here with its inventor, have been produced in factories all over the world.

In 1910, when Dubilier was only twenty-two years old, his pioneer experiments with wireless telephony attracted international interest. He was invited to visit Russia with his instruments and spend a year there. He lived in the Czar’s palace in St. Petersburg, where he installed the first wireless telephone in the country. He made another installation in one of the winter palaces in the city of Viborg.

For this spectacular work, Dubilier was promised a small fortune. However, being young and altogether unfamiliar with the character of the grafting satellites who composed the royal court, he found himself practically penniless in the Russian capital at the end of his visit. He actually had to borrow money to buy his return passage.

It is not generally known that William Dubilier operated the equivalent of a broadcasting station as early as 1909. At that time, he was experimenting with a wireless telephone transmitter in Seattle, Washington. Getting tired of shouting continually into a crude microphone while other engineers received his signals at distant points, Dubilier devised what we would now call a phonograph pickup. He attached this to the tone arm of the old style talking machine and played whatever records he was able to find. Very quickly he was flooded with letters from operators on ships at sea and at Canadian Government stations, who reported in great amazement their reception of music, jokes, vaudeville patter, songs, etc. This impromptu entertainment was greatly welcomed by the operators, who wore heavy, uncomfortable earphones for hours at a time.

The novelty of receiving music through the air appealed to the owner of an amusement park in Seattle. He fitted up a crude receiving set and erected a sign reading, “Listen To The Wireless For Ten Cents.” Strangely enough, every time that Dubilier visited the amusement park and attempted to listen in, he was told that the apparatus was out of order. The receiver was working, but there was no music to pick up, for the simple reason that Dubilier was not at the transmitter to operate it!

When the World War broke out a few years later, the young inventor had more opportunity than ever to exercise his abilities. He devised a means for locating submerged submarines and calculating their speed and direction, an idea that proved extremely valuable to France and Great Britain. Before the United States entered the War and before airplanes were even dreamed of as military weapons of any importance, Dubilier demonstrated to his own government the practicability of wireless communication between airplanes in flight and the ground.

Strangely enough, William Dubilier had originally planned to become a lawyer. However, when he learned that law degrees were comparatively easy to obtain and that lawyers were a drug or the market, he decided to follow his natural inclination to experiment with electrical circuits and gadgets. He was that unusual person—a good business man as well as a good inventor—and by the time he was fifteen, he had already established himself as a regular electrical contractor. He did his contracting work in the evening and attended school in the daytime to further his technical education.

The blossoming art of radio communication deeply intrigued him and he made many notable contributions to it. He travelled extensively and left his mark in many corners of the world. Today, apparatus bearing his name is manufactured in huge factories in the United States, Great Britain, France and Germany. Practically every important manufacturer of electrical equipment has taken out licenses on one or more of his many patents.

In spite of the growth of huge industrial organizations and plant laboratories manned by hundreds of scientists, Dubilier believes that the opportunities for the young, independent inventor are still unlimited.

“The modern laboratories of the big, industrial firms unquestionably have performed many miracles in the development of new ideas and processes,” he says, “but the cellar or attic tinkerer, in many cases, has just as good a chance of conceiving a new idea that may readily bring him a fortune overnight. I have never forgotten the crudeness of the apparatus I worked with as a boy, and how limited my facilities were for experimenting.”

Still an inveterate experimenter, Dubilier regularly spends several days a week in his well equipped laboratories in South Plainfield, New Jersey and devotes the rest of his time to his skyscraper office in New York, where the mere handling of his patent interests is a big business all itself.