Mechanix Illustrated
Issue: Jan, 1951
Posted in: Aviation
25 Comments on Helicopters for Everybody (Jan, 1951)

Helicopters for Everybody (Jan, 1951) 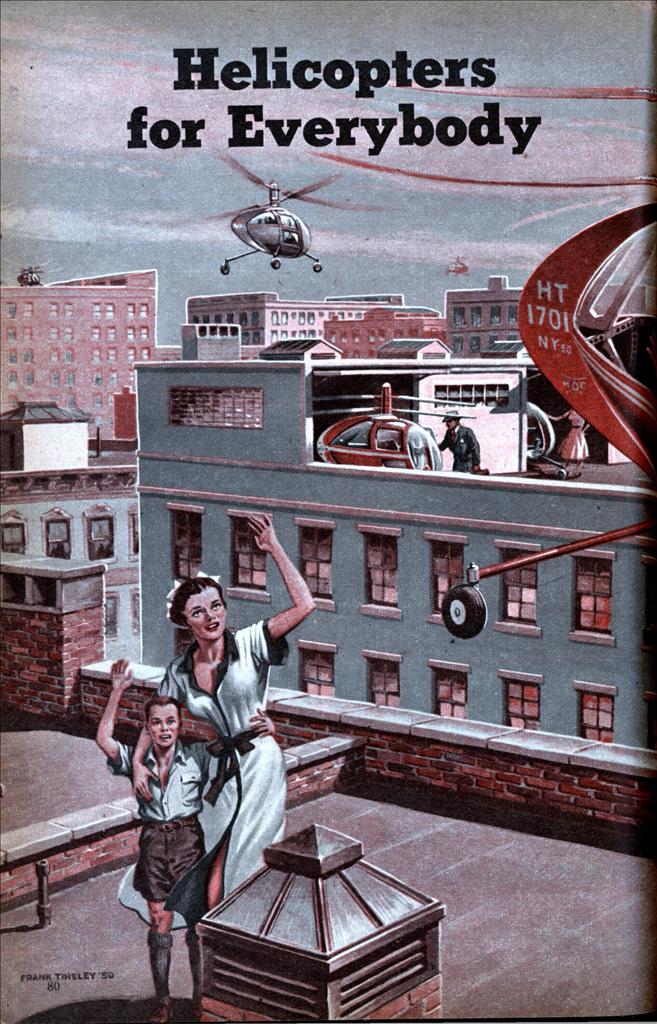 The Hoppicopter is evolving into a comfortably single-seat helicopter that will supply you with cheap air transportation.

BACK in the 30’s, a Seattle aeronautical engineer named Horace T. Pentecost became convinced that he could design a set of personal wings. As an engineer and student of aviation history, Pentecost was well aware of the shortcomings of man-made flapping wings, so he gave the problem an entirely different solution. In place of rosy pinions, he substituted the whirling blades of the modern helicopter. His first machine, designed for army paratroopers, was intended to supplant the clumsy and uncontrollable parachute. Strapped to the wearer’s back, it was christened “Hoppicopter” because the trooper literally hopped off and landed on his own two feet. It consisted of little more than an engine, rotors and control stick, mounted on a tubular frame that was strapped over the flier’s shoulders and back.

The Hoppicopter’s dependence upon human legs as landing gear proved its ultimate undoing. Landing on rough terrain, the wearers frequently stumbled and fell, smashing the whirling vanes against the ground. This was not only embarrassing but expensive.

The next model boasted a light tube-and-canvas seat and three landing wheels arranged in a triangle, supported on spindly, insect-like legs. In flight, the pilot felt somewhat more at ease, not as though he were hanging in space like a fish on the end of a line. The working parts were unchanged, however. A hot, noisy motor still nestled coyly against the back of the pilot’s neck. The gas tank was suspended directly above him with no fire protection.

The third model has corrected some of the above mentioned faults. The engine now is slung under the seat directly beneath the center of gravity. This warms the pilot in cold air and improves the machine’s balance. The model at present is being tested. There still remains, however, the sense of insecurity—of riding a flying swivel chair with no visible means of support. Pentecost and his associates are perfectly well aware of this natural reaction and have planned a weatherproof enclosure for the machine.

In the illustration one version of such a streamlined housing is shown. With this addition, our Hoppicopter becomes a vehicle of true utility. Such a machine would be practical, cheap to buy and maintain and could easily be the answer to the demand for a “Model T” helicopter.