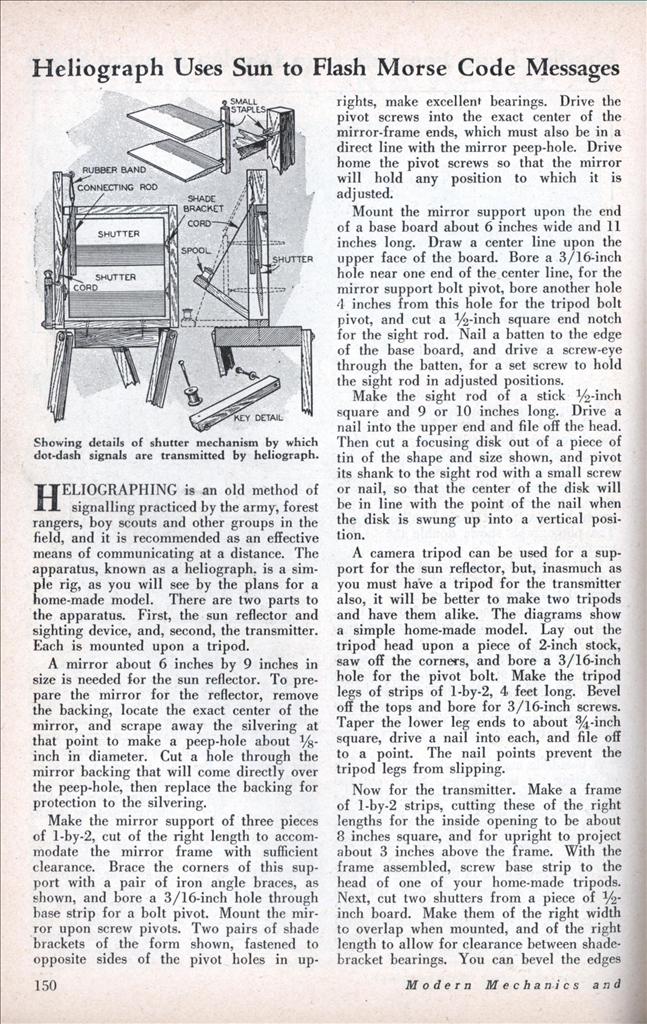 HELIOGRAPHING is an old method of signalling practiced by the army, forest rangers, boy scouts and other groups in the field, and it is recommended as an effective means of communicating at a distance. The apparatus, known as a heliograph, is a simple rig, as you will see by the plans for a home-made model. There are two parts to the apparatus. First, the sun reflector and sighting device, and, second, the transmitter. Each is mounted upon a tripod.

A mirror about 6 inches by 9 inches in size is needed for the sun reflector. To prepare the mirror for the reflector, remove the backing, locate the exact center of the mirror, and scrape away the silvering at that point to make a peep-hole about 1/8-inch in diameter. Cut a hole through the mirror backing that will come directly over the peep-hole, then replace the backing for protection to the silvering.

Make the mirror support of three pieces of l-by-2, cut of the right length to accommodate the mirror frame with sufficient clearance. Brace the corners of this support with a pair of iron angle braces, as shown, and bore a 3/16-inch hole through base strip for a bolt pivot. Mount the mirror upon screw pivots. Two pairs of shade brackets of the form shown, fastened to opposite sides of the pivot holes in up- rights, make excellent bearings. Drive the pivot screws into the exact center of the mirror-frame ends, which must also be in a direct line with the mirror peep-hole. Drive home the pivot screws so that the mirror will hold any position to which it is adjusted.

Mount the mirror support upon the end of a base board about 6 inches wide and 11 inches long. Draw a center line upon the upper face of the board. Bore a 3/16-inch hole near one end of the center line, for the mirror support bolt pivot, bore another hole 4 inches from this hole for the tripod bolt pivot, and cut a 1/2-inch square end notch for the sight rod. Nail a batten to the edge of the base board, and drive a screw-eye through the batten, for a set screw to hold the sight rod in adjusted positions.

Make the sight rod of a stick 1/-inch square and 9 or 10 inches long. Drive a nail into the upper end and file off the head. Then cut a focusing disk out of a piece of tin of the shape and size shown, and pivot its shank to the sight rod with a small screw or nail, so that the center of the disk will be in line with the point of the nail when the disk is swung up into a vertical position.

A camera tripod can be used for a support for the sun reflector, but, inasmuch as you must have a tripod for the transmitter also, it will be better to make two tripods and have them alike. The diagrams show a simple home-made model. Lay out the tripod head upon a piece of 2-inch stock, saw off the corners, and bore a 3/16-inch hole for the pivot bolt. Make the tripod legs of strips of l-by-2, 4 feet long. Bevel off the tops and bore for 3/16-inch screws. Taper the lower leg ends to about 3/4-inch square, drive a nail into each, and file off to a point. The nail points prevent the tripod legs from slipping.

Now for the transmitter. Make a frame of l-by-2 strips, cutting these of the right lengths for the inside opening to be about 8 inches square, and for upright to project about 3 inches above the frame. With the frame assembled, screw base strip to the head of one of your home-made tripods. Next, cut two shutters from a piece of 1/2″ inch board. Make them of the right width to overlap when mounted, and of the right length to allow for clearance between shade-bracket bearings. You can bevel the edges of the shutter boards or leave them of full thickness.

Make the shutter connecting rod of a strip 3/8-inch square and 5 inches long, and fasten it to one edge of each shutter by means of double-pointed tacks. Drive one tack into the edge of the shutter, interlock the tack with a second tack and drive this into the connecting rod.

To complete the mechanism for operating the shutters, drive a screw hook into the top of the connecting rod, and another hook into the upper end of upright. Slip several rubber bands over these hooks, using bands of a length that will hold the shutters closed. Tie a piece of cord to the shank of the connecting rod hook, and run this down to the transmitting key. Make the key arm of a strip 3/4-inch square and 7 inches long, drill one end for a screw pivot, and screw the strip to the outer face of frame upright. Screw a small thread spool to the free end of the key strip, and drive a screw-eye into the side edge for the attachment of the operating cord.

You will want to finish the heliograph apparatus to make it look like a real job. I suggest that you use lacquer rather than paint or enamel, because it dries more quickly, and is not likely to gum up parts.

To set up the heliograph for operation, stand the sun reflector tripod with mirror and sightrod in line with receiving station. Look through the peephole in the mirror, and adjust the sight rod until the peep-hole and the nail point line up with the receiving station. Then stand the transmitting tripod in front of the sun reflector. The next step is to catch the sun’s rays upon the mirror by turning the mirror. The mirror will then reflect a panel of sunlight, with a small spot in the center caused by the unsilvered peep-hole. This spot must be focused upon the focusing disk. First, raise the focusing disk, so that it centers upon the sight rod point. Then adjust the mirror until the peep-hole shadow is focused up an the disk.