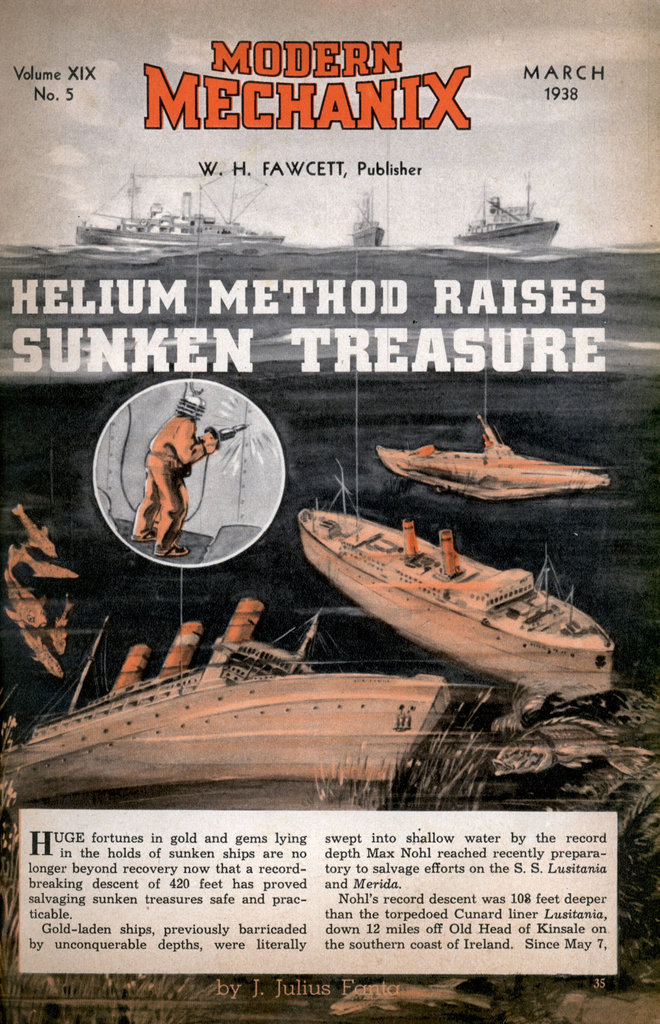 HUGE fortunes in gold and gems lying in the holds of sunken ships are no longer beyond recovery now that a record-breaking descent of 420 feet has proved salvaging sunken treasures safe and practicable.

Nohl’s record descent was 108 feet deeper than the torpedoed Cunard liner Lusitania, down 12 miles off Old Head of Kinsale on the southern coast of Ireland. Since May 7, 1915, the Lusitania’s strongroom has hoarded $5,000,000 in gold bullion, packed in wooden chests, and the purser’s safe holds another million dollars in money shipments and jewelry. It is 201 feet deeper than the ill-fated Merida, sunk in collision 70 miles off the Virginia Capes in 1912, with $2,000,000 in gold and the former crown jewels of Mexico in her vault. These ships are located and marked with buoys, ready for divers equipped with helium breathing units to raise their treasures.

They have remained untouched so long because of the divers’ helplessness in steel armored suits and their inability to leave diving bells designed to withstand overwhelming water pressure. Fear of contracting bends, diving’s greatest terror, was also a deterrent.

Nohl has perfected and successfully proven a new type of suit with self-contained helium and oxygen breathing unit, which unfailingly immunizes divers against paralysis, or bends. Supported by equal amounts of pressure inside and out, the suit can withstand pressure at unlimited depths.

The suit is flexible, made of thirty layers of paper-thin rubber, and enables the diver to operate undersea searchlights and blow torches for cutting through steel blukheads which bar the way to ships’ strong-rooms. It allows full use of the arms and legs. Access to ship’s interiors is not hampered by helmet-to-surface air hoses which imperil the diver when fouled. Air lines to the newly-perfected aluminum helmet run only to export valves of the steel tanks of helium and oxygen strapped to the diver’s back.

Totally immunized against bends by breathing helium, divers can put in a full day’s work cutting or blasting open steel doors without being effected by water pressure. Thus the recovery of sunken gold may be expedited. Otherwise, it was previously a problem how divers could stay with the Lusitania long enough to get some work done.

The new helmet is fitted with a telephone so that the user can direct the operations of other divers on the job. With a switchboard on the surface ship, divers on the bottom and surface crews can communicate with each other. When entering wreckage, however, divers can disconnect telephone cables and make them fast below, to avoid fouling or damaging them.

Incorporation of helium in diving has dispelled old theories that the human body can withstand limited submarine pressure. It proved that man has infinite ability to descend far deeper than previously without ill-effects.

The cause of bends has long been known, but means of prevention is entirely new. The “bends” is literally the poison from fangs of great ocean depths that have defeated divers’ attempts to reach coveted fortunes.

The blood can cope with normal amounts of nitrogen entering it from the lungs, but not excess quantities forced down by compressed natural air. Consequently, the excess forms gas bubbles in the bloodstream. These retard the circulation, even check it entirely, and total or partial paralysis is the result. Hence bends.

The type of breathing gear used by Nohl avoids use of natural air, thus preventing all nitrogen from entering the lungs. Breathed instead is helium, a life-giving gas, pleasant to breath and odorless. To meet physical requirements, it is mixed with oxygen by the diver as he uses it.

Under pressure, helium is not only highly efficient but it does not escape through the lungs into the blood appreciably. In diving, nitrogen dopes the mind and body, while helium exhilarates like a tonic.

The two high-pressure steel tanks of the breathing gear, one for helium and the other for oxygen, each hold 2,000 pounds of pressure, and 25 cubic feet. This is sufficient to sustain a diver 23 hours.

In descending, to resist the increasing water pressure, the diver fills his suit with corresponding amounts of air pressure, by means of valves at his side. The descent is made gradually so that the body adjusts itself to the pressure. In the test dive, Nohl reached bottom 420 feet down in nine minutes, by which time 180 pounds per square inch were valved into his suit. At the same time, the same pressure was breathed to prevent crushing of the lungs.

Between the two opposing pressures at great depths Nohl’s suit of 1/2″ rubber is compressed to 1/8 inch. Interesting is the fact that divers breathing helium can return from the Lusitania’s depth almost immediately without fatiguing periods of decompression. Because the body decompresses, or adjusts itself to changing pressures, much faster with helium, the decompression time for 312 feet is less than one hour.

This compares with U. S. Navy decompression time tables, which require six hours for 300 foot descents with natural air. While it has none for 400 feet or more, it would presumably be eight hours. Natural air took no diver deeper than 306 feet, a previous record set in 1915 by Frank Crilley, a navy diver, who hooked hoisting cables to the sunken submarine F-4 on the bottom of Pearl Harbor, Hawaii.

To pierce the eternal darkness of undersea depths, specially designed submarine searchlights, with multiple 5,000-watt bulbs of heavy glass, are being developed to aid Nohl in his salvage work. Also are new types of acetylene blow torches designed for underwater efficiency. The torches will be equipped with high-pressure oxygen blowers which will hold back the water while acetylene flames cut through steel.

Preparatory to salvaging the Lusitania, Nohl and his crew will start operations on the Merida in May. A ship equipped with sand-sucking machinery will be employed to clear the mud that washed into the wreck. Then the way to the safe will be clear. How the treasure is to be recovered and lifted will be determined on the job. By August, Nohl plans to be across the Atlantic working on the Lusitania.

Revolutionizing the field of diving, helium-equipped diving suits may succeed in salvaging other treasure-laden ships on which complicated methods have failed. In the Klondike gold ship, Islander, sunk off Admiralty Island, near Juneau, Alaska, since she collided with an iceberg in 1901, lies $3,000,000 in gold dust nuggets. Attempts to drag the Islander ashore by lifting her with 40 cables suspended from two ships, and float her with the tide, were partially successful. Two thousand feet from shore in 190 feet of water, the Islander broke in two. The forward half, containing the valuable cargo, was again lost.

Untold millions in gold and silver are yet to be recovered from the sunken fleet of Spanish galleons in Vigo Bay, off the Spanish main. In 1702 the fleet of 17 pirate ships were returning from a three-year loot on high seas. Homeward bound they encountered reprisal-seeking British warships and anticipating defeat, the pirates scuttled eight of their fleet with a similiar treasure of gold that was recovered from the remaining nine before they sank.

With helium equipment, salvage expeditions at last have a fighting chance to regain the gold glittering on the ocean floor.