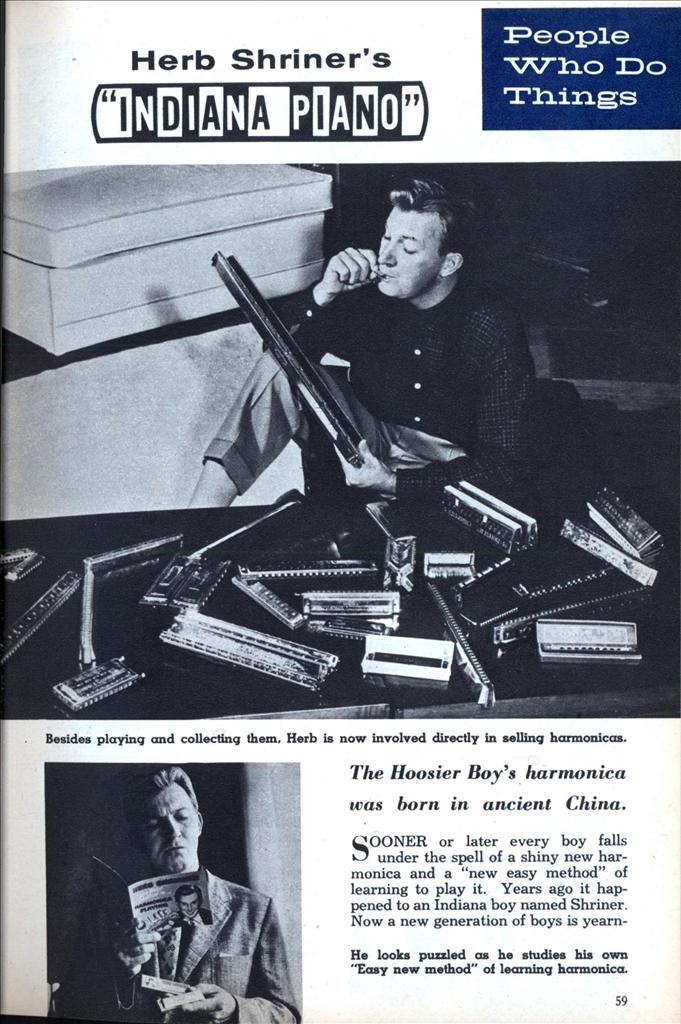 The Hoosier Boy’s harmonica was born in ancient China.

Herb’s special brand of humor derives a good deal from the mood his harmonica sets; he has never made a public appearance, on TV or elsewhere, without one. Associated with the caboose, the calaboose and the haybarn (where it is regarded highly as it will not start a fire), Herb’s trademark goes well with his carefully preserved rube routine. Actually the harmonica has a long, distinguished history going back to ancient China, like gunpowder and spaghetti.

The modern harmonica, more or less as Herb plays and collects it today, dates back to 1829. Its inventor was inspired by the harmonium, a keyboard free-reed instrument with a bellows. Using the free reed or vibrator in a portable instrument seemed like a good idea, so he put together a little box containing several vibrators, each in its own corridor. He called it the aeolina; it wasn’t until years later that farm boys tabbed it the harmonica or “mouth organ.” The inventor of the harmonica was named Charles Wheatstone; in the history books he is mentioned as Sir Charles, the inventor of the electric telegraph. The harmonium, from which he got his idea, was invented by a Dane named Kratzenstein, who got his idea from the ancient Chinese cheng — a sort of teapot with bamboo stuck in the top. You blew through the spout and agitated the free reeds in the bamboo. The harmonica is easier to play, especially with Herb Shriner’s new easy method.