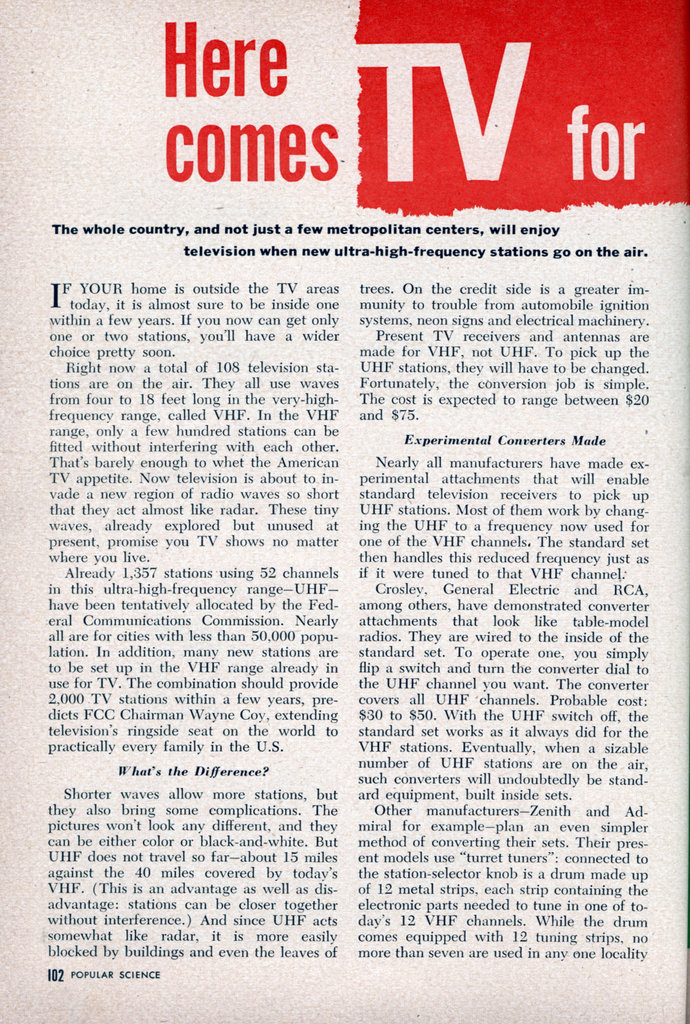 Here comes TV for everybody

The whole country, and not just a few metropolitan centers, will enjoy television when new ultra-high-frequency stations go on the air.

IF YOUR home is outside the TV areas today, it is almost sure to be inside one within a few years. If you now can get only one or two stations, you’ll have a wider choice pretty soon.

Right now a total of 108 television stations are on the air. They all use waves from four to 18 feet long in the very-high-frequency range, called VHF. In the VHF range, only a few hundred stations can be fitted without interfering with each other. That’s barely enough to whet the American TV appetite. Now television is about to invade a new region of radio waves so short that they act almost like radar. These tiny waves, already explored but unused at present, promise you TV shows no matter where you live.

Already 1,357 stations using 52 channels in this ultra-high-frequency range—UHF— have been tentatively allocated B the Federal Communications Commission. Nearly all are for cities with less than 50,000 population. In addition, many new stations are to be set up in the VHF range already in use for TV. The combination should provide 2,000 TV stations within a few years, predicts FCC Chairman Wayne Coy, extending television’s ringside seat on the world to practically every family in the U.S.

Shorter waves allow more stations, but they also bring some complications. The pictures wont look any different, and they can be either color or black-and-white. But UHF does not travel so far—about 15 miles against the 40 miles covered by today’s VHF. (This is an advantage as well as disadvantage: stations can be closer together without interference.) And since UHF acts somewhat like radar, it is more easily blocked by buildings and even the leaves of m trees. On the credit side is a greater immunity to trouble from automobile ignition systems, neon signs and electrical machinery. Present TV receivers and antennas are made for VHF, not UHF. To pick up the UHF stations, they will have to be changed. Fortunately, the conversion job is simple. The cost is expected to range between $20 and $75.

Experiment til Converters Made Nearly all manufacturers have made experimental attachments that will enable standard television receivers to pick up UHF stations. Most of them work by changing the UHF to a frequency now used for one of the VHF channels* The standard set then handles this reduced frequency just as if it were tuned to that VHF channel: Crosley, General Electric and RCA, among others, have demonstrated converter attachments that look like table-model radios. They are wired to the inside of the standard set. To operate one, you simply flip a switch and turn the converter dial to the UHF channel you want. The converter covers all UHF channels. Probable cost: $30 to $50. With the UHF switch off, the standard set works as it always did for the VHF stations. Eventually, when a sizable number of UHF stations are on the air, such converters will undoubtedly be standard equipment, built inside sets.

Other manufacturers—Zenith and Admiral for example—plan an even simpler method of converting their sets. Their present models use “turret tuners”: connected to the station-selector knob is a drum made up of 12 metal strips, each strip containing the electronic parts needed to tune in one of today’s 12 VHF channels. While the drum comes equipped with 12 timing strips, no more than seven are used in any one locality because no more than seven VHF channels are allocated to one area. That means the unused VHF strips can be replaced with strips that will tune in UHF channels.

The tuning-strip system has the advantage of low cost—a UHF strip should cost about $10. And it is simple—nothing shows outside the regular set, there are no extra switches or dials, and installation is a 10-minute job that requires no tools.

Antenna Change Simpler Yet Since UHF waves are so much shorter than VHF, you will need a special antenna to catch them. But it will be small and inexpensive. It would be mounted on top of the mast holding the VHF elements.

Several designs for antennas have already come from experiments with UHF (notably RCA’s in Bridgeport, Conn., PS, Aug. ’50, p. 111). They range from the tiny and cheap “bow tie,” which works best five or six miles from the transmitter, through the efficient “stacked vee” and highly directive, almost ghostproof “rhombic,” to the very sensitive “parabolic” and “corner reflector.”

Technically, UHF is here. But actually, only a few experimental stations are operating. The FCC’s allocations are tentative and will not be made final until public hearings are completed. So it is bound to be a year or so before the first commercial UHF telecasts begin, and several years before you can settle down in your own favorite chair in towns from Ajo, Ariz., to Millinocket, Me.—towns that never had television before—to watch the Rose Bowl game being played thousands of miles away.