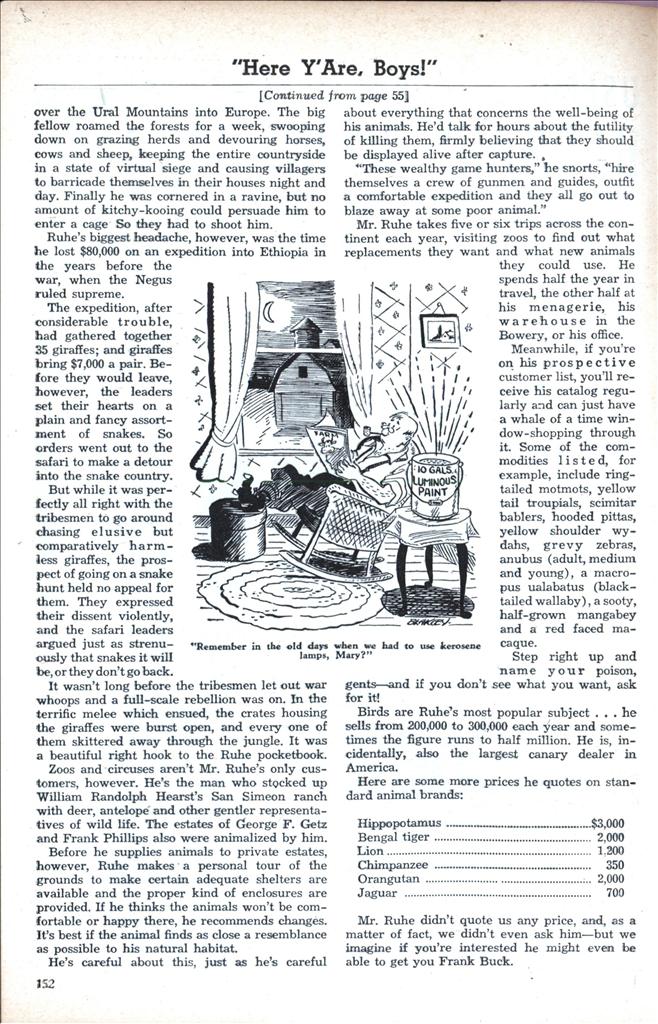 LET’S suppose that when you awoke this morning, you had a burning desire to own a reticulated giraffe. Or a greater or lesser hill mynah. Or maybe a black-headed sibia.

How would you go about acquiring one of these items?

Would you organize an expedition, and, with gun and camera, go trailing off into the jungles somewhere in search of your prize? Would you look up one of the Ringling boys, to see if he had any left-over spare parts? Or would you write to your congressman?

You wouldn’t have to do any of these things. Instead, you could jump on the phone and call up Heinz Ruhe, in New York City. Mr. Ruhe is the nation’s foremost animal importer, and reticulated giraffes, hill mynahs and black-headed sibias are his everyday stock-in-trade. In fact, if you’re lucky, you might just happen to catch Mr. Ruhe when one of the above staples was on his list of specials for the day.

Now, you would expect a man in Ruhe’s business to be a mahogany-tanned, two-gun swashbuckler, striding around in breeches and pith helmet, while a couple of lion cubs romp gaily at his heels. Mr. Ruhe is nothing of the sort. He is a pink-faced, mild mannered, slightly hefty guy in his middle thirties, and there isn’t a dog or a cat, or even a dried cannibal head, in his comfortable Long Island home.

He receives, boards and sells the rarest, the wildest, the biggest and the littlest denizens of the jungles, mountains and plains . . . yet he has never even caught a garter snake with a forked stick!

He organizes expeditions by remote control to the crags of Tibet and the wind-swept wastes of Siberia . . . yet he sits quietly in his New York office, calmly calculating profit and loss, depreciation and overhead.

Animals are strictly a business proposition for Mr. Ruhe. The most snarling of them are just so much livestock he can sell to a zoo, a circus, or to a bunch of the boys pulling a gag at a college reunion. He’d get you a Brontosaurus Rex, if he could find one, for cash, F.O.B., N.Y., crated.

Mr. Ruhe puts out a classy catalog listing his wares. A few years ago he used to print and distribute to all and sundry large circulars resembling grocery store throwaways, upon which he set forth his current prices. But the war has wrought changes in animal importing and he no longer dares publish prices for fear they would change overnight. He’ll quote them verbally, however, to anyone in the market for anything four-legged, two-legged or no-legged.

Currently, for example, he is taking $2,500 for an Indian baby elephant. Something fancier, like perhaps a full-grown gorilla, complete with bad temper and enormous appetite, will go for $4,000, plus a little extra for care and feeding.

If the shopper wants something expensive but very exclusive, Mr. Ruhe will track down an okapi for $15,000. The latter is a curious combination of giraffe and zebra which inhabits the Belgian Congo and, as a _ matter of fact, there is only one specimen in the country today. It’s at the Bronx Zoo in New York and was given to the city by special arrangement with the Belgian government. Mr. Ruhe had nothing to do with getting it, but he’s sure he can supply one to anybody with $15,000 to spend for it. Are you interested?

Mr. Ruhe also sells snakes. He either has them in stock or will shoot a wire to one of the 35 representatives he has scattered all over the world and they’ll arrive, wriggling and fangy, in due time. There is no set price on the crawlers, however . . . you buy by the foot.

For more than 30 years Mr. Ruhe’s family has operated a private menagerie at the edge of a cemetery in Queens County, within sight of the spires of Manhattan. Yet thousands pass by each day, never suspecting that within the three-acre enclosure is as lovely a collection of snarling public enemies as ever roamed through a nightmare. The farm bears the name of Louis Ruhe, who founded the business a century ago.

A high fence of heavy wire surrounds the zoo, where animal consignments from all over the world are assembled. With its barns, runways and aviaries for its furred and feathered lodgers, it is a distributing point, where the animals remain a couple of weeks before they are routed to permanent homes.

Right now Mr. Ruhe has a terrific problem of supply and demand. He’s being swamped with orders for livestock, but the war and the crimp it has put in the shipping business has left him far behind in calls. Africa and India have always been his happy hunting grounds, but he’s taking no chances of a valuable cargo coming in the way of a torpedo, so he has shifted to South America.

If the animal purchaser wants his specimen badly enough, and if Africa is the sole habitat, Mr. Ruhe obliges. But his ships have to travel around the cape of Good Hope instead of through the Suez Canal, which is virtually closed to commerce. Animals with weak sea legs get mighty wobbly by the time the journey is completed, but Mr. Ruhe rarely loses any.

He’s had a few vivid and some sad experiences, though, and some mighty big scares. There was the time a Siberian snow leopard, a full-grown, beautiful animal with the conscience of a dictator and the appetite of a cannibal, escaped from a crate while being taken via the Trans-Siberian Railway over the Ural Mountains into Europe. The big fellow roamed the forests for a week, swooping down on grazing herds and devouring horses, cows and sheep, keeping the entire countryside in a state of virtual siege and causing villagers to barricade themselves in their houses night and day. Finally he was cornered in a ravine, but no amount of kitchy-kooing could persuade him to enter a cage So they had to shoot him.

Ruhe’s biggest headache, however, was the time he lost $80,000 on an expedition into Ethiopia in the years before the war, when the Negus ruled supreme.

The expedition, after considerable trouble, had gathered together 35 giraffes; and giraffes bring $7,000 a pair. Before they would leave, however, the leaders set their hearts on a plain and fancy assortment of snakes. So orders went out to the safari to make a detour ( into the snake country.

But while it was perfectly all right with the tribesmen to go around chasing elusive but comparatively harmless giraffes, the prospect of going on a snake hunt held no appeal for them. They expressed their dissent violently, and the safari leaders argued just as strenuously that snakes it will be, or they don’t go back.

It wasn’t long before the tribesmen let out war whoops and a full-scale rebellion was on. In the terrific melee which ensued, the crates housing the giraffes were burst open, and every one of them skittered away through the jungle. It was a beautiful right hook to the Ruhe pocketbook.

Zoos and circuses aren’t Mr. Ruhe’s only customers, however. He’s the man who stocked up William Randolph Hearst’s San Simeon ranch with deer, antelope and other gentler representatives of wild life. The estates of George F. Getz and Frank Phillips also were animalized by him.

Before he supplies animals to private estates, however, Ruhe makes a personal tour of the grounds to make certain adequate shelters are available and the proper kind of enclosures are provided. If he thinks the animals won’t be comfortable or happy there, he recommends changes. It’s best if the animal finds as close a resemblance as possible to his natural habitat.

He’s careful about this, just as he’s careful about everything that concerns the well-being of his animals. He’d talk for hours about the futility of killing them, firmly believing that they should be displayed alive after capture. , “These wealthy game hunters,” he snorts, “hire themselves a crew of gunmen and guides, outfit a comfortable expedition and they all go out to blaze away at some poor animal.”

Mr. Ruhe takes five or six trips across the continent each year, visiting zoos to find out what replacements they want and what new animals they could use. He spends half the year in travel, the other half at his menagerie, his warehouse in the Bowery, or his office.

Meanwhile, if you’re on his prospective customer list, you’ll receive his catalog regularly and can just have a whale of a time window-shopping through it. Some of the commodities listed, for example, include ring-tailed motmots, yellow tail troupials, scimitar bablers, hooded pittas, yellow shoulder wydahs, grevy zebras, anubus (adult, medium and young), a macro-pus ualabatus (black-tailed wallaby), a sooty, half-grown mangabey and a red faced macaque.

Step right up and name your poison, gents—and if you don’t see what you want, ask for it!

Birds are Ruhe’s most popular subject … he sells from 200,000 to 300,000 each year and sometimes the figure runs to half million. He is, incidentally, also the largest canary dealer in America.

Mr. Ruhe didn’t quote us any price, and, as a matter of fact, we didn’t even ask him—but we imagine if you’re interested he might even be able to get you Frank Buck.