Popular Science
Issue: Jul, 1947
Posted in: How to, Music
Tags: how its made
No Comments on Here’s How Harmonicas Are Made (Jul, 1947) 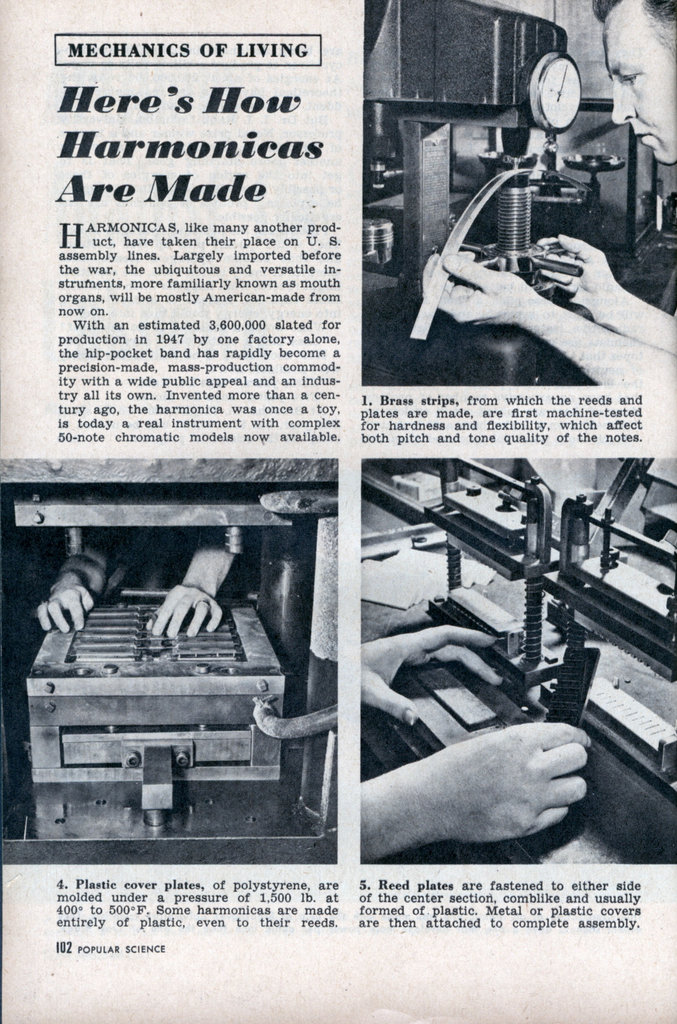 Here’s How Harmonicas Are Made

HARMONICAS, like many another product, have taken their place on U.S. assembly lines. Largely imported before the war, the ubiquitous and versatile instruments, more familiarly known as mouth organs, will be mostly American-made from now on.

With an estimated 3,600,000 slated for production in 1947 by one factory alone, the hip-pocket band has rapidly become a precision-made, mass-production commodity with a wide public appeal and an industry all its own. Invented more than a century ago, the harmonica was once a toy, is today a real instrument with complex 50-note chromatic models now available.

1. Brass strips, from which the reeds and plates are made, are first machine-tested for hardness and flexibility, which affect both pitch and tone quality of the notes.

2. Milling machine turns reeds out of brass strips, giving each the exact shape and thickness required for its particular note. The reeds are then riveted to the plates.

3. A beam of light, shining through the reeds, is used to check their alignment after riveting. Tolerances must be held to a fraction the thickness of human hair.

4. Plastic cover plates, of polystyrene, are molded under a pressure of 1,500 lb. at 400Â° to 500Â°F. Some harmonicas are made entirely of plastic, even to their reeds.

5. Reed plates are fastened to either side of the center section, comblike and usually formed of plastic. Metal or plastic covers are then attached to complete assembly.

6. Finished harmonicas move rapidly along a conveyor belt, assembly-line style, where they are individually boxed for shipment after first receiving a careful inspection.

7. Once a plaything, the harmonica is now making appearances at Carnegie Hall. Experts like John Sebastian (above) can play boogie-woogie or symphony with equal ease.