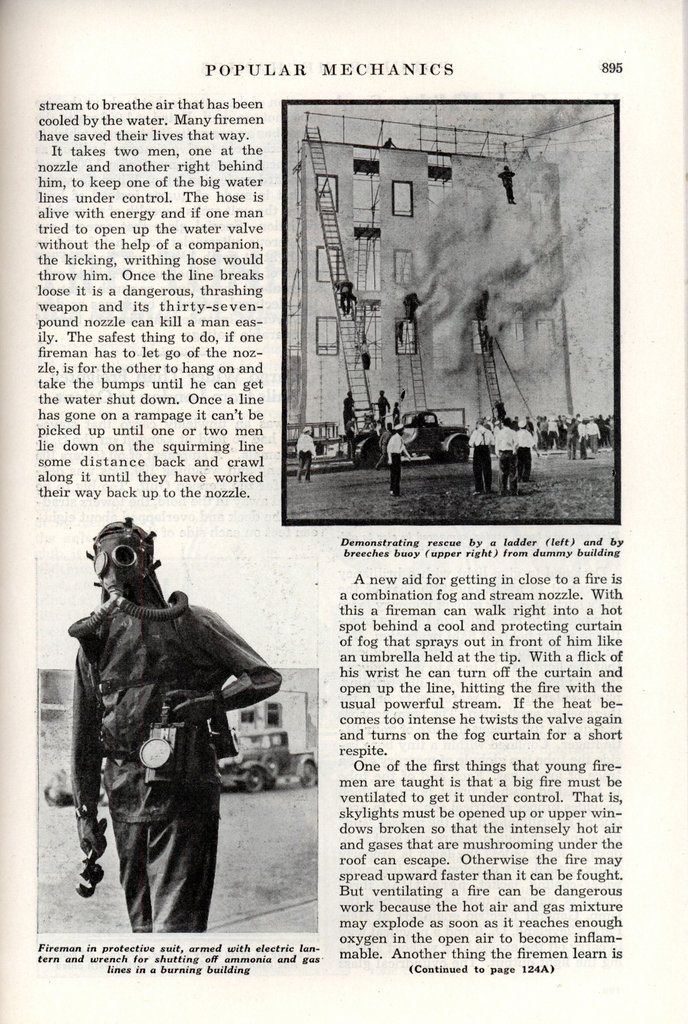 HEROES of the Fire Lines

PUTTING out fires is only a secondary job of the fire department. Saving lives comes first.

Men in every engine company are detailed to search the rooms of a burning building as soon as they respond to the alarm. A forgotten invalid in a bedroom or people trapped on an upper story may shift the generalship of fighting the fire.

In the downtown section of Los Angeles specially trained rescue squads answer each alarm with the other fire fighters. The squads have their own ambulances and rescue trucks loaded with lifesaving gear and gas masks. If every one is safely out of a building they turn to with the other firemen, dragging in water lines or running upstairs to get the ventilators open.

But when there is rescue work to be done they leave the fire fighting to the others.

Occasionally they get caught themselves and have to be rescued. Lowering incapacitated people from an upper story with the aid of a safety bag and a long rope may take so long that their exit is cut off and they have to jump. Part of their training includes the proper way to fall into a safety net that is held up by other firemen on the street.

At some fires the rescue men take over the toughest assignments in getting close to the flames while their mates stand in the street trying to protect them with cooling streams of water. Strong ammonia fumes are frequently an accompanying hazard to fires in the business areas of large cities because quantities of ammonia are piped to many buildings and are used in refrigerating plants. When such a line breaks, unprotected firemen are often helpless because they can’t see or breathe in the fumes, and the gas can cause serious burns to moist parts of the body.

When an ammonia line broke in a big ice-cream plant that was in flames the firemen were driven out to the sidewalks by the fumes. About all they could do was wet down adjoining buildings to keep the fire from spreading. But the rescue squad got the fire out in fifteen minutes. Two of the men dressed in what amounted to dryland deep-sea diving suits, outfits that completely covered them and inside of which they could live for two hours without replenishing the self-contained oxygen tanks. With this protection they took a water line right into the building and got the fire out.

The rubberized canvas suit completely covers the fireman. The breathing apparatus, which straps on his back, weighs thirty-eight pounds.

A gauge at his right shoulder tells him the pressure of the oxygen remaining in the tank so that he can escape to safety in time. Small reservoirs below the goggles of his mask contain distilled water and when the goggles fog up from his breathing he can clear the panes by shaking his head, washing the goggles off with the water.

With this outfit a fireman has complete protection against ammonia fumes and poisonous gases. He can enter gas-filled tanks, descend into the holds of ships filled with poisonous fumes, and even dive and remain under water.

Modern fire-fighting technique is to get in close to the flames before turning on the water. That way a few gallons of water may be more effective than thousands of gallons poured into a building from a distance. Fighting the flames at close quarters is sometimes pretty dangerous. Visibility may be only a few feet or a few inches inside a burning building. Firemen, blinded by the thick smoke, have walked into open elevator shafts and have fallen down where staircases have burned away. If necessary, firemen stay at their posts until the floor gets soft under their feet or they can tell that a wall or ceiling is ready to collapse. Falling timbers and flying glass account for most injuries. Panes of thick skylight glass, broken loose by the heat in spite of their chicken-wire netting, have struck firemen on lower floors and injured them severely.

A big two-and-a-half inch fire hose can be a fireman’s best friend inside a burning building but he must never let the hose get away from him. With plenty of water at his finger tips he can wet down the floor as he goes in, both to keep the flames from burning the hose up behind him and to keep open a path along which he can escape. In close quarters the fumes and hot gases from the fire are suffocating and in an emergency he and his mates can place their faces down close to the water stream to breathe air that has been cooled by the water. Many firemen have saved their lives that way.

It takes two men, one at the nozzle and another right behind him, to keep one of the big water lines under control. The hose is alive with energy and if one man tried to open up the water valve without the help of a companion, the kicking, writhing hose would throw him. Once the line breaks loose it is a dangerous, thrashing weapon and its thirty-seven-pound nozzle can kill a man easily. The safest thing to do, if one fireman has to let go of the nozzle, is for the other to hang on and take the bumps until he can get the water shut down. Once a line has gone on a rampage it can’t be picked up until one or two men lie down on the squirming line some distance back and crawl along it until they have worked their way back up to the nozzle.

A new aid for getting in close to a fire is a combination fog and stream nozzle. With this a fireman can walk right into a hot spot behind a cool and protecting curtain of fog that sprays out in front of him like an umbrella held at the tip. With a flick of his wrist he can turn off the curtain and open up the line, hitting the fire with the usual powerful stream. If the heat becomes too intense he twists the valve again and turns on the fog curtain for a short respite.

One of the first things that young firemen are taught is that a big fire must be ventilated to get it under control. That is, skylights must be opened up or upper windows broken so that the intensely hot air and gases that are mushrooming under the roof can escape. Otherwise the fire may spread upward faster than it can be fought. But ventilating a fire can be dangerous work because the hot air and gas mixture may explode as soon as it reaches enough oxygen in the open air to become inflammable. Another thing the firemen learn is never to stand in front of a door while preparing to open it in a burning house. There may be enough hot air under pressure on the other side to slam the door against them and knock them over if they are in the way. Standing alongside the door and reaching over to the knob is the safe way to do it.

Gasoline fires are dangerous even after they have been put out because severe flashbacks sometimes occur. The best thing to do, after a gasoline fire has been extinguished with carbon-dioxide gas, is to keep pouring on more gas from the extinguisher. Otherwise the thin inert gas blanket may dissipate before the material has cooled down to a safe temperature and a flashback will occur.

Besides the ammonia safety suits and breathing gear that the rescue trucks carry, firemen and rescue squad members are supplied with ordinary gas masks that protect against carbon-monoxide, smoke, phosgene gas, and most of the gases and fumes that are encountered in industrial fires. A different type of portable breathing apparatus is also carried on the truck, consisting of a big oxygen tank and other gear that may be electrically or manually operated, attached to several 100-foot lengths of oilproof air lines that fire fighters equipped with small breathing masks may trail behind them as they enter gas-filled enclosures. One of the rescue companies in Los Angeles has a complete asbestos suit for use when valves have to be shut down in an oil fire. The rescue trucks carry complete sets of first-aid supplies, acetylene torches, life belts and safety belts for lowering people down to safety, and grappling and drag hooks for recovering bodies lost in lakes and reservoirs. Resuscitation aids and suction apparatus for bringing life back to people who have been overcome by water or smoke are part of the rescue squad’s equipment, as is an “iron lung” respirator for infants and an oxygen tent used for emergency heart attack and pneumonia cases.

Aside from their work at the scenes of fires the rescue squads answer all sorts of other emergency calls and when an alarm rings for a rescue company the members never know whether they are to answer a fire alarm, be called in to save the life of a new-born baby, or be dispatched to the scene of a cave-in where someone has been buried under tons of dirt.