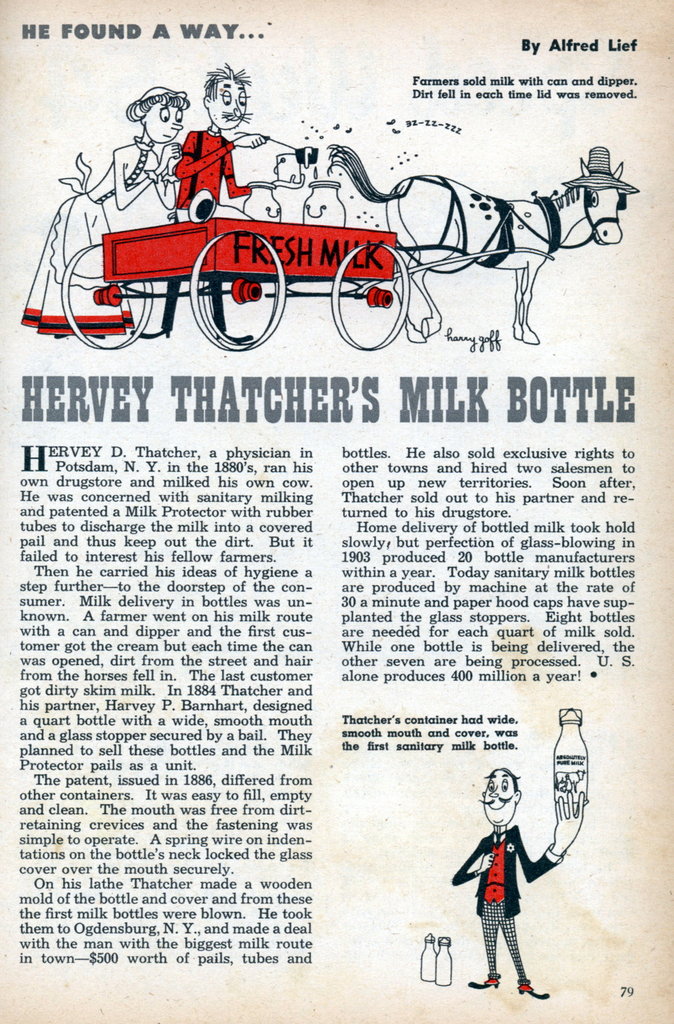 HERVEY D. Thatcher, a physician in Potsdam, N. Y. in the 1880’s, ran his own drugstore and milked his own cow. He was concerned with sanitary milking and patented a Milk Protector with rubber tubes to discharge the milk into a covered pail and thus keep out the dirt. But it failed to interest his fellow farmers.

Then he carried his ideas of hygiene a step furtherâ€”to the doorstep of the consumer. Milk delivery in bottles was unknown. A farmer went on his milk route with a can and dipper and the first customer got the cream but each time the can was opened, dirt from the street and hair from the horses fell in. The last customer got dirty skim milk. In 1884 Thatcher and his partner, Harvey P. Barnhart, designed a quart bottle with a wide, smooth mouth and a glass stopper secured by a bail. They planned to sell these bottles and the Milk Protector pails as a unit.

The patent, issued in 1886, differed from other containers. It was easy to fill, empty and clean. The mouth was free from dirt-retaining crevices and the fastening was simple to operate. A spring wire on indentations on the bottle’s neck locked the glass cover over the mouth securely.

On his lathe Thatcher made a wooden mold of the bottle and cover and from these the first milk bottles were blown. He took them to Ogdensburg, N. Y., and made a deal with the man with the biggest milk route in townâ€”$500 worth of pails, tubes and bottles. He also sold exclusive rights to other towns and hired two salesmen to open up new territories. Soon after, Thatcher sold out to his partner and returned to his drugstore.

Home delivery of bottled milk took hold slowly but perfection of glass-blowing in 1903 produced 20 bottle manufacturers within a year. Today sanitary milk bottles are produced by machine at the rate of 30 a minute and paper hood caps have supplanted the glass stoppers. Eight bottles are needed for each quart of milk sold. While one bottle is being delivered, the other seven are being processed. U. S. alone produces 400 million a year!