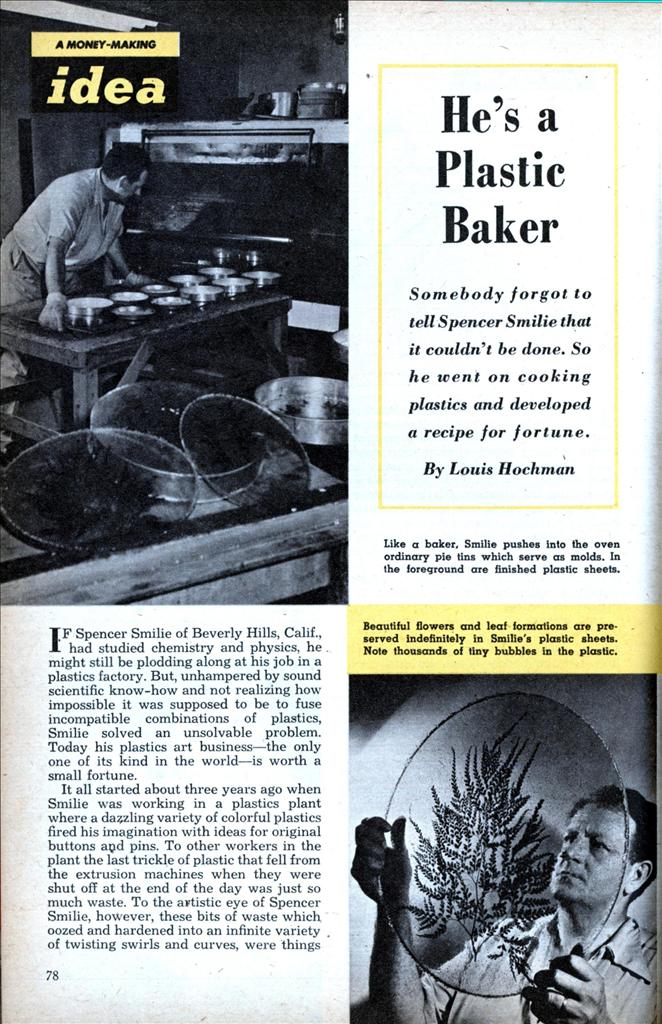 Somebody forgot to tell Spencer Smilie that it couldn’t be done. So he went on cooking plastics and developed a recipe for fortune.

IF Spencer Smilie of Beverly Hills, Calif., had studied chemistry and physics, he . might still be plodding along at his job in a plastics factory. But, unhampered by sound scientific know-how and not realizing how impossible it was supposed to be to fuse incompatible combinations of plastics, Smilie solved an unsolvable problem. Today his plastics art business—the only one of its kind in the world—is worth a small fortune.

It all started about three years ago when Smilie was working in a plastics plant where a dazzling variety of colorful plastics fired his imagination with ideas for original buttons and pins. To other workers in the plant the last trickle of plastic that fell from the extrusion machines when they were shut off at the end of the day was just so much waste. To the artistic eye of Spencer Smilie, however, these bits of waste which oozed and hardened into an infinite variety of twisting swirls and curves, were things of beauty and unusual modern design.

One night he took one of these drippings home, trimmed off some rough edges and stray ends, cemented a pin to its back and presented it to his wife as a brooch. Before he knew it he found himself in a small sideline business, selling these remodeled waste products to others.

Soon, Smilie’s daily practice of taking home a suitcase full of waste drippings aroused his boss’ curiosity but Smilie refused to divulge his newly-found use for the discarded plastic. The boss then tried to charge him for the waste whereupon Smilie quit.

By this time he was deep in experiments, mixing various combinations of plastics and baking them in the family oven. But it was eight months before he had anything worth keeping. By that time the oven itself wasn’t worth keeping.

As molds he used small tin-can covers and flat cups made from thin slices of brass and copper pipe and embedded all sorts of flora, fauna, insect life and odd objects in his new plastic. These he made into unique and distinctive buttons, pins and earrings and wholesaled them at from 25c to $1.25 each.

In a short time, Hollywood dress designers and manufacturers were swamping the Smilies with orders. From people all over the country came requests for buttons with such bits of personal treasure encased in them as a lock of hair, a tiny bloom from a home garden, a lucky coin or even a gold-filled tooth from the mouth of a dear-departed husband.

But “Smilite,” as Smilie dubbed his new plastic, was too good to be confined to tiny buttons and pins and soon he gave up the button business in favor of larger and more decorative items. His big break finally came in the form of an order from a Hollywood restaurant for a plastic mural measuring 18 feet wide by QV2 feet high. Could he produce it?

Smilie was sure he could, but not in his family oven. Scraping together all their assets and capital, the Smilies moved to Los Angeles, leased an entire building with overhead living quarters, bought a huge electric bakery oven, built some large 3-by-6V2-foot sheet metal molds and went to work. They had just enough raw plastic to do the job and could get no more with which to experiment. It had to be right the first time—or else. Of course, it turned out to be right.

Since then, Smilie has been turning out plastic murals and decorative items for which he is paid fabulous prices. The adaptability of his secret plastic lends itself to all forms of artistic expression. Unlike laminated plastic wherein a fabric or flat object is sealed under pressure and heat between two sheets of smooth clear plastic, Smilite is molded from the raw crystaline or powdered state, being heated and melted around objects in an open pan-type mold. The result is a plastic sheet with a soft, wavy surface filled with thousands of tiny bubbles containing the design or objects encased in it. Another advantage over the laminated plastic is the fact that after coming out of the oven, Smilite can be reheated and shaped into any desired form. With laminated plastic, the fabric or materials sealed within would tend to break or tear if the plastic were reheated and bent.

When Smilie is not making plastic murals, he’s busy turning out gift items such as salad and fruit bowls, serving trays, plates, lamp shades, screens, light shields, coffee tables with Smilite tops and Smilite masterpieces for furniture panels. His bowls retail for from $3 to $165. A 12-inch plate retails for $7.50. Screens sell for as high as $750 and for murals the sky’s the limit, depending on the size and work involved. Smilie has received as much as $2,500 for a single job.

On a typical day off, the Smilies can usually be found roaming the countryside collecting specimens of geological beauty or chasing some rare butterfly through the fields. Smilie insists that as long as nature sticks to its policy of never duplicating itself, he’ll never turn out two identical pieces of plastic art.