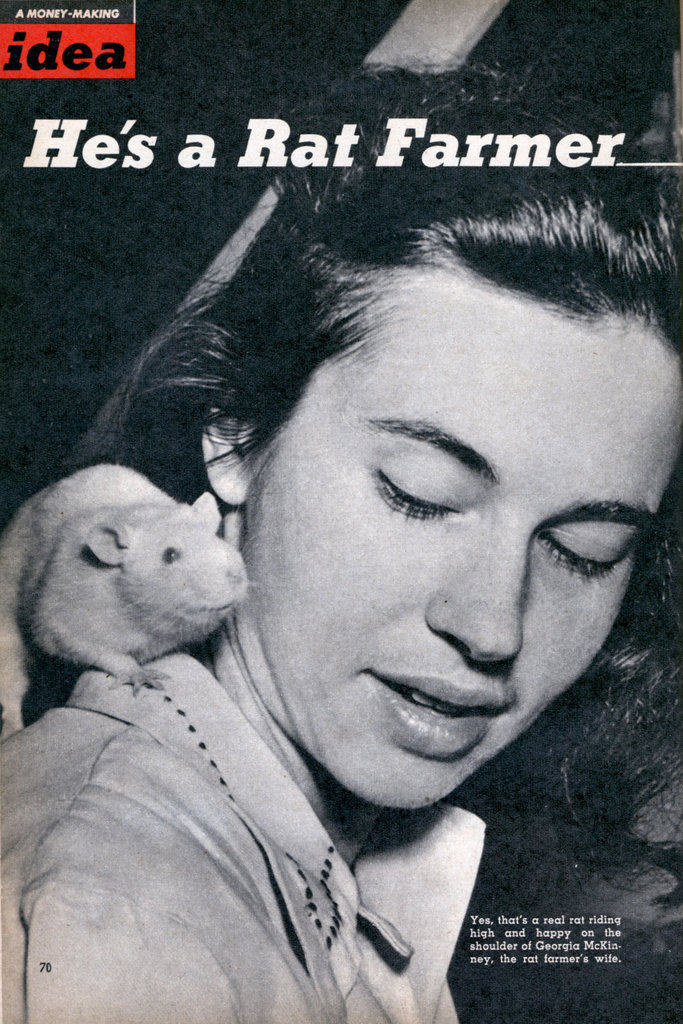 A strange little livestock ranch in the attic gave Norton McKinney a new life and a $10,000 crop.

“FUNNY kind of a business for a fellow to get into,” the villagers shake their heads as they glance up at the old mansion Norton McKinney bought in quiet little Middletown Springs, Vermont.

And it is a funny setup, all right. The attic in his antiquated home swarms with ratsâ€”mice, too. Last time he took a census there were 1500 adult rats and mice, with new litters running up the rodent population practically every day. You’d think his wife Georgia would raise the roof about that ratty situation up in the atticâ€”but, no, she only wants to hear more rats racing around over their heads. She even helps him nurse and coddle new-born rats with germ-free water and purify the air they breathe with ultra-violet lamps. No wonder their place is called Funny Farms!

For McKinney and his wife are running a new kind of livestock farmâ€”and . raising a fine flock of rats. Last year they harvested a $10,000 “crop” from their rat farm and they’re expanding all the time. To meet the specialized medical demand for thoroughbred rats and mice, they are shipping more than 500 a week to leading laboratories. Soon they expect to make that figure a round thousand.

Science needs these testing animals to fight cancer, to test for pregnancy and venereal disease; to study dietary diseases like rickets, and to mobilize our health forces against germ warfare and atomic radiation. Some of his rats “stood in” for humans at the Bikini atom-bomb tests. Mice were used in developing the latest hope in the war on cancerâ€”teropterin, which reduced the suffering and prolonged the life of the late Babe Ruth.

McKinney was a professional singer but three years as chief inspector in a Long Island City war plant proved too much for his nerves and left him at 34 too jittery to continue his job or to return to a singing career.

“What else can you do?” his doctor asked as he was convalescing during the spring of 1945.

Searching his mind, he thought of his hobby and said, “Raise white mice.”

Anybody else might have snickered. Dr. Edwin Zabrisky didn’t. He knew of the soaring laboratory demand for fast-breeding rats and mice, because their cells resemble man’s and because they make ideal stand-ins for controlled experiments. Picking up the phone, he called Dr. Charles Slanetz, head of the Laboratory Animals Department over at Columbia University and director of a project for supplying Army and Navy researchers with testing stock. Dr. Slanetz asked McKinney to stop in.

From Dr. Slanetz, he learned that raising lab animals would be harder than just fooling around with white mice as a hobby. The test stock must be uniform and free of disease, or experiments wouldn’t mean a thing. The scientist recommended Sherman white rats and Swiss-Albino white mice, all highly inbred stock.

At Middletown, it all looked easy at first when the litters began appearing. McKinney had $100 worth of stock in his wife’s unusual train “luggage”â€”40 rats and 150 mice. He was confident he’d get a government contract and start selling soon.

The pregnancy period of a mother rat or mouse was only 21 days. There were about 10 to a litter. He’d sell some and keep the rest to build up his breeding stock. The young would be ready to breed 12 weeks after birth. It took the young only 21 days to be weaned and ready to sell, at $1.25 for a rat and 30 cents for a mouse.

He had 400 rats and miceâ€”counting the new littersâ€”when, one day that first December, a mysterious disease struck his little livestock. He thought it was just “snuffles”â€”a common cold that affects rats and mice and isn’t serious. Then the young started having convulsions. To add to his worries about this strange affliction, the mothers developed a pink ruff around the neck. That, he had heard, indicated lack of proteins in the food.

Nothing helped. The little fellows began dropping over dead. Then, in desperation, he tried a chicken feed recommended by a friend. It worked almost over night, like a miracle. The weak survivors got back on their feet. The boils and convulsions disappeared. The white hair became glossy again. Of the 400 rodents he had before that protein plague hit the attic, he had only 30 left.

After he licked that mysterious death, he determined to raise the healthiest rats possible. He began suspending the breeding cages from the ceiling, so they wouldn’t get any contamination from the floor. He set up germicidal lamps to keep down odors and purify the air. On each cage hangs a water bottle with a glass tube through which the rodents suck chlorinated water.

For bedding, he uses only fresh, kiln-dried shavings from a nearby sawmill. He refuses any that’s been lying around. There’s too much chance of mold or infection by “wild” rats and mice, which are carriers of the dread disease, paratyphoid. This is similar to typhoid fever in humans and ruins the animals for experiments. Paratyphoid, for instance, changes the percentage of calcium in their blood and makes them useless for research on rickets.

The Funny Farms business is based on keeping breeding stock at high virility. Males are used only six months, and females are kept a year, during which they raise three litters.

Many little things contribute to McKinney’s success in raising rats. He cleans the cages twice a week. Once a month he disinfects them with a mixture of carbolic acid, green soap and creosote. A fan keeps sucking purified air through the attic. He sees that this nice, clean air is always kept at 70 to 80 degrees, which he found to be the healthiest temperature for his little livestock.

Funny Farms now seems a little less strange to the neighboring villagers, though they’re still surprised that he can make good money out of rats. One oldtimer put it this way:

“Dawg-gone it! I kill rats and here comes McKinney who raises ’emâ€”makes money at it, too!”

His rats are overflowing the attic, and they’re busy getting some of the second-floor rooms ready for more.

Rats, of course, have an unlovely reputation. But McKinney loves the friendly little animals and he’s proud to raise them and call himself a rat farmer. They helped him escape a real ratrace in the big city. Not only are they giving him more money than he ever made before but he’s living a fine life of peace and quiet. Anybody who’s scrambled for a living in New York will know what he means.