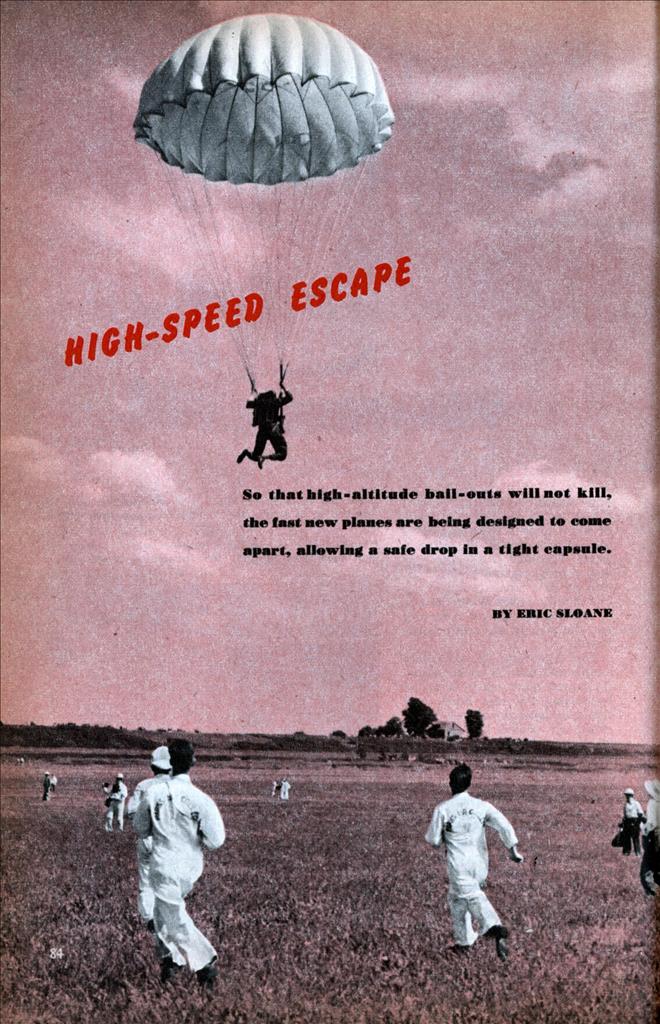 So that high-altitude ball-outs will not kill, the fast new planes are being designed to cone apart, allowing a safe drop in a tight capsule.

4 T 60,000 feet the flyer’s plane becomes his cell of life, its equipment almost as important as his own body. Outside the plane the cold of space is of instant-freeze intensity, much colder than any thickness of clothing could protect from. It is so thin that an exposed human’s body would cease to function. Blood would boil there at body temperature. Death from oxygen lack would occur quickly. Accordingly, the high-altitude plane has a cabin pumped with high-pressure air. Heated clothing is plugged into the plane’s power line. The flyer’s lungs are con- nected directly to the ship’s oxygen supply by means of a mask. To abandon such a design for living at 60,000 feet would be like leaving behind the most important organs of the body. Yet if things go Wrong with the high-altitude supersonic ships now being designed, it may be necessary to abandon ship at stratospheric heights. What then to do?

Even at 45,000 feet (today’s flight ceiling) a flyer cannot safely parachute from his ship. No flyer in his right mind would bail out from great heights when he can ride his ship to safer levels first. It would take a parachuter about a half hour to float to earth from 50,000 feet, time enough to make the trip fatal. The trick is to fall free—about a three-minute trip—through the deadly thin air, then open the ‘chute at about 10,000 feet. Of course you would have to carry a portable oxygen bottle for even that short fall through the dangerous area. It is interesting to note how the body falls slower as it approaches the denser air near the earth. Although you would fall at 275 mph from 50,000 feet, you would strike the ground at only 109 mph. These speeds are maximum velocities for the man of average weight. In the chart, the darkened portion is that area to be dropped through at the greatest speed—where cold and thin air mean death within a very short time.

Another stratospheric parachute difficulty is the yet unexplained shock experienced at the ‘chute’s opening. One would think that the greater speed would be counteracted by the thin air, but no. The shock of opening a ‘chute at high altitude often reaches 40 G’s! Even at low altitudes, if you opened your ‘chute at 400 mph you would add 6,000 pounds to your weight; not only would your body break, the ‘chute would, too. Only a closed cell or “capsule” could protect the flyer when abandoning ship either at supersonic speeds or at great heights. A ribbon-type chute would then be reefed out until the capsule has slowed down to normal falling speed, then allowed to blossom to full size.

The drawings show three ways that the designers are considering to release a pilot’s capsule into the stratosphere. The cabin cell could be released from either nose or tail position to parachute downward; then at lower altitudes the flyer could easily leave the capsule and use his own ‘chute. Or, explosive rivets may be used to disattach the cell from the rest of the plane. Inasmuch as the cabin of the stratospheric ship must necessarily become an air-tight cell, the separate and detachable capsule becomes an easy job for the designer to plan. At present there are many thousand-mile-an-hour rockets on the designer’s boards, and each design includes such a capsule. A new kind of aeronautical engineer has been born—the pressurized capsule expert. The world looks to his genius to send the first human into the space between the planets. •