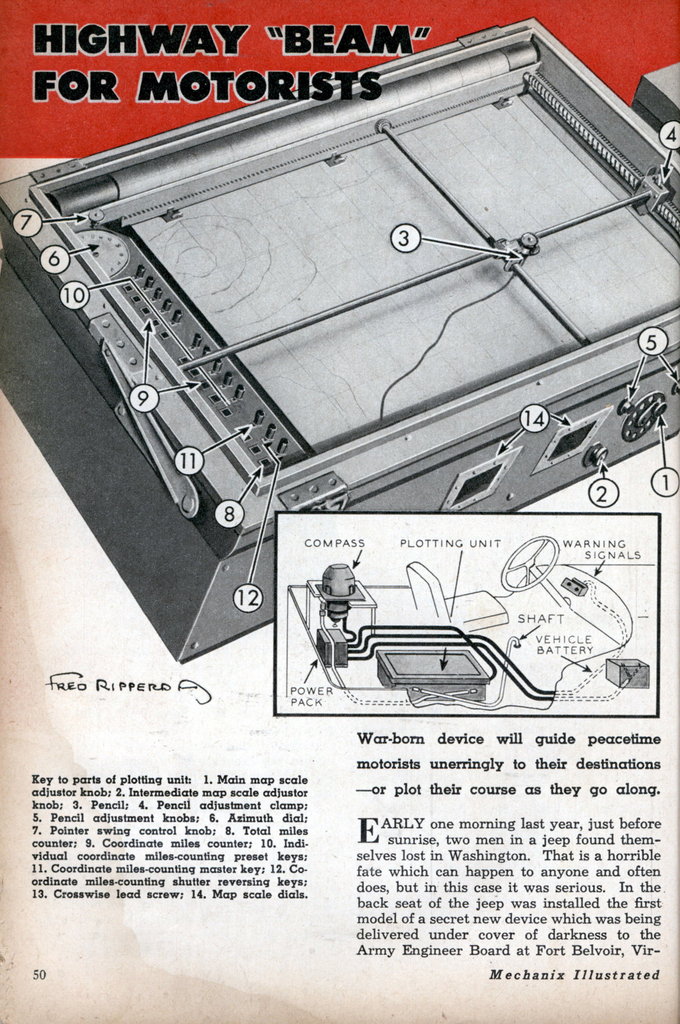 War-born device will guide peacetime motorists unerringly to their destinations â€”or plot their course as they go along.

EARLY one morning last year, just before sunrise, two men in a jeep found themselves lost in Washington. That is a horrible fate which can happen to anyone and often does, but in this case it was serious. In the back seat of the jeep was installed the first model of a secret new device which was being delivered under cover of darkness to the Army Engineer Board at Fort Belvoir, Virginia. It had to be there at 8:00 a. m. to be inspected by a full board of high Army officers. But the two men in the jeep, newcomers to Washington, were stymied.

At last they came upon a gas station that was open and pulled in to get directions. The attendant gave them the information they wanted and a road mapâ€”and the road map gave them a bright idea. Turning to the device in the back seat, they made some calculations, slipped the road map into the device, and drove without hesitation straight to Fort Belvoir.

The wonder machine which made that possible was the Odograph, an instrument which automatically plots the course of a moving vehicle or guides it to a given point. It’s the first successful device for instantaneous map-making in the field, and therefore a major contribution to the winning of the war. It draws a map that all can understand while the vehicle is in motion.

The Odograph consists of three principal parts: an electronic magnetic compass, a power pack, and a plotting desk on which a moveable pencil actually draws the maps. All three parts are interconnected by means of electrical cables and flexible shafts. In addition to its use as a map-maker it can be operated to plot the position of objectives relative to a given base, such as the location of guns to field headquarters. It can also be used for land navigation, locating a rendezvous for combat and supply units; field artillery surveys; engineer reconnaissance and the tactical control of movements.

Until very recently it was on the restricted list, but now its story can be told. Two facts are necessary in plotting a course, the distance to be covered and the direction of travel. The Odograph determines the distance traveled by means of a speedometer attached by a flexible cable to the transmission of the vehicle on which it is mounted. Direction is determined by means of a magnetic compass, properly corrected by a special electronic unit so that the iron and steel in the vehicle will not affect the delicate compass. These two factors, distance and direction, are fed automatically into the mechanical brain of the plotting unit, a maze of wheels, wires, and cogs that actuates the plotting pencil which draws a map of the route traveled on a sheet of graph paper placed on the map table. The electrical power needed to operate the Odograph comes from the battery of the vehicle, and a special power pack raises the battery voltage to the values required in the electrical circuits.

The Odograph can plot to any scale from 1 to 20,000 to 1 to 500,000. making it possible to draw a route map showing all the roads in a specified area to the same scale as a topographic map, which shows no roads. By placing the Odograph over the topographic map, field com- i manders can get a complete road and topographic mapâ€”just what is needed to carry out operations against an enemy. The margin of error in the device is negligibleâ€” between one and three per cent. In terms of miles that usually means not more than a stone’s throw.

In addition to its map drawing equipment, the Odograph has an azimuth dial which indicates the direction of the vehicle at any moment. Special counters tell at a glance the number of miles traveled north, south, east, and west, as well as the total miles traveled. Thus a trip of eleven miles might be indicated on the Odograph as six miles north, two miles west, one mile south, and two miles east. The instrument is built so ruggedly that it wall take a lot of pounding and jouncing while in the field and still function.

After months of continued production research involving many firms, the Odograph was put into mass production about a year ago. Today the machine is built exclusively by the Monroe Calculating Machine Company, which solved many of the difficult production problems which arose. Monroe’s president. E. F. Britten, Jr. himself an engineer, worked out some of the knottiest difficulties.

It was two Monroe experts who became lost in Washington while delivering the Odograph to the Engineer Board. Their use of it to get them to Fort Belvoir points the way to how it can be used by postwar motorists. Following a road map will be a cinch with the Odograph. Just slip the map into the plotting desk, adjust the scale of the device to that of the map, and keep the moving pencil on your route. It will tell you when you’ve taken a wrong turning. The Odograph is not only a contribution to the war effortâ€”it’s also a boon to every family in America. Think of all the arguments over which road to take that will be done away!