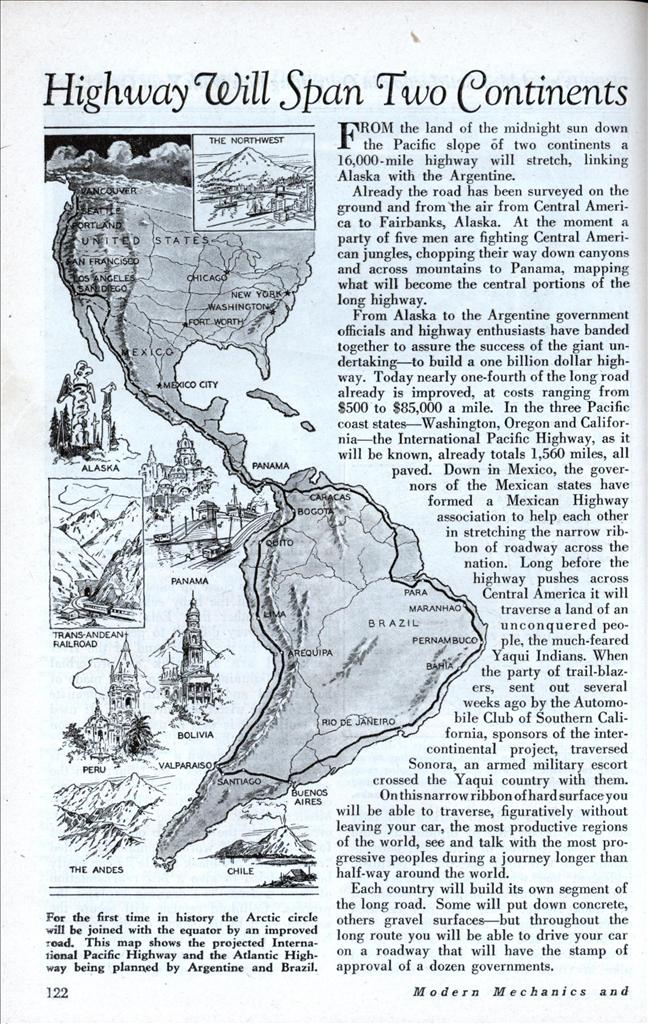 FROM the land of the midnight sun down the Pacific slope of two continents a 16,000-mile highway will stretch, linking Alaska with the Argentine.

Already the road has been surveyed on the ground and from the air from Central America to Fairbanks, Alaska. At the moment a party of five men are fighting Central American jungles, chopping their way down canyons and across mountains to Panama, mapping what will become the central portions of the long highway.

From Alaska to the Argentine government officials and highway enthusiasts have banded together to assure the success of the giant undertaking—to build a one billion dollar highway. Today nearly one-fourth of the long road already is improved, at costs ranging from $500 to $85,000 a mile. In the three Pacific coast states—Washington, Oregon and California—the International Pacific Highway, as it will be known, already totals 1,560 miles, all paved. Down in Mexico, the governors of the Mexican states have formed a Mexican Highway association to help each other in stretching the narrow ribbon of roadway across the nation. Long before the highway pushes across Central America it will traverse a land of an unconquered people, the much-feared Yaqui Indians. When the party of trail-blazers, sent out several weeks ago by the Automobile Club of Southern California, sponsors of the intercontinental project, traversed Sonora, an armed military escort crossed the Yaqui country with them.

On this narrow ribbon of hard surface you will be able to traverse, figuratively without leaving your car, the most productive regions of the world, see and talk with the most progressive peoples during a journey longer than half-way around the world.

Each country will build its own segment of the long road. Some will put down concrete, others gravel surfaces—but throughout the long route you will be able to drive your car on a roadway that will have the stamp of approval of a dozen governments.