I think that an “Eggs Laid While You Wait” place would make a killing in Brooklyn today. 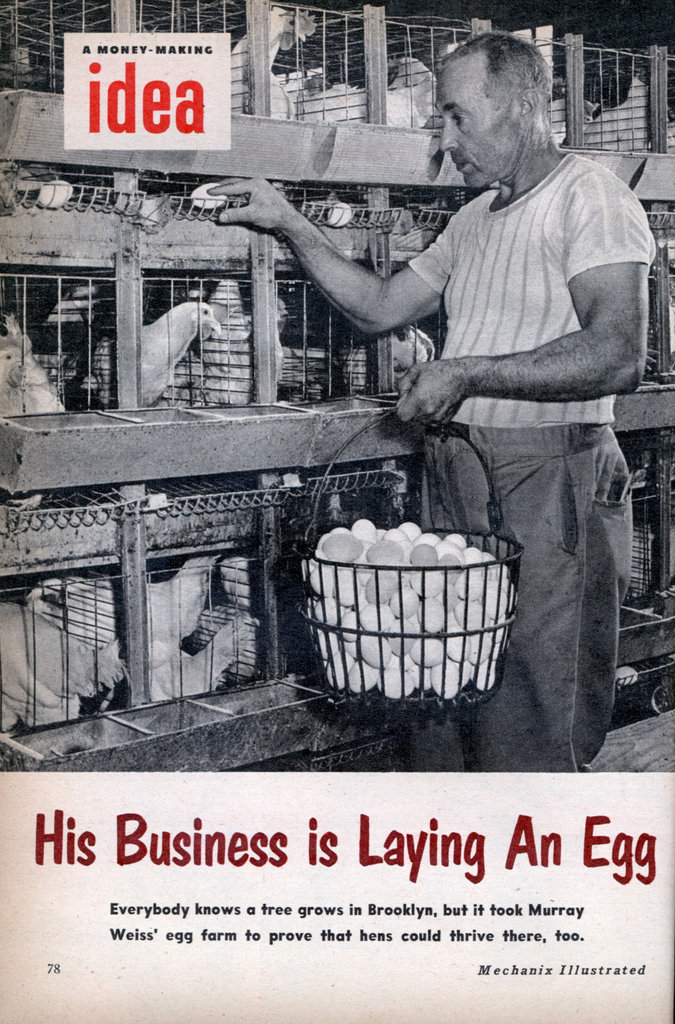 His Business is Laying An Egg

Everybody knows a tree grows in Brooklyn, but it took Murray Weiss’ egg farm to prove that hens could thrive there, too.

THERE’S a chicken ranch deep in the heart of Brooklyn where hens lay eggs while you wait.

More than 3,500 white leghorns working on the fowl line in this indoor farm deliver about 130 dozen eggs daily. And they are sold direct to the consumer.

The indoor farm, known as the Weiss-Way Egg Farm, is an idea developed by Murray Weiss. A former farmer and graduate in husbandry of the New Jersey State Agricultural School, Weiss conducts his business on a purely scientific system.

Each chicken is treated as an individual personality. She receives personal attention from Mr. Weiss just as though she were a patient under a doctor’s care. Then, when the hen reaches the age of 5-1/2 months â€”having been bred by Mr. Weiss in his own hatcheryâ€”she is housed in one of the 3,500 cubicles that line the indoor farm.

When the hen goes into business, she gets a chart. Mr. Weiss keeps a daily record of her production. If she fails to deliver a minimum of 175 eggs the first year, she is replaced by another chicken and sold for meat at the city markets.

Usually, a hen is in the egg-laying business for about three years. In the second year, her production drops about 20 per cent; more in the third year. Then she, too, is sold for table food.

Customers are constantly amazed at the daily egg production at the indoor farm. Many have seen their first chickens actually laying. Some customers have favorite chickens and watch them through a glass wall. Then, Mr. Weiss gathers the eggs in a basket and wraps up the order.

Many customers are surprised to learn that a chicken lays eggs without being mated with a rooster. Weiss constantly has to disillusion his uninformed city folks. “Mating a hen with a rooster is primarily done for hatching,” Mr. Weiss tells the curious ones. “And we use one rooster for every 18 hens.”

Murray Weiss has been interested in poultry husbandry for 25 years and gained first hand experience on farms in Connecticut, New York and New Jersey.

One day he was talking to a big poultry producer who bemoaned the fact that his profits were small compared to those of the middlemenâ€”the wholesalers, retailers and brokers.

That gave Weiss some food for thought. He called on brokers, wholesalers and retailers and found out the margin of profit each made on eggs before they reached the consumer. The idea of an indoor farm lodged in the back of his head.

Thus, in 1936, armed with $3,000 he had saved as a farm worker, Weiss invaded Brooklyn to try out his idea. He ran into one immediate obstacleâ€”zoning laws.

After a three-month search, however, Weiss found a spot at 15 Fairfield Avenue which was far enough away from thickly populated sections. He rented the building, which he now owns, and started in business in the 20-by-80 foot structure. He built individual cubicles out of pine boards and chicken screening. Then, he bought 600 hens and had a big sign painted “Eggs Laid While You Wait,” which he strung across the outside of the building.

People who saw the sign stopped and gaped. Many thought it was a gag, so they wandered into the indoor chicken ranch. Sure enough, chickens were laying eggs. Surprised by the truth of the sign, the doubting-Thomases decided to try the freshly laid eggs. They raved about the quality.

Soon, they were coming back for more, bringing new customers with them.

Word-of-mouth advertising spread throughout Brooklyn. People drove to the egg farm from distant points and placed regular orders with Weiss.

As business boomed, Weiss expanded his plant to a 40-by-100 foot one-story building. He arranged his production factory in tiers three decks high with 100 cubicles on each deck. This not only conserves room but also affords Weiss an opportunity to keep close check on each hen.

This caged method tends to produce fresher eggs than those which are laid on outdoor farms. The reason for this, explains Weiss, is that the normal temperature of a chicken is 106 degrees. When a hen lays an egg outdoors, she generally sits on it for a long time keeping it warm. But, eggs, to be absolutely fresh, must cool off immediately after passage. When a Weiss hen lays an egg indoors, it cools off because it immediately rolls down a chute into a basket.

The age-old theory that white eggs are better than brown is disclaimed by Weiss.

To prove his point to skeptics, Weiss imported from South America five Auracuana chickens that lay green eggs. Although Weiss proved beyond a shadow of a doubt that the color of shells had nothing to do with quality, customers still insisted on white eggs.

When chicks are about 12 weeks old, Weiss vaccinates them against fowl pox and bronchitis, immunizing them for life. In this way, he keeps his mortality down to almost zero.

What’s more, when the chickens are raised in cages, they are free from poultry raisers and farmers who are common carriers of virus. Weiss does not allow poultry dealers in his plant for just that simple reason.

Weiss’ egg ranch has turned into a tremendous business, contracting for feed by the year. He uses two tons of mash each week plus 500 pellets. He breeds about 3,000 chickens a year. Oddly enough, his operation is run by just himself and one .helper for the compact system is very efficient. And this two-man operation brings a fine return to the men who run it.

When people say that Murray Weiss’ business is laying eggs, he just laughs. “Sure,” he says “golden eggs.”