Up until I actually read the article I thought those were animal legs. 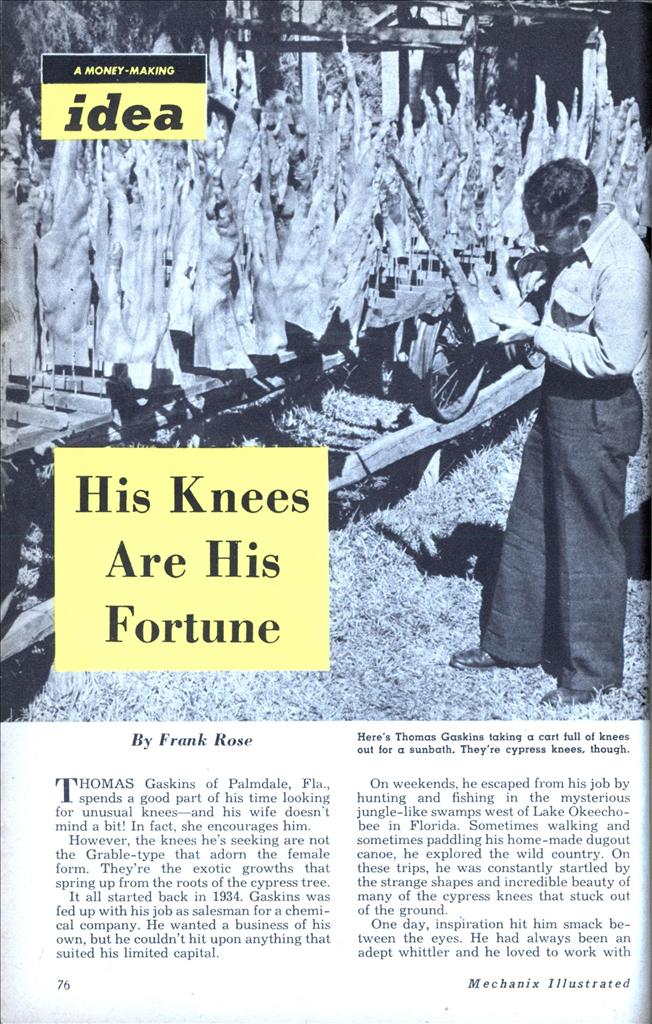 His Knees Are His Fortune

THOMAS Gaskins of Palmdale, Fla., spends a good part of his time looking for unusual knees—and his wife doesn’t mind a bit! In fact, she encourages him.

However, the knees he’s seeking are not the Grable-type that adorn the female form. They’re the exotic growths that spring up from the roots of the cypress tree.

It all started back in 1934. Gaskins was fed up with his job as salesman for a chemical company. He wanted a business of his own, but he couldn’t hit upon anything that suited his limited capital.

On weekends, he escaped from his job by hunting and fishing in the mysterious jungle-like swamps west of Lake Okeechobee in Florida. Sometimes walking and sometimes paddling his home-made dugout canoe, he explored the wild country. On these trips, he was constantly startled by the strange shapes and incredible beauty of many of the cypress knees that stuck out of the ground.

One day, inspiration hit him smack between the eyes. He had always been an adept whittler and he loved to work with tools. Perhaps, here in the woods, nature had provided him with the raw material for the new business he was seeking!

On the next trip, he took an axe along with him, cut several of the more interesting specimens and took them home. Carefully, he peeled off the bark from one of the knees. Underneath, he discovered a richness of color and a beauty of grain that fairly took his breath away. He knew then that he had found his life’s work, and several weeks later he quit his job. With his wife Virginia he moved into the cypress swamps where he built a home with his own hands.

Here they lived in pioneer fashion with no modern facilities, while Gaskins gathered hundreds of unusual knees. After peeling off the bark, he hollowed them out with drills and chisels and made them into flower vases, bookends, lamp bases, pipe racks and other similar items. When he had several hundred items in stock, Gaskins placed a large cypress knee as a sign on the near-by highway U. S. 27. On it he carved Emerson’s words: “If a man writes a better book, or makes a better mousetrap than his neighbor, the world will make a beaten path to his door, though he build his home in the woods.” An arrow pointed to Gaskins’ home in the swamp.

By trial and error, Gaskins finally developed the process which he uses on cypress knees today. After carefully selecting the knees, he places them in a large metal box where they are steamed. This enables him to peel them more easily. A sharp knife is sufficient for some; but for the more intricate ones Gaskins uses delicate dental tools.

Then he evens up the bases and eliminates the axe marks with his electric saw. Often he cuts the larger knees into three or four smaller objects. After this, they are hollowed out by means of electric drills and long-handled gouges. This is necessary to prevent the surface from cracking as the knee dries.

The knees are kept in the sunshine from three weeks to several months so that they will dry and color. This sun treatment gives the peeled knee a beautiful, bronze-like sun tan. After the knees are thoroughly seasoned, Gaskins’ gifted imagination and clever fingers transform them into vases, lamp bases, smoking stands, pipe racks, gun racks, trash baskets, merchandise displays, clock bases, and other such items, about fifty in all.

No stain or varnish goes into the finished products, nature taking care of that with a rich stain and wax-like finish which ranges from a light maple to a deep red. Gaskins does no carving or other ornamental work on the knees. He is content merely to uncover nature’s exquisite handiwork and display it to its best advantage.

“Nature is the real artist,” he says reverently, “I am only her helper.”

Gaskins insists that anybody with imagination and a bit of manual skill can accomplish as much in his own environment. If not with cypress knees, he says, it may be with cocoanut shells, corn cobs or sea shells. But, if you look around your own neighborhood you’re bound to find great money-making possibilities in simple things.

Gaskins still selects and cuts all of the knees himself while out hunting and fishing. He insists on doing this because he can usually visualize the finished product as he looks at the rough root extension on the ground.

“Why should I go in for more business?” he asks with a smile on his youthful face. “Then I would become a slave to my work. Now I am free to hunt and fish whenever I want to and I make all the money I need merely by doing something I love.”