Sounds like a great idea because no one would ever consider disabling their disk dispenser. 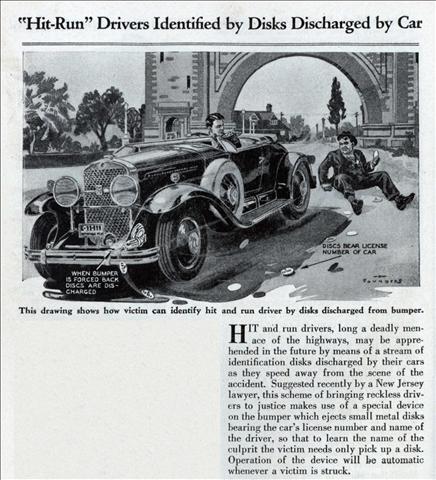 “Hit-Run” Drivers Identified by Disks Discharged by Car
HIT and run drivers, long a deadly menace of the highways, may he apprehended in the future hy means of a stream of identification disks discharged by their cars as they speed away from the scene of the accident. Suggested recently by a New Jersey lawyer, this scheme of bringing reckless drivers to justice makes use of a special device on the bumper which ejects small metal disks bearing the car’s license number and name of the driver, so that to learn the name of the culprit the victim needs only pick up a disk. Operation of the device will be automatic whenever a victim is struck.