Mechanix Illustrated
Issue: May, 1950
Posted in: House and Home, Transportation
No Comments on Hitchhiking Houses (May, 1950) 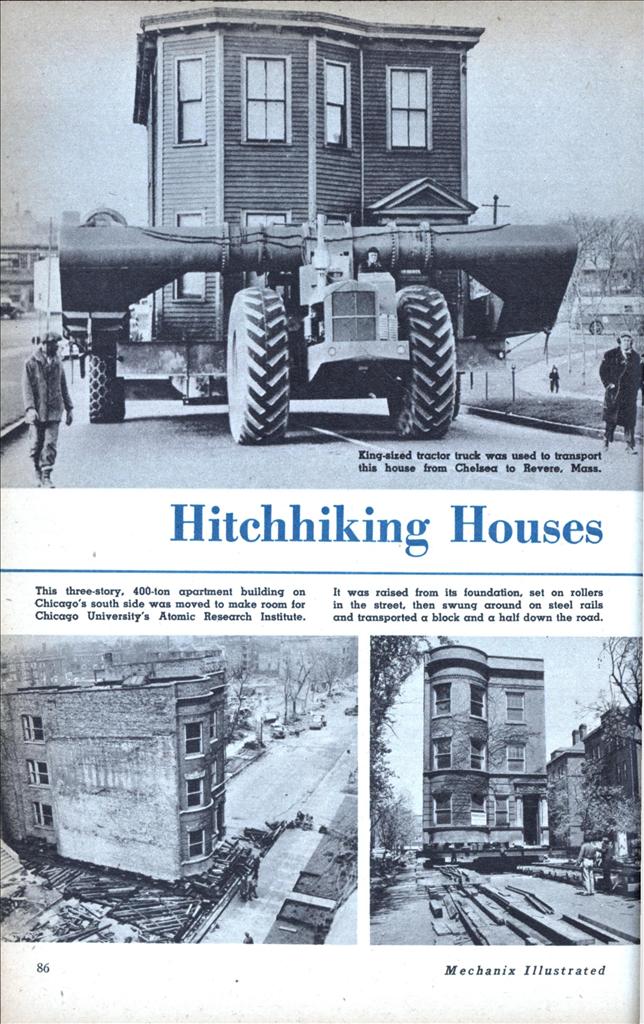 IT scared hell out of a grizzled prospector who was walking his mule on the hot sands of the New Mexico desert. It gave a small colony of migrant Hopi Indians the screaming-meemies and it made a couple of cowboys take the pledge then and there.

Cause of the panic was a huge, barnlike structure which was crawling along the roadless sand, apparently under its own power. And if that wasn’t enough to frighten the wits out of everyone, a muffled, ghost-like voice echoed from the interior of the vast building.

News of the “desert monster” spread like wildfire and it had the countryside in an advanced state of dithers until the explanation came. It was a gymnasium being moved lock, stock and rafters from the former Army Air Force pilot’s school at Fort Sumner to New Mexico College in Portales, 70 miles away.

A crew of 20 men had lifted the 350-ton building clean off its foundation with hydraulic jacks, deposited it onto nine trucks and 22 four-wheeled dollies, set up an inter-com loudspeaker system and started off across the desert. Inside the building, the loudspeakers bawled constantly with the foreman in the lead truck issuing instructions to the others. From the outside it looked as if the gym had suddenly decided to stroll off by itself.

The trip took exactly 69 days and on the 70th the college’s 525 students swarmed admiringly all over their brand new gym.

The gymnasium’s desert trek is part of an all-time record for migration of buildings being set in the country this year. Homes are rolling around all over, from a few inches to hundreds of miles. Small cottages, 14-story apartment houses, churches, firehouses and even entire communities are being trundled to new locations in every major city every day.

A novelty before the war, house-moving is big business today and getting bigger as cities wade into much-needed local improvements held up by war-born shortages of men, money and materials.

One big moving firm on the west coast has branched out. It buys up older houses, drags them to a huge lot and sells them like used cars— delivered!

Before the war a home-owner, slapped with an official document telling him that an express highway would be built through his living room, would pack up and find another place to live while the city condemned the house and tore it down. But now, what with the acute housing shortage, you just don’t destroy liveable dwellings. Instead you pick them up and lay them down elsewhere.

In New York City, when authorities found that 300 homes in Queens were squatting in the path of a proposed expressway, they decided to move all 300 homes to any section selected by the owners, with the city paying the freight.

The city got fine cooperation from the home-owners on that one but sometimes owners get huffy. Mrs. Dora Fruchs got into a temper when the house-movers showed up one morning to take her two-story brick dwelling out of the path of a proposed sewer in Brooklyn. She told the movers she hadn’t arranged yet for storage of her furniture and she was going to stay until she got good and ready to be moved. She slammed the door and went upstairs to bed.

But the house-movers had their orders and duty was duty, so they jacked up the house, put it on a truck and dragged it off.

Mrs. Fruchs awoke refreshed, looked out of her window and found that she was living two blocks away.

Nothing stymies a house-mover. The Los Angeles ‘office of the Star House Movers, Inc., one of the largest firms in the country, lists the following as objects moved in one year alone: 600 houses; 200 oil-well derricks; 100 steel storage tanks; 50 miscellaneous.

Doubtless under the heading of miscellaneous was the job ordered by Sid Grauman of Hollywood’s famed Chinese Theater. He wanted the Star people to come and move a 1500-pound deep-dish prune pie. Baked in a special 15-foot “pie-plate,” it was due at the theater for a special matinee Grauman was throwing for Los Angeles newsboys. But the bakery, after asking sardonically if Grauman cared to have it delivered or “will you eat it here,” decided against attempting to budge it.

Tom and Ed Frinell, who run the Star moving business, took the job in stride. They sent a crew and the big pie was carted expertly on dollies to the forecourt of the theater, where the hungry kids waded into it.

“And,” said Tom Frinell proudly, “we didn’t even break the crust.”

Charles T. Hanson, head of a moving firm in Dallas, Tex., matched this feat by hauling four 125-foot water towers almost a mile. Each tower held 100,000 gallons of water. Said Mr. Hanson with a pride as deep as the Frinells’: “We didn’t spill a drop.”

When a crew comes down to move a house, first step is to chart the smoothest, widest route, least encumbered by telephone wires or overhanging branches. It’s not necessarily the shortest. One mover went three miles out of the way to shift a house one downhill block.

Actual moving operations cannot begin until the house is disentangled from all connections —brick porches, fences, vines, fireplaces, trees, anything to which it may be attached.

Then plumbers detach metal links and electricians sever the utilities. When the house is freed, steel jacks, some capable of lifting 50 tons, hoist it from its foundations and set it down on low dollies equipped with pneumatic tires. The house is supported on the dollies either by heavy timbers or steel beams and then the big trucks come to haul it off.

Most trucks are equipped with special low-gear-ratio. rear ends for pulling massive loads and with clutches for starting off smoothly.

When a house gets rolling, the trucks can hit up to 20 mph on a flat road without rattling a window. In fact, the actual moving process is so smooth that house-moving parties, held en route, are becoming a minor fad where fads usually start—in Hollywood.

The 35 families in a New York apartment house which was shifted 208 feet fared pretty well. They rode along with the building because the understanding landlord had rubber connections attached to the water pipes and flexible copper ones to the electrical arteries.

This care and ingenuity which pays off in comfort and safety earns high rewards for the workmen. Their pay scales rank among the highest in any industry. The average member of a crew earns about $117 weekly while foremen draw down $9000 a year. Hourly pay ranges between $1.75 and $2.50, but the crews garner much overtime since many jobs are done on Sundays.

Moving a house is by no means inexpensive, but it’s lots cheaper than tearing down and rebuilding. The cost of moving an average seven-room dwelling runs about $3000. If no unusual difficulties present themselves, a six-story building can be moved for roughly $20,000. Some bills go considerably higher. A Los Angeles firm cut a 14-story building in half, removed a 10-foot section and shoved the front half back to permit widening of the street. It cost the landlord $100,000.

In Brooklyn, workers once misjudged a one-inch rise in the street while they were carrying off a two-story stucco house to make way for a housing development. The roof of the house brushed against a high tension cable carrying 2400 volts. One workman was killed, another severely burned. Despite the dangers in the trade, accidents like this are rare.

The Consolidated House Movers, also of Los Angeles, once went out to shift a tiny cottage on a wealthy farm to a point beyond a grove of orange trees. When Edwin Agnew, head of the company, suggested that some trees be cut down to facilitate the moving, the rich farmer was aghast. He wouldn’t part with a branch.

So Agnew shrugged and jacked the cottage above the treetops and pulled it through the grove on dollies. The little house was worth several hundred dollars. Total cost of moving: $10,000. But the farmer was happy—he didn’t lose a branch.

If this farmer appears to have lost money on that deal, an Ozark farmer cashed in on his house-moving experience. He had his barn shifted 75 feet to increase his tillage area. He was at work filling in the foundation hole when his shovel struck something metallic.

It was a rusted steel box containing a bankbook showing $3000 in deposits and several dozen shares of stock worth a total of $2000, all hidden by the farmer’s grandsire, long since deceased.