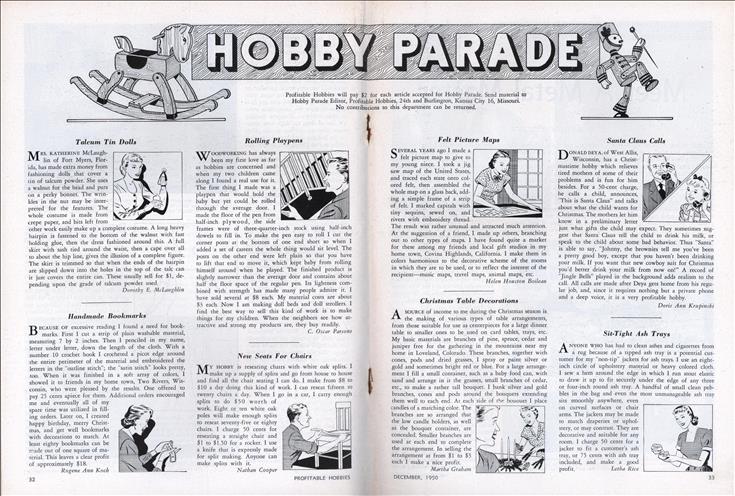 Mrs. Katherine McLaughlin of Fort Myers, Florida, has made extra money from fashioning dolls that cover a tin of talcum powder. She uses a walnut for the head and puts on a perky bonnet. The wrinkles in the nut may be interpreted for the features. The whole costume is made from crepe paper, and bits left from other work easily make up a complete costume. A long heavy hairpin is fastened to the bottom of the walnut with fast holding glue, then the dress fashioned around this. A full skirt with sash tied around the waist, then a cape over all to about the hip line, gives the illusion of a complete figure. The skirt is trimmed so that when the ends of the hairpin are slipped down into the holes in the top of the talc can it just covers the entire can. These usually sell for $1, depending upon the grade of talcum powder used.
Dorothy E. McLaughlin

Because of excessive reading I found a need for bookmarks. First I cut a strip of plain washable material, measuring 7 by 2 inches. Then I penciled in my name, letter under letter, down the length of the cloth. With a number 10 crochet hook I crocheted a picot edge around the entire perimeter of the material and embroidered the letters in the “outline stitch”; the “satin stitch” looks pretty, too. When it was finished in a soft array of colors, I showed it to friends in my home town, Two Rivers, Wisconsin, who were pleased by the results. One offered to pay 25 cents apiece for them. Additional orders encouraged me and eventually all of my spare time was utilized in filling orders. Later on, I created happy birthday, merry Christmas, and get well bookmarks with decorations to match. At least eighty bookmarks can be made out of one square of material. This leaves a clear profit of approximately $18.
Rogene Ann Koch

Woodworking has always been my first love as far as hobbies are concerned and when my two children came along I found a real use for it. The first thing I made was a playpen that would hold the baby but yet could be rolled through the average door. I made the floor of the pen from half-inch plywood, the side frames were of three-quarter-inch stock using half-inch dowels to fill in. To make the pen easy to roll I cut the corner posts at the bottom of one end short so when I added a set of casters the whole thing would sit level. The posts on the other end were left plain so that you have to lift that end to move it, which kept baby from rolling himself around when he played. The finished product is slightly narrower than the average door and contains about half the floor space of the regular pen. Its lightness combined with strength has made many people admire it. I have sold several at $8 each. My material costs are about $3 each. Now I am making doll beds and doll strollers. I find the best way to sell this kind of work is to make things for my children. When the neighbors see how attractive and strong my products are, they buy readily.
C. Oscar Parsons

My hobby is reseating chairs with white oak splits. I make up a supply of splits and go from house to house and find all the chair seating I can do. I make from $8 to $10 a day doing this kind of work. I can reseat fifteen to twenty chairs a day. When I go in a car, I carry enough splits to do $50 worth of work. Eight or ten white oak poles will make enough splits to reseat seventy-five or eighty chairs. I charge 50 cents for reseating a straight chair and $1 to $1.50 for a rocker. I use a knife that is expressly made for split making. Anyone can make splits with it.
Nathan Cooper

Several years ago I made a felt picture map to give to my young niece. I took a jig saw map of the United States, and traced each state onto colored felt, then assembled the whole map on a glass back, adding a simple frame of a strip of felt. I marked capitals with tiny sequins, sewed on, and rivers with embroidery thread. The result was rather unusual and attracted much attention. At the suggestion of a friend, I made up others, branching out to other types of maps. I have found quite a market for these among my friends and local gift studios in my home town, Covina Highlands, California. I make them in colors harmonious to the decorative scheme of the rooms in which they are to be used, or to reflect the interest of the recipient—music maps, travel maps, animal maps, etc.
Helen Houston Boileau

A source of income to me during the Christmas season is the making of various types of table arrangements, from those suitable for use as centerpieces for a large dinner table to smaller ones to be used on card tables, trays, etc. My basic materials are branches of pine, spruce, cedar and juniper free for the gathering in the mountains near my home in Loveland, Colorado. These branches, together with cones, pods and dried grasses, I spray or paint silver or gold and sometimes bright red or blue. For a large arrangement I fill a small container, such as a baby food can, with sand and arrange in it the grasses, small branches of cedar, etc., to make a rather tall bouquet. I bank silver and gold branches, cones and pods around the bouquets extending them well to each end. At each side of the bouquet I place candles of a matching color. The branches are so arranged that the low candle holders, as well as the bouquet container, are concealed. Smaller branches are used at each end to complete the arrangement. In selling the arrangement at from $1 to $3 each I make a nice profit.
Martha Graham

Donald Deya, of West Allis, Wisconsin, has a Christmastime hobby which relieves tired mothers of some of their problems and is fun for him besides. For a 50-cent charge, he calls a child, announces, “This is Santa Claus” and talks about what the child wants for Christmas. The mothers let him know in a preliminary letter just what gifts the child may expect. They sometimes suggest that Santa Claus tell the child to drink his milk, or speak to the child about some bad behavior. Thus “Santa” is able to say, “Johnny, the brownies tell me you’ve been a pretty good boy, except that you haven’t been drinking your milk. If you want that new cowboy suit for Christmas you’d better drink your milk from now on!” A record of “Jingle Bells” played in the background adds realism to the call. All calls are made after Deya gets home from his regular job, and, since it requires nothing but a private phone and a deep voice, it is a very profitable hobby.
Doris Ann Krupinski

Anyone who has had to clean ashes and cigarettes from a rug because of a tipped ash tray is a potential customer for my “non-tip” jackets for ash trays. I use an eight-inch circle of upholstery material or heavy colored cloth. I sew a hem around the edge in which I run stout elastic to draw it up to fit securely under the edge of any three or four-inch round ash tray. A handful of small clean pebbles in the bag and even the most unmanageable ash tray sits smoothly anywhere, even on curved surfaces or chair arms. The jackets may be made to match draperies or upholstery, or may contrast. They are decorative and suitable for any room. I charge 50 cents for a jacket to fit a customer’s ash tray, or 75 cents with ash tray included, and make a good profit.
Letha Rice