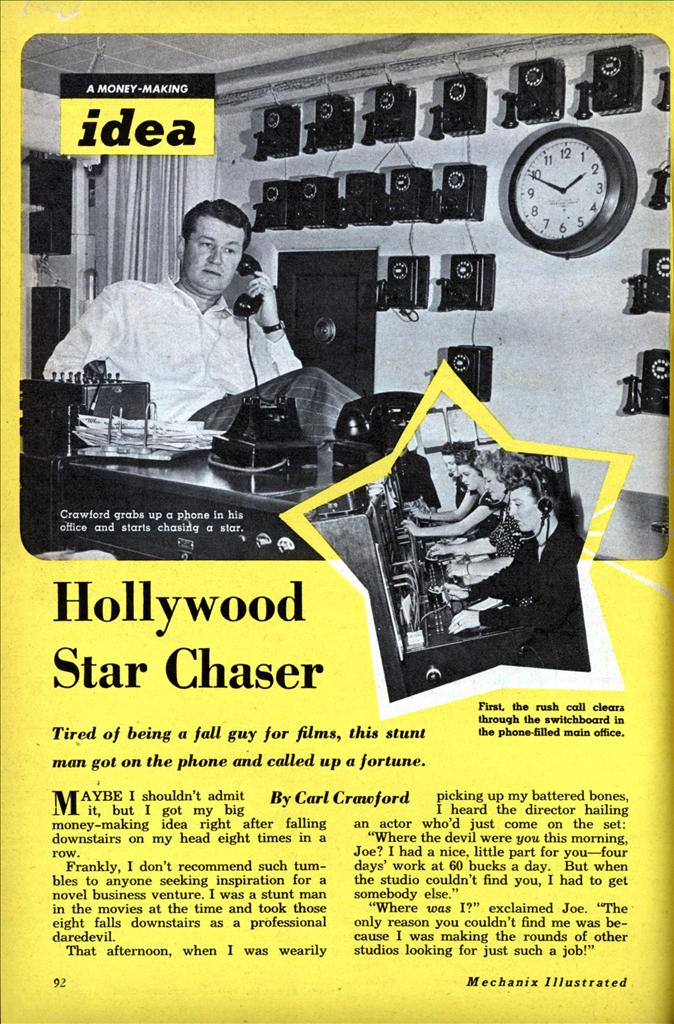 Tired of being a fall guy for films, this stunt man got on the phone and called up a fortune.

MAYBE I shouldn’t admit it, but I got my big money-making idea right after falling downstairs on my head eight times in a row.

Frankly, I don’t recommend such tumbles to anyone seeking inspiration for a novel business venture. I was a stunt man in the movies at the time and took those eight falls downstairs as a professional daredevil.

That afternoon, when I was wearily picking up my battered bones, I heard the director hailing an actor who’d just come on the set: “Where the devil were you this morning, Joe? I had a nice, little part for you—four days’ work at 60 bucks a day. But when the studio couldn’t find you, I had to get somebody else.”

“Where was I?” exclaimed Joe. “The only reason you couldn’t find me was because I was making the rounds of other studios looking for just such a job!”

While I applied liniment to my aching joints a few hours later, I kept thinking of Joe’s hard luck. That sort of thing was happening all the time in Hollywood because the studios so often needed the services of performers on an hour’s notice. Several times I had had the same depressing experience myself.

That’s when I got my money-making hunch. Now if I could set up an organization to take these emergency calls for actors and actresses—and find the people wanted in a hurry by the studios—I could build up a thriving business.

There were two telephone exchanges in Los Angeles that located doctors in a rush. I thought I could do the same thing for the thousands of actors and other free-lance workers in Hollywood.

I was an easy-going fellow in my early twenties and had knocked around at a number of odd jobs. Besides banging about as a stunt man, I was a movie bit player. I also had my own band, in which I played the piano or a cornet and sang the vocals. Among other things, too, I had fought as a middleweight boxer, under the name of Kit Carson, in semifinal bouts in the local rings.

I gave up all my other work, though, and gambled everything, including my $500 bank account, on my phone-call idea. In the beginning, it would be necessary to devote my entire time to my work. I realized I couldn’t get film people as customers if I competed with them as film performer and stunt man.

During the next week I visited every casting office in Hollywood. The response was enthusiastic.

‘That’s just what our end of the business needs,” the casting agents told me. ‘The people in our offices waste half their time trying to get in touch with actors who aren’t home. Anyone who wants to take the job of finding them will have our thanks and wholehearted cooperation.”

It looked like a swell deal then. I figured I’d use my home as my business office, especially since my bankroll was too small to set up a new place or to hire anyone to help me. Then, too, the casting offices called actors around the clock, and that meant I had to stick around and be ready for business 24 hours a day. All I needed, I thought, was a telephone switchboard and enough clients to pay expenses during the first few months while I was getting started.

I soon found that I’d been a bit too optimistic. My first setback came when the phone company refused to install a switchboard.

“So what?” I told myself. I’d operate on a single phone. When enough calls started coming in, I reasoned, the phone company would be glad to give me that switchboard.

I was sure that actors and other free-lance movie workers would rush to use my service and let me take calls and track them down when they were buying groceries, shooting pool, playing golf or visiting relatives.

I set the fee as low as possible—$5 to $20, according to the earning power of the customers. After six months, though, I had only 50 people on my list.

In my eagerness, I had overlooked one vital factor. I’d gone into my strange business in 1932, at the height of the Great Depression. Most movie actors, like everyone else, were finding it tough to make ends meet. Many of these 50 customers I did have during the first six months of my new business couldn’t pay promptly. That first year was really rugged.

I managed to scrape along only by going back to a trade I hated—fighting. Unfortunately it was the only job I could get that didn’t directly compete with the actors I was rounding up for the studios.

At the end of a year, I had 200 customers— and finally got a switchboard. At first, many actors were reluctant to take the service for two good reasons. First, they were afraid that I would tip off some other performer, who was a friend, that a good job was open at the studio. And, secondly, they often didn’t want anyone to know where they were every hour of the day and night.

Another problem was getting the studios to call our number first. Their natural impulse was to phone the actor at his home or to call his agent. But, in the end, they all found it more efficient to call me immediately.

Gradually, the performers of Hollywood learned they could trust me to keep any secrets they had.

I found out that everyone lives by a pattern. If a customer liked Turkish baths, I’d remember that and call him at every Turkish bath in town, if I couldn’t find him anywhere else. I set up a filing system to keep a record of the calls made to, and received from, every client I had. When somebody wanted him, I’d look through these records of old calls and various numbers where we’d found him before.

Slowly, I built up my reputation in Hollywood as a “telephone detective” who could find actors and actresses no matter where they had gone, and locate them quickly, too!

Today, as soon as we get a new client, we find out all we can about him. We have him fill out a questionnaire, telling us his clubs, his favorite restaurants, who his barber, clothier, best friends and masseur are. We get a list of numbers to call when a studio wants our client. Believe me, we have found stars in the strangest places!

If ever a star needed the services of a phone detective, it was the late John Barrymore.

I stepped in with my call service and won the star’s confidence. During the last years of his life, Barrymore gave out only my Call Club’s number, Hollywood 6211.

Always generous, John Barrymore paid me $1000 a month for my trouble. That was the fee that made the Call Club solvent. After that, we never had any money problems at all.

Today, I probably know more about the private lives of the Hollywood stars—all of whom have at one time or other been subscribers to my service—than any other living person. But when the gossip columnists prod me for tips on scandals and other hot stories, naturally, I’m not talking.

The whole success of my business rests on my ability to keep my mouth shut. The 10 operators who work my five switchboards on day and night shifts are carefully screened on their ability to keep the information they gather in their work strictly to themselves. I’d fire any one of them who broke our rule of secrecy. But I’ve never had to in the 17 years I’ve been in this business.

The Call Club now has three busy offices, with the main one on Hollywood Boulevard. Among the hundreds of stars and featured players who are members of the club are Marilynn Maxwell, Keenan Wynn, Ava Gardner, Lena Home and Pete Lorre.

Every day there’s something exciting or amusing in my business. One morning Paramount called up in a panic because they couldn’t get in touch with Barry Fitzgerald, who was working in one of their pictures. Their whole production was being held up for Fitzgerald and they wanted him but bad!

We called Fitzgerald at home and everywhere else we thought he might be. No luck. Then it occurred to me that the old fellow might be sleeping so soundly that he hadn’t heard the phone.

Because of the emergency, we phoned the Hollywood Police Department and asked them to go to Fitzgerald’s home and wake him up. They got him up for us and rushed him to the studio.

I’ve called Honolulu, New York, and Boston just to find a film player. I often spend hundreds of dollars to track down an actor or actress. My phone bills run $1000 a week!

Of course, there’s only one Hollywood— and, personally, I love the place for the fine life it’s giving me. But, no matter where you live, there are always local stars—doctors, lawyers, business executives, the Mayor and other leading citizens. They need phone detectives in their business and professions as much as those fabulous people in filmland do. Line up a few of those for your own phone-paging setup, gain their confidence that you can keep your mouth shut about their personal affairs—and you’ll be surprised how soon you’ll make money chasing stars, too.

Today, my Call Club is a gold mine, with 3500 customers who dig up from $7.50 to $75 every month for my phone-chasing service. I now own a small stable of racing horses and plan to buy a local radio station soon.

But I still get my big kick out of getting a call through fast to the little fellows, the bit players who always need work to keep going. After all, it was the trouble of Joe, another bit player, back in 1932, that first started me chasing Hollywood stars, wasn’t it?