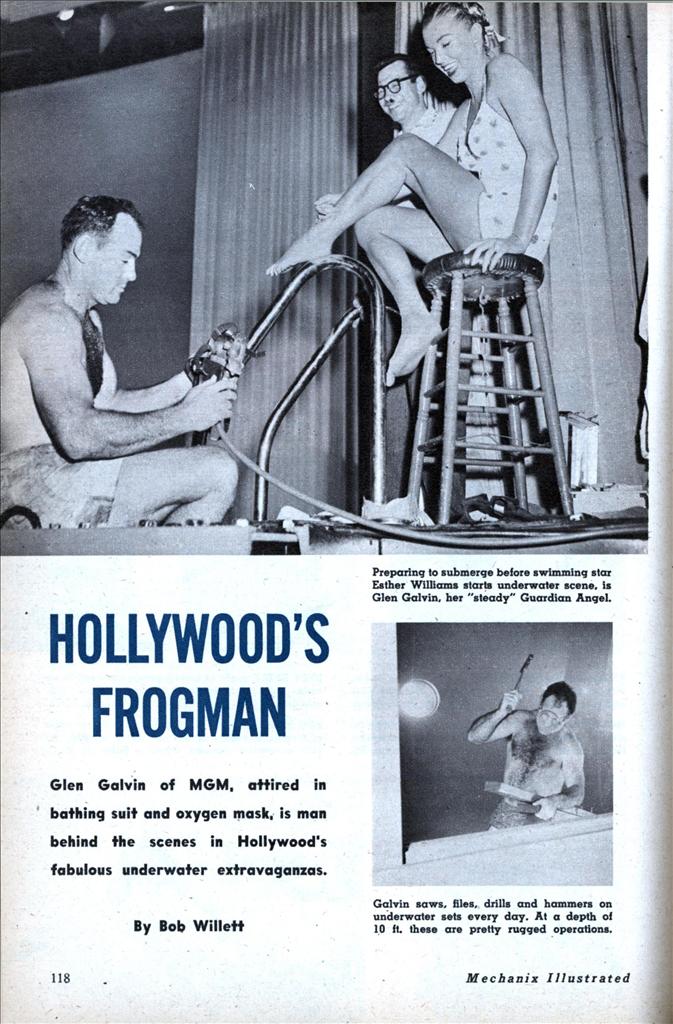 “A good one,” they heard director Charles Walters shout, “Print it!”

Glen Galvin slipped off his mask and quickly untied Esther Williams. They had just completed an underwater scene for the live-action cartoon sequence of Dangerous When Wet in which the MGM mermaid shares star billing with the comical cat-and-mouse team, Tom and Jerry. * Few fishermen would think of throwing back such a catch as the curvaceous swimming star and most men would consider working with Miss Williams nice work, indeed. Galvin is no exception. However, he wants it known that being a studio skin-diver, although enjoyable for the most part, isn’t as simple as it may sound. For one thing, his aquatic activities can be awfully hard on the nerves because Esther, whose father is a Los Angeles barge captain, has as much nerve as most males where water is concerned. Most actresses willingly accept doubles but she insists on doing the dangerous stunts herself. During filming of the one described above, Glen died a doz^n deaths.

“I kept thinking of what would happen if the line broke,” he says, “and I should be unable to get her out of the water before she ran out of air.”

Reducing the possibility of an accident to the absolute minimum is the reason he shadows her in every swimming scene. You never see him on the screen but he is always there, just out of camera range. He thinks it only common sense to avoid swimming or diving alone and never attempts anything underwater himself unless another expert swimmer is ready to assist him if necessary. His standing rule is, “If I don’t come up in three minutes, come down and look for me.”

In a movie made a few years ago, the script called for Esther to be imprisoned in a giant clamshell and the studio called for Glen to supervise construction and operation of this perilous prop. It was made to open and close through the use of micro- switches and remotely-controlled motors. During initial tests, a mechanical defect kept it closed with Galvin inside. Fortunately he was able to hold out until the movie mollusk could be pried open but the call was a little too close for comfort.

Following completion of Show Boat in 1951, it was decided to drain the large lake on Metro’s Lot 3 and allow The Cotton Blossom to settle on the bottom at the shallow end. Before this was done, Galvin went down and cleared away timbers and debris that might have damaged the hull when the boat was beached. He worked his way along in inky blackness, back and forth from port to starboard, shifting from stem to stern a double arm-span at a time. This cleaning-up operation brought back memories of his wartime salvaging experience, without which he probably wouldn’t have dared to do it.

He thinks entering the lower decks of a sunken ship is the most hazardous of the many odd assignments he’s had, recalling that once he was almost trapped in one on the bottom of the Red Sea. When he dived into the pitch-black engine room, he made a point of memorizing the number and position of stairways to aid in his ascent. However, a bump on the head made him lose his senses temporarily. His equipment consisted of a converted Italian gas mask and, though momentarily stunned, he managed to grope his way up by clinging to its air hose. The water temperature was nearly 90 degrees and marine life the most abundant he had ever encountered. A school of curious fish had followed him into the ship and it was while he was engaged in brushing some of them aside that he knocked his noggin on a bulkhead.

Perhaps because of this incident, Galvin is more afraid of getting lost underwater than anything else. He has often worked in water so dark or dirty that he couldn’t see his hand in front of his faceplate. The sensation, he says, is similar to being caught in a snow storm on land. It’s difficult to figure direction and easy to start going around in circles. Nevertheless, Glen doesn’t go for full-dress diving with weighted suit and air supply, nor does he usually make use of oxygen equipment of any kind.

“It’s not claustrophobia or anything like that,” he confesses. “It’s just plain caution. I like to depend on my own lung power and ability and, by keeping trim physically, I automatically insure myself against risk. I prefer to be in a position where I can put up a good fight for my life and have no desire to be a dead duck.”

The film capital frogman has only one complaint. Although he spends an average of five hours a day working in water and has waterlogged over 10,000 hours during his career, he’s never completely satisfied his love for swimming. Glen first met his wife Helen at the beach and their six-year-old daughter Kathleen and four-year-old son Bobbie are both accomplished swimmers. At his home in Manhattan Beach, Calif., he avidly pursues his hobby—skin diving!

Born in Melstone, Mont., Galvin got his first swimming lessons at the age of five in a creek on his father’s ranch. The family moved to California when he was still a child and when he started high school in Huntington Park, he joined the swimming team and played water polo. He went to the University of California at Los Angeles during the ’30’s where he made the football squad and saw action in the Rose Bowl. As a member of a Navy salvage crew, he helped refloat .a dozen merchant ships and a huge floating dry dock that had been sunk by the Italians in 1942.

“Galvin is a sinker,” a prop man pointed out. “Around the studio we call him Lead Head.”

I soon found out why. Whether he was born with the ability or acquired it as a result of his environment, he can sink in water to any depth at any time simply by stopping his swimming stroke. When he takes a header, he goes down like a shot. Even with his lungs full of air, he can lie flat on the bottom without rising unless he swims up. “I can’t float for sour apples,” he told me.

A skilled carpenter and an authority on water-resistant construction materials, Galvin has planted prop gardens, set up formations of fake coral, constructed complete furnished rooms and installed dance floors and playground equipment underwater. Of course, it is possible to do this type of work when a tank is empty but, as often as not, something objectionable is discovered after it is full. Because a halt in production to allow for draining and reconstruction can be costly, Glen does a lot of building and installing in water and he has learned the hard way that there is quite a trick to handling hammers, saws, wrenches and other tools below the surface. Construction crew members say they can always tell when he hits his thumb. The bubbles turn blue.

One of his most outstanding construction jobs was the huge glass tank, complete with live fish, used in Million Dollar Mermaid, the film biography of former swimming champion Annette Kellerman. Re-creating an accident that Miss Kellerman had experienced called for it to collapse on cue with Esther and 20,000 gallons of water pouring out through broken glass. While no actual test was made because of the expense involved, the scene was shot without a hitch, thanks to his planning and know-how.

His most memorable mishap was more humiliating than harmful. Artificial coral is made of glass cloth covered with laminae and its projecting edges can be as dangerous as barnacles. Before anyone else enters water where it has been set up, Glen goes down and files them smooth. While he was doing this for Dangerous When Wet he backed into a sharp corner that made him rise with more than his customary alacrity.