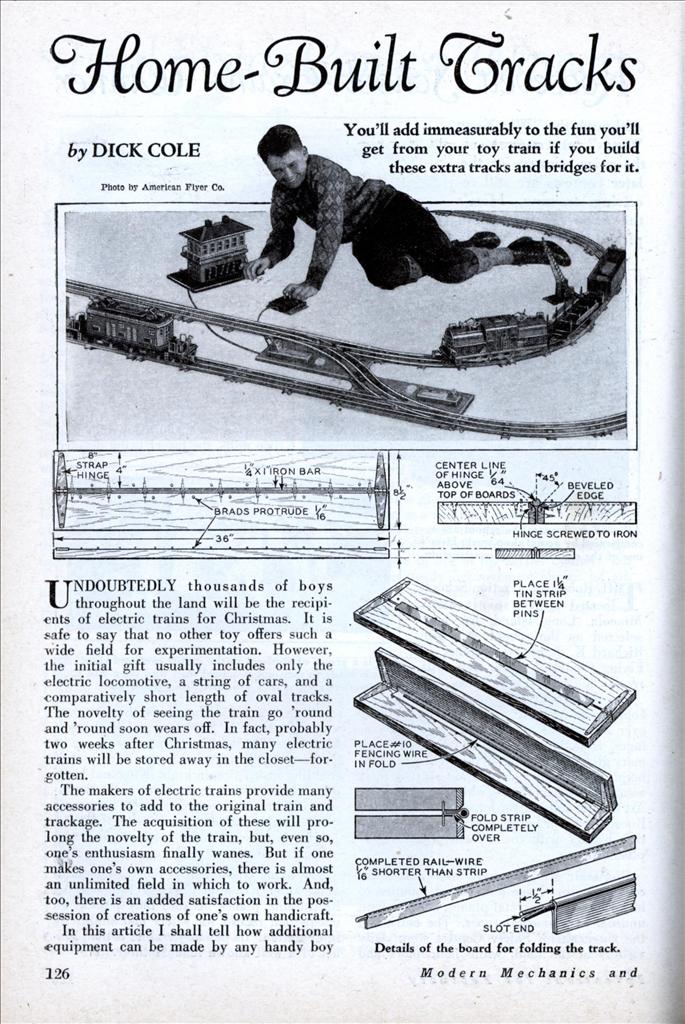 You’ll add immeasurably to the fun you’ll get from your toy train if you build these extra tracks and bridges for it.

UNDOUBTEDLY thousands of boys throughout the land will be the recipients of electric trains for Christmas. It is safe to say that no other toy offers such a wide field for experimentation. However, the initial gift usually includes only the electric locomotive, a string of cars, and a comparatively short length of oval tracks. The novelty of seeing the train go ’round and ’round soon wears off. In fact, probably two weeks after Christmas, many electric trains will be stored away in the closet—forgotten.

The makers of electric trains provide many accessories to add to the original train and trackage. The acquisition of these will prolong the novelty of the train, but, even so, one’s enthusiasm finally wanes. But if one makes one’s own accessories, there is almost an unlimited field in which to work. And, too, there is an added satisfaction in the possession of creations of one’s own handicraft.

In this article I shall tell how additional equipment can be made by any handy boy at a small cost. The first need which will be apparent to any owner of an electric train is more trackage. This can be made very easily. Strips of any sheet metal about %” thick will serve. But, in this case, some provision must be made for uniting the rail-ends to form a good electrical connection. The method adopted by all manufacturers of having a plug on one rail enter the tubular end of the other rail, is simple and affords a good contact, so I shall show how to make that style of rail.

Practically any thin, sheet metal can be used for the rails—copper, brass, galvanized iron, common tin. The latter is recommended. Sheet aluminum can be used, but there are some points in the fittings which should be soldered, and aluminum does not lend itself readily to soldering operations. Special solders can be had, but in any case, it is a messy, unsatisfactory job.

A special folding machine is essential if one is to turn out a good job. This offers no complications. A simple folding machine is shown in the drawings. This consists of two hardwood boards l”x4″-x36″ hinged together at the extreme ends only. The joining edges of the boards are faced with strips of 1/4″xl” iron. The edge of the iron is beveled off at a 45-degree angle, as shown in the enlarged end elevation. The center-line of the hinges should be not more than 1/64″ above the top surface of the boards. Obviously, the straps of the hinges are set into the boards. When the hinges are closed, the boards should be almost flat together.

After the boards are permanently hinged together, a row of pins made with small brads is set out on each board 5/8″ from the hinge line. The distance between the rows is 1-1/4″. The heads are cut off the brads and they are filed down so as to protrude only 1/16″ above the surface of the boards.

Next, a sheet of common tin is cut lengthwise into 1-1/4″ strips. These are placed, one at a time, into the folding machine. The boards are then folded over to a right angle. A length of 10 gauge fencing wire, 1/16″ shorter than the strip of tin, is laid in the fold, and the boards are closed over Hat. The result of this folding is a length of rail. Light tapping with a hammer may be necessary to close the tin tightly around the wire. The wire will have been set in the fold so as to protrude 1/2″ at one end. This wire can be bought at any hardware store, and is kept in stock in coils of big diameter. Do not roll it into a coil of smaller diameter or it will be harder to straighten. In the case of the middle rail, which serves only as a current conductor to the motor in the locomotive, the protruding end is split and spread like a cotter pin to afford a better contact between rails. In fact, it is a good policy to employ this method on all rails.

Next we shall take up the making of the cross-ties and assembling of the trackage. The plan, side and end elevation of a cross-tie are shown. These should be made of hardwood dressed on all sides. White maple is particularly recommended. The three slots to receive the rails, and the screw-holes at each end will be obvious to everyone. The two smaller slots, and the four additional holes will play their part later in operating some of the accessories. They should be made now, as it would be very awkward after the tracks are assembled.

There is no fixed rule for spacing the cross-ties. If they are placed very close— about an inch apart—the tracks will more closely resemble real railroad tracks. But, in this case, a great number of cross-ties will be required. Spaced three or four inches apart, they will serve their primary purpose equally as well.

The rails are secured to the cross-ties by gluing. Direct gluing between the metal and the wood would not prove very satisfactory. But if the lower part of the rail is wrapped with a strip of muslin copiously covered with glue, and is then forced snugly into the slot, a lasting glue job can be done. Boiled or cold glue can be used.

Curves, of course, are essential in laying out any railroad. After a length of straight track has been formed, it can not be bent into a curve. Each curve must be separately shaped, and is a rigid, fixed length of trackage when done. Any curve to be laid out is first computed on a board or a table-top, and the pattern marked out. The cross-ties are then screwed temporarily to the surface. On a curve, the ties always point to the center of the circle of which the curve is a part. In other words, they are set radially. After the ties are screwed down temporarily, the rails are shaped into the slots and glued as in the case of the straight trackage. After the glue has set, the screws can be removed from the cross-ties, and the trackages will be a rigid assembly.

Next we shall take up cross-overs and switches. One of the drawings shows an ordinary right angle cross-over. After one has familiarized one’s self with the method of making tracks, the making of the cross-overs will be quite obvious. Rather than cutting the slots in the cross-ties, the slots are cut directly in the block of wood which serves as a base for the cross-over. Suitable short sections cut from rail lengths are set in the slots by the glue and muslin method.

Another drawing illustrates a switch. This is different from the ordinary railroad switch. But there’s a reason; chiefly because the shape of the rails of the miniature railroad will not readily permit tapering them off to a point. And, too, the third rail offers additional complications in copying truly the “big railroad” switch. But the one illustrated will serve its purpose adequately.

Assuming that the builder has already made cross-overs, and is becoming more adept at handling the material, the construction of the switch will offer no difficulties. The switch is permanently mounted on a piece of 1/4″ board—wood, plyboard or even plaster-board. A 12″ length of straight track is made up with only three cross-ties. One end of this track is secured rigidly to the base board. The other end can be sprung the fraction of an inch necessary to bring it in line with the other track. The drawing shows a little lever which actuates the switch from a remote point by pulling on a cord. When the cord is released, the switch returns to its “straight away track” position.

No railroad would be complete without bridges. Probably a suspension bridge intrigues the mind more than any other. The suspension bridge shown not only looks like one, but is a truly suspended bridge, embodying many of the factors—except provision for expansion—that are found in an “honest to goodness” bridge.