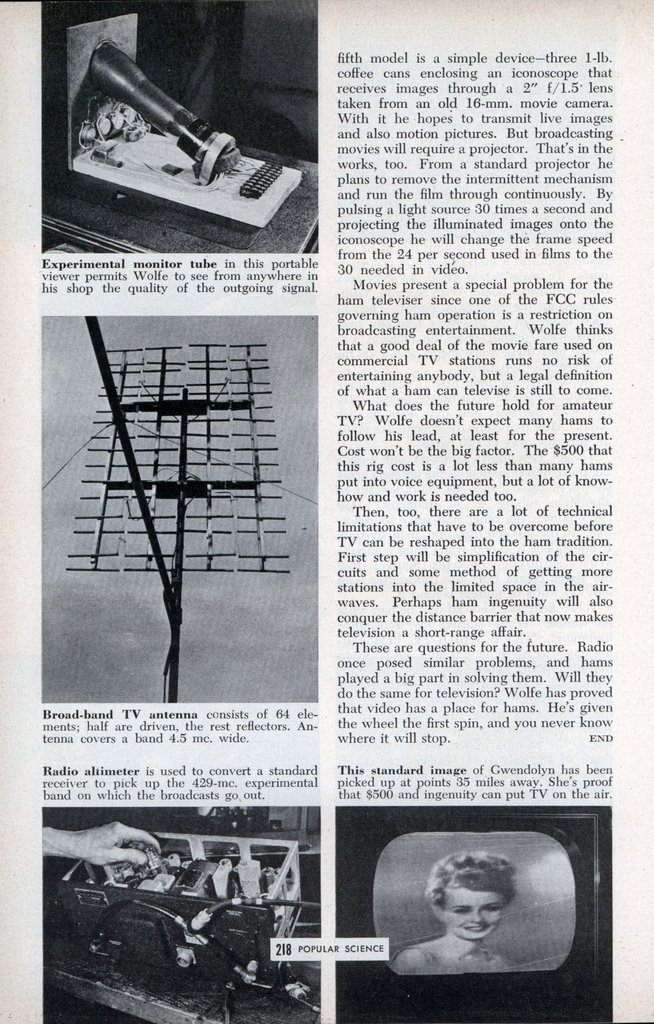 For over a year the 35-year-old amateur has been broadcasting Gwendolyns picture from Burlingame, Calif., to demonstrate that his homemade $500 TV outfit can compete with commercial stations. His R.M.A. signal â€”meaning a standard TV image that meets rigid standards laid down by the Radio Manufacturers Associationâ€”was flying into the winds six months before the first commercial telecaster went on the air in nearby San Francisco.

Not many have seen Gwendolyn yet. She is an image of 525 interlaced lines per picture and 30 pictures a second. The thing that keeps her audience down to a select few is that she travels around in the 429-mc. band, reserved by the Federal Communications Commission for amateur experimental work. Standard home receivers, tuned for the commercial bands between 50 and 200 mc, must use converters to receive ham TV. To hams that’s only a minor problem. There are a number of war-surplus radio altimeters that will step down the frequency properly.

Gwendolyn is the chief store-bought item in Wolfe’s setup. She is a photograph of an unknown girl pasted inside a monoscopeâ€” a tube built to send a single image. Unlike the iconoscope or camera tube which scans any picture or scene, a monoscope sees only the photo bottled within it.

Two years were spent building the transmitter, but before that Wolfe spent 22 years building the experience that went into it. He became a radio bug in 1925 when he was 11 years old. In the following years he started a one-man radio service and repair shop in his home town, won his ham license (1932), and began seriously to study radio. Soon after he built the Burlingame police department’s first two-way radio system.

During the war he taught radio and radar, and later installed delicate fire-control apparatus. On returning to his store after the war he started learning the ways of television, and decided to become the first ham on the air with a standard TV picture. Unable to buy expensive commercial equipment, he set about building and adapting what he had or what he could get cheaply. For help he turned to a ham friend, Leslie Seabold, an airline radio engineer.

No well-equipped laboratory awaited his experiments. He had a few pieces of test equipment and a shop-full of odd and spare parts. To make a test panel, he screwed a few sockets to a board. With Seabold, Wolfe worked out the circuits on paper. Then he tried them out in practice. Literally hundreds were tested; only the efficient survived, and these were incorporated in the final sending apparatus.

He tackled the timer first. Twenty modifications came and went before he was satisfied with the neat unit that does the job today. After that came the control assembly, an intricate array of 120 tubes.

To get Gwendolyn’s picture out with a big push, Wolfe settled on the antenna array shown in these pagesâ€”64 short lengths of aluminum tubing 1″ in diameter. Half carry power, the other half serve as reflectors. In the favored direction, field strength is equivalent to 5,000 watts from a dipole. What’s surprising about this figure is that the signal comes from the transmitter with only 50 watts of muscle behind it.

When field tests showed that he had what he wanted, Wolfe started his transmitter humming. “This is W6JDI-TV, broadcasting image of a girl on 429 mc,” he said into the microphone suspended above his battered desk. “Do you see her?” For several months he received no response. Except for the hams who picked up the pictureless voice, no one knew an amateur was putting out a TV picture. Then a few, eager to share in the adventure, hooked up radio altimeters to. their television receivers. Six months after Wolfe went on the air, Bob Melvin, of Berkeley, answered: “Gwendolyn coming in clear and beautiful.”

Incidentally, Melvin caught the bug shortly afterward and built a transmitter of his own in the family garage.

Wolfe now is trying to perfect a camera to replace his single-image monoscope. His fifth model is a simple deviceâ€”three 1-lb. coffee cans enclosing an iconoscope that receives images through a 2″ f/1.5′ lens taken from an old 16-mm. movie camera. With it he hopes to transmit live images and also motion pictures. But broadcasting movies will require a projector. That’s in the works, too. From a standard projector he plans to remove the intermittent mechanism and run the film through continuously. By pulsing a light source 30 times a second and projecting the illuminated images onto the iconoscope he will change the frame speed from the 24 per second used in films to the 30 needed in video.

Movies present a special problem for the ham televiser since one of the FCC rules governing ham operation is a restriction on broadcasting entertainment. Wolfe thinks that a good deal of the movie fare used on commercial TV stations runs no risk of entertaining anybody, but a legal definition of what a ham can televise is still to come.

What does the future hold for amateur TV? Wolfe doesn’t expect many hams to follow his lead, at least for the present. Cost won’t be the big factor. The $500 that this rig cost is a lot less than many hams put into voice equipment, but a lot of know-how and work is needed too.

Then, too, there are a lot of technical limitations that have to be overcome before TV can be reshaped into the ham tradition. First step will be simplification of the circuits and some method of getting more stations into the limited space in the airwaves. Perhaps ham ingenuity will also conquer the distance barrier that now makes television a short-range affair.

These are questions for the future. Radio once posed similar problems, and hams played a big part in solving them. Will they do the same for television? Wolfe has proved that video has a place for hams. He’s given the wheel the first spin, and you never know where it will stop.