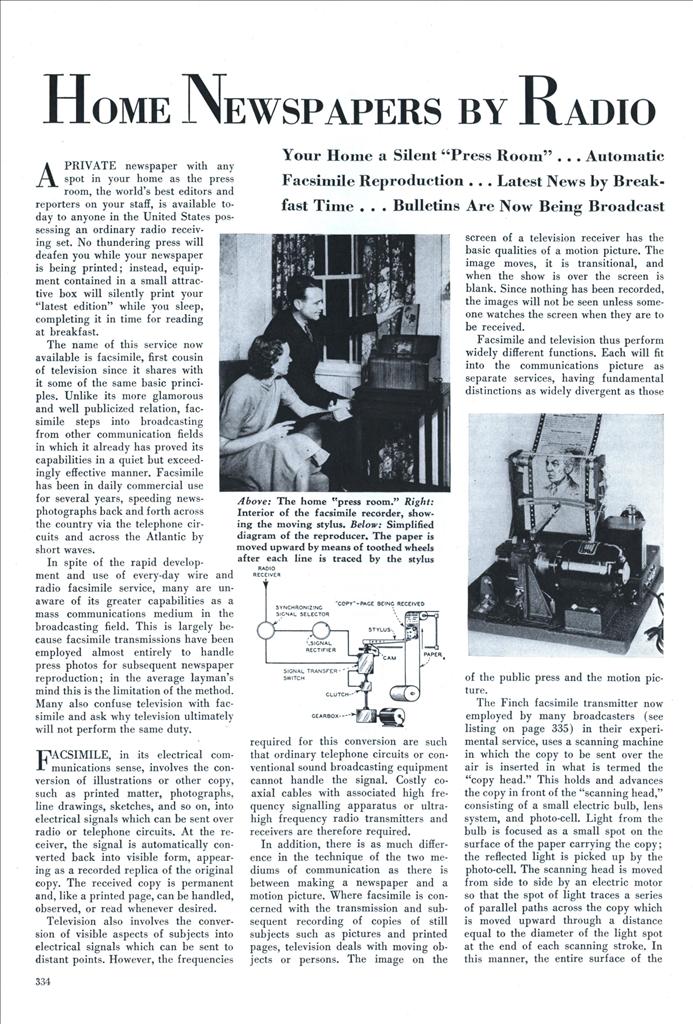 A PRIVATE newspaper with any spot in your home as the press room, the world’s best editors and reporters on your staff, is available today to anyone in the United States possessing an ordinary radio receiving set. No thundering press will deafen you while your newspaper is being printed; instead, equipment contained in a small attractive box will silently print your “latest edition” while you sleep, completing it in time for reading at breakfast.

The name of this service now available is facsimile, first cousin of television since it shares with it some of the same basic principles. Unlike its more glamorous and well publicized relation, facsimile steps into broadcasting from other communication fields in which it already has proved its capabilities in a quiet but exceedingly effective manner. Facsimile has been in daily commercial use for several years, speeding news-photographs back and forth across the country via the telephone circuits and across the Atlantic by short waves.

In spite of the rapid development and use of every-day wire and radio facsimile service, many are unaware of its greater capabilities as a mass communications medium in the broadcasting field. This is largely because facsimile transmissions have been employed almost entirely to handle press photos for subsequent newspaper reproduction; in the average layman’s mind this is the limitation of the method. Many also confuse television with facsimile and ask why television ultimately will not perform the same duty.

FACSIMILE, in its electrical communications sense, involves the conversion of illustrations or other copy, such as printed matter, photographs, line drawings, sketches, and so on, into electrical signals which can be sent over radio or telephone circuits. At the receiver, the signal is automatically converted back into visible form, appearing as a recorded replica of the original copy. The received copy is permanent and, like a printed page, can be handled, observed, or read whenever desired.

Television also involves the conversion of visible aspects of subjects into electrical signals which can be sent to distant points. However, the frequencies required for this conversion are such that ordinary telephone circuits or conventional sound broadcasting equipment cannot handle the signal. Costly coaxial cables with associated high frequency signalling apparatus or ultrahigh frequency radio transmitters and receivers are therefore required.

In addition, there is as much difference in the technique of the two mediums of communication as there is between making a newspaper and a motion picture. Where facsimile is concerned with the transmission and subsequent recording of copies of still subjects such as pictures and printed pages, television deals with moving objects or persons. The image on the screen of a television receiver has the basic qualities of a motion picture. The image moves, it is transitional, and when the show is over the screen is blank. Since nothing has been recorded, the images will not be seen unless someone watches the screen when they are to be received.

Facsimile and television thus perform widely different functions. Each will fit into the communications picture as separate services, having fundamental distinctions as widely divergent as those of the public press and the motion picture.

The Finch facsimile transmitter now employed by many broadcasters (see listing on page 335) in their experimental service, uses a scanning machine in which the copy to be sent over the air is inserted in what is termed the “copy head.” This holds and advances the copy in front of the “scanning head,” consisting of a small electric bulb, lens system, and photo-cell. Light from the bulb is focused as a small spot on the surface of the paper carrying the copy; the reflected light is picked up by the photo-cell. The scanning head is moved from side to side by an electric motor so that the spot of light traces a series of parallel paths across the copy which is moved upward through a distance equal to the diameter of the light spot at the end of each scanning stroke. In this manner, the entire surface of the paper is scanned, line by line; the black, halftone, and white areas reflect to the photo-cell varying amounts of light ranging from minimum to maximum. These variations in reflected light effect a change in the amount of current flowing through the photo-cell. This current is fed to the radio transmitter in the same manner as sound broadcast signals are handled. Any conventional receiver tuned to the frequency of the transmitter will then pick up the signals which may be rendered audible by a loudspeaker, or used to operate a “home” facsimile recorder.

The recorders now in use are self-synchronizing. This is an important advantage; the recorder may be located in one state and the transmitter in another—the system does not depend upon local power lines for synchronization. Recorders are available for a.c. or d.c. operation, or for battery supply for farm use.

THE recording machine is similar in many ways to the scanning instrument. What is termed a “receiving copy head” holds the dry processed recording paper, which is fed as a continuous strip two newspaper columns wide from a roll carried in the lower part of the machine. A recording stylus is moved by a small electric motor from side to side across the surface of the paper, forming marks on the paper corresponding in position and shade to the elements of the copy at the transmitter. When the incoming signal is strongest the line traced by the passage of current is darkest; when it is weakest no mark is made. At the end of each of these recording strokes the paper is moved up by an amount equal to the width of each line element. By means of extremely short low-tone signal impulses sent out by the transmitter just before the start of each recording stroke, and by the use of a small motor turning over at a predetermined speed, the recording stylus moves across the paper in step with the scanning head of the transmitter, recording copy in its proper position. In this manner the recorded copy is built up line by line to appear as a duplicate of the original. One hundred lines will build an inch of reproduced copy; at the operating speed of the present machine, a two column newspaper will be “printed” at the rate of five feet per hour. It is not impractical to hope for a newspaper of five columns in the near future—tabloid size.

The actual home recording machine, which, it is claimed, can be made to sell for less than $50 in mass production, is small enough to be housed as a complete unit in a cabinet approximately a foot square. It may be connected without auxiliary amplifying equipment to the output circuit of any broadcast receiver having a power rating of three watts or more. In operation the broadcasting station from which facsimile signals are sent is tuned in with a receiver as would be the case if regular sound programs were to be received. The loudspeaker is switched off and the facsimile recorder is switched on; the volume control of the receiver is turned to the point where copy has the desired contrast. The resulting recording operation is wholly automatic and requires no attention. Paper costs will be about 15 cents per week.

Until the development of an automatic machine and inexpensive dry recording paper of wide latitude which requires no liquids for moistening or smudgy carbon transfers for printing, the adaptation of facsimile recording methods to home service seemed rather remote. Concentration on the automatic recording problem has resulted in the present-day home facsimile machine which safely operates without attention throughout long facsimile broadcasting periods.

During the present experimental period—and probably thereafter—facsimile broadcasts take place between midnight and 6 a.m. when sound broadcasting facilities are ordinarily idle. Time clocks will turn the radio receiver and recording motor on and off at specified hours. “Printing” of illustrated world events, bulletins with latest news flashes, photographs, market reports, weather maps, cartoons, recipes, and illustrated advertisements of all sorts, will thus be effected in homes while their occupants sleep, the machine being practically silent and entirely automatic in its operation.

THIS, to some who are not familiar with facsimile developments, may sound like one of H. G. Wells’ prophecies. That it is not, is attested by the fact that at the present many of the leading major broadcasting stations in the country already have been granted FCC permits and have inaugurated such a service using regular broadcasting frequencies and full power in experimental transmissions to determine public reaction and to obtain basic engineering data for home facsimile services. In addition, other important stations have applied to the FCC and are considering the possibilities of facsimile service.