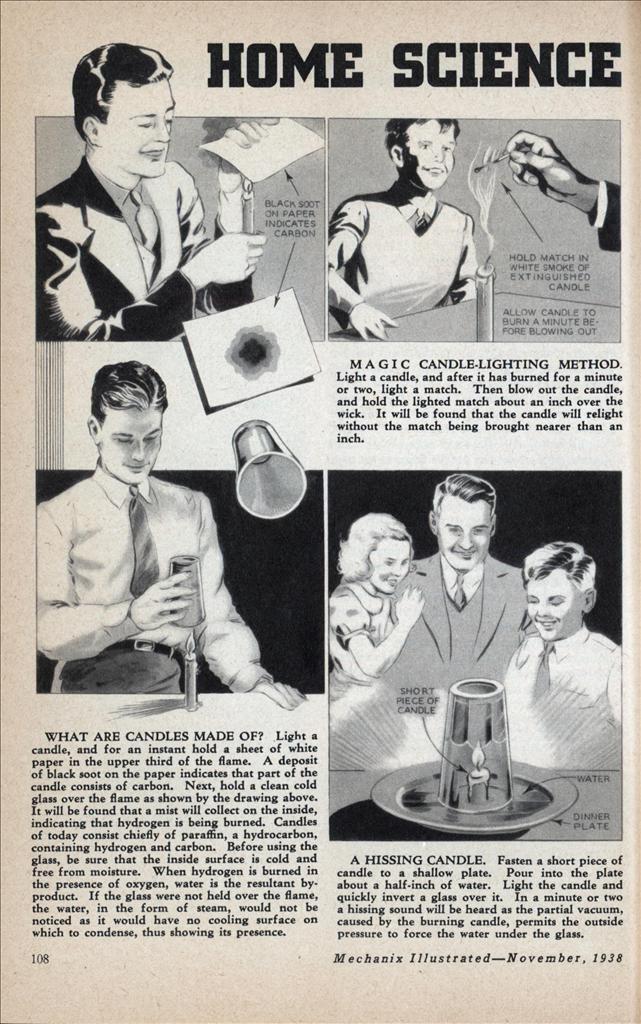 WHAT ARE CANDLES MADE OF? Light a candle, and for an instant hold a sheet of white paper in the upper third of the flame. A deposit of black soot on the paper indicates that part of the candle consists of carbon. Next, hold a clean cold glass over the flame as shown by the drawing above. It will be found that a mist will collect on the inside, indicating that hydrogen is being burned. Candles of today consist chiefly of paraffin, a hydrocarbon, containing hydrogen and carbon. Before using the glass, be sure that the inside surface is cold and free from moisture. When hydrogen is burned in the presence of oxygen, water is the resultant byproduct. If the glass were not held over the flame, the water, in the form of steam, would not be noticed as it would have no cooling surface on which to condense, thus showing its presence.

MAGIC CANDLE-LIGHTING METHOD. Light a candle, and after it has burned for a minute or two, light a match. Then blow out the candle, and hold the lighted match about an inch over the wick. It will be found that the candle will relight without the match being brought nearer than an inch.

A HISSING CANDLE. Fasten a short piece of candle to a shallow plate. Pour into the plate about a half-inch of water. Light the candle and quickly invert a glass over it. In a minute or two a hissing sound will be heard as the partial vacuum, caused by the burning candle, permits the outside pressure to force the water under the glass.

MAKING PERMANENT FINGERPRINTS. Light an ordinary candle and allow a small pool of wax to form in a saucer. While the wax is still in a liquid state, place a finger into it and hold it there until the wax starts to harden. Remove the finger and pour some cold water over the wax. An excellent permanent mould will be the result.

A SWIMMING SNAKE. Soak a short piece of cord in molten candle grease. When it is uniformly coated, press into one end a short piece of iron wire. Then place the cord into a pan of water, and by holding a magnet near the end into which the wire was placed, it will follow the magnet, swimming like a snake.

HOW MUCH CANDLE POWER HAS A MATCH? Hold a lighted match behind a grease spot on a piece of paper. Then stand a small lighted candle behind the paper, the same distance away as the match. Compare the brilliance of the light through the spot with the candle and the match. The number of candles required to give the same illumination as the match is the candle power of the match.

OLD FASHIONED MATCHES. Soak several pieces of soft wood in candle grease, with the exception of about one-half inch at one end. Then dip the “head end” into some powdered sulphur. When this is lighted, notice how it burns with a smooth and steady flame.