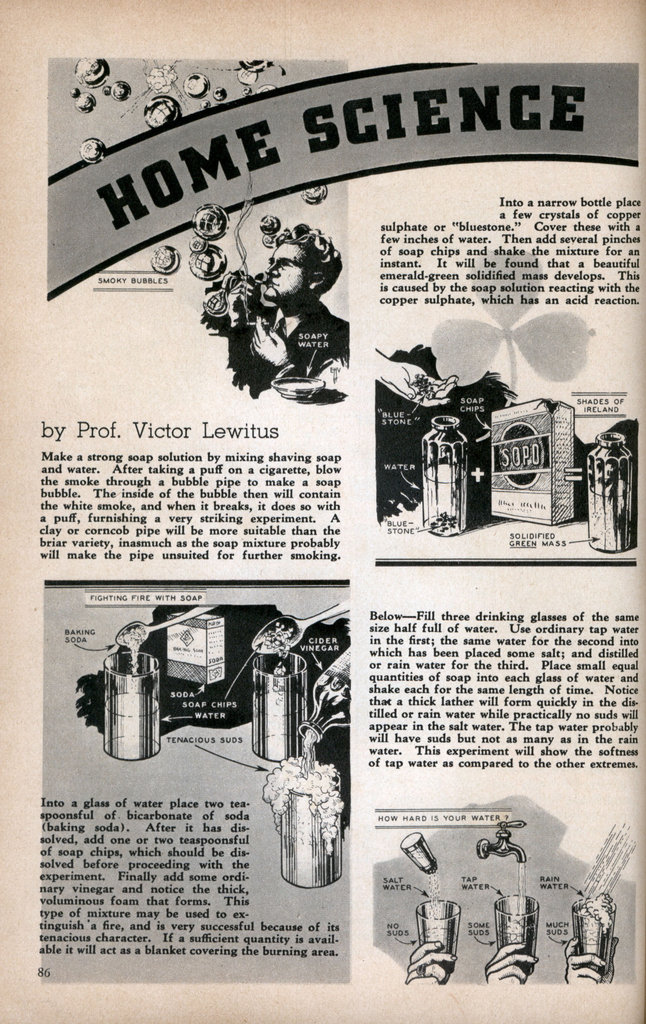 Make a strong soap solution by mixing shaving soap and water. After taking a puff on a cigarette, blow the smoke through a bubble pipe to make a soap bubble. The inside of the bubble then will contain the white smoke, and when it breaks, it does so with a puff, furnishing a very striking experiment. A clay or corncob pipe will be more suitable than the briar variety, inasmuch as the soap mixture probably will make the pipe unsuited for further smoking.

Into a glass of water place two tea-spoonsful of bicarbonate of soda (baking soda). After it has dissolved, add one or two teaspoonsful of soap chips, which should be dissolved before proceeding with the experiment. Finally add some ordinary vinegar and notice the thick, voluminous foam that forms. This type of mixture may be used to extinguish a fire, and is very successful because of its tenacious character. If a sufficient quantity is available it will act as a blanket covering the burning area.

Into a narrow bottle place a few crystals of copper sulphate or “bluestone.” Cover these with a few inches of water. Then add several pinches of soap chips and shake the mixture for an instant. It will be found that a beautiful emerald-green solidified mass develops. This is caused by the soap solution reacting with the copper sulphate, which has an acid reaction.

Belowâ€”Fill three drinking glasses of the same size half full of water. Use ordinary tap water in the first; the same water for the second into which has been placed some salt; and distilled or rain water for the third. Place small equal quantities of soap into each glass of water and shake each for the same length of time. Notice that a thick lather will form quickly in the distilled or rain water while practically no suds will appear in the salt water. The tap water probably will have suds but not as many as in the rain water. This experiment will show the softness of tap water as compared to the other extremes.

Place two quarts of water in each of two pans and add some salt to one of them. Ask someone to wash his hands in the water to which salt has been added. He will find that try as he, will, no lather will form, while if you.

wash in the plain water, an abundance of lather will be obtained.

This burn-aid soap will be found to be a very useful preparation to have on hand in the home at all times. Children particularly are subject to many minor burns, and because of the pink color of the material, they probably will have no objections to having it applied when necessary. Into a glass vessel pour three ounces of lime water (obtainable at the drug store). Add to this, with constant stirring, linseed oil until you have incorporated three ounces. Mix thoroughly by shaking, in a six- or eight-ounce bottle. During the shaking, the material will turn to a milky-appearing substance. To this add about ten drops of mercurochrome solution (obtainable at the drug store). This last addition

will turn the solution a pink color. These simple experiments will be found interesting and simple for the amateur chemist, and give to the experimenter a broader knowledge of soapâ€”one of the most common and useful things in life. While in continual use by every person, few understand its workings other than for washing purposes.