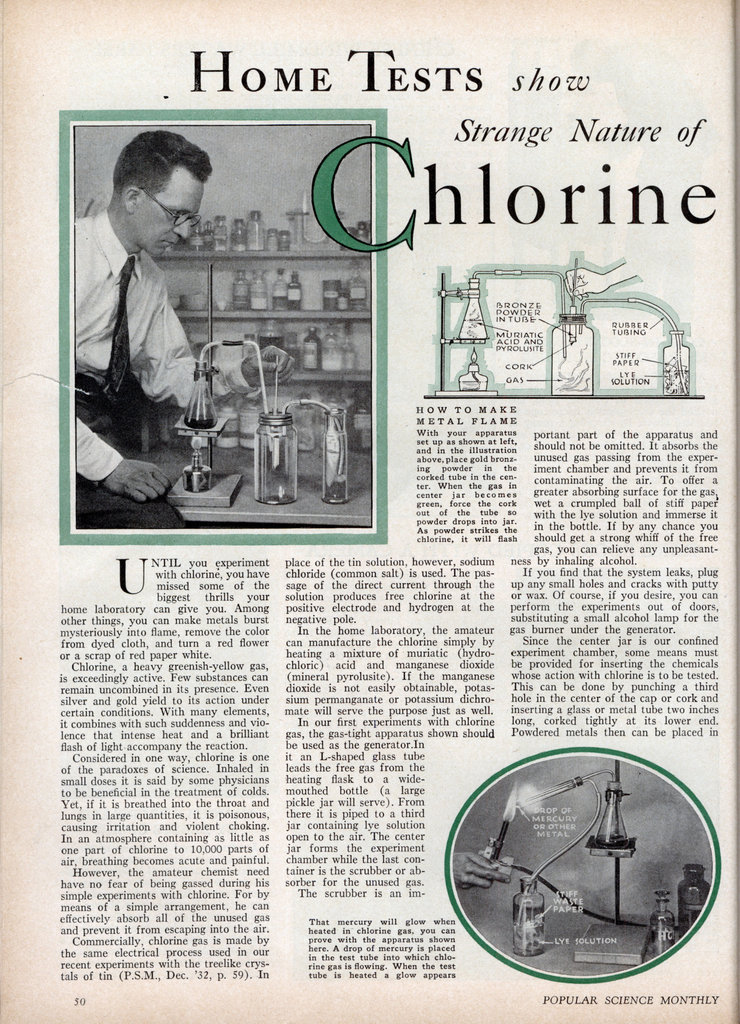 How to Make Metals Flame and Why Red Flowers Turn White is Explained Here
By RAYMOND B. WAILES

UNTIL you experiment with chlorine, you have missed some of the biggest thrills your home laboratory can give you. Among other things, you can make metals burst mysteriously into flame, remove the color from dyed cloth, and turn a red flower or a scrap of red paper white.

Chlorine, a heavy greenish-yellow gas, is exceedingly active. Few substances can remain uncombined in its presence. Even silver and gold yield to its action under certain conditions. With many elements, it combines with such suddenness and violence that intense heat and a brilliant flash of light accompany the reaction.

Considered in one way, chlorine is one of the paradoxes of science. Inhaled in small doses it is said by some physicians to be beneficial in the treatment of colds. Yet, if it is breathed into the throat and lungs in large quantities, it is poisonous, causing irritation and violent choking. In an atmosphere containing as little as one part of chlorine to 10,000 parts of air, breathing becomes acute and painful.

However, the amateur chemist need have no fear of being gassed during his simple experiments with chlorine. For by means of a simple arrangement, he can effectively absorb all of the unused gas and prevent it from escaping into the air.

Commercially, chlorine gas is made by the same electrical process used in our recent experiments with the treelike crystals of tin (P.S.M., Dec. ’32, p. 59). In place of the tin solution, however, sodium chloride (common salt) is used. The passage of the direct current through the solution produces free chlorine at the positive electrode and hydrogen at the negative pole.

In the home laboratory, the amateur can manufacture the chlorine simply by heating a mixture of muriatic (hydrochloric) acid and manganese dioxide (mineral pyrolusite). If the manganese dioxide is not easily obtainable, potassium permanganate or potassium dichro-mate will serve the purpose just as well.

In our first experiments with chlorine gas, the gas-tight apparatus shown should be used as the generator. In it an L-shaped glass tube leads the free gas from the heating flask to a wide-mouthed bottle (a large pickle jar will serve). From there it is piped to a third jar containing lye solution open to the air. The center jar forms the experiment chamber while the last container is the scrubber or absorber for the unused gas.

The scrubber is an important part of the apparatus and should not be omitted. It absorbs the unused gas passing from the experiment chamber and prevents it from contaminating the air. To offer a greater absorbing surface for the gas wet a crumpled ball of stiff paper with the lye solution and immerse it in the bottle. If by any chance you should get a strong whiff of the free gas, you can relieve any unpleasantness by inhaling alcohol.

If you find that the system leaks, plug up any small holes and cracks with putty or wax. Of course, if you desire, you can perform the experiments out of doors, substituting a small alcohol lamp for the gas burner under the generator.

Since the center jar is our confined experiment chamber, some means must be provided for inserting the chemicals whose action with chlorine is to be tested. This can be done by punching a third hole in the center of the cap or cork and inserting a glass or metal tube two inches long, corked tightly at its lower end. Powdered metals then can be placed in the tube and the cork pushed out when the chamber has filled with chlorine.

We can try out our apparatus by placing some “gold” bronzing powder in the entry tube. Heat the mixture in the flask to generate the gas and as soon as the center bottle takes on a greenish color, showing that it is filled with chlorine, push down on the metallic powder and force the stopper out of the short tube. As the powder drops into the jar and combines with the chlorine, it will flash vividly.

Using this same apparatus try other metals in powdered form. In the case of brass, you may find that it will not burn violently in combining, but you will know that a reaction is taking place by the fact that the powder will turn green.

Some metals will not combine with chlorine at ordinary temperatures. Mercury and copper foil are excellent examples of this type. You can demonstrate this by piping the chlorine direct from the heating flask to the lower end of a test tube containing a drop of mercury. The chlorine and mercury will combine only when the base of the tube is heated. When the proper temperature is reached, the mercury will vaporize and a soft blue glow will appear at the end of the entrance tube. In effect, it will appear as if the gas is burning as it issues from the tube. As the process continues, the walls of the test tube will become coated with crystals of mercuric chloride, a poisonous corrosive sublimate. Similar reactions will occur when other metals are used.

In this experiment it is also important to arrange some means of absorbing the unused chlorine gas. This can be done by providing the test tube with a rubber stopper containing two short tubes, one going to the heating flask and the other to a scrubbing bottle filled with the lye solution and crumpled paper.

Like many of the other gases, chlorine is particularly soluble in water. It dissolves readily to form chlorine water, a mixture of hydrochloric and hypochlorous acids. Both chlorine and chlorine water show a useful property in their ability to bleach the color from certain dyes. The red portion of an empty match box, for instance, can be bleached simply by immersing it in chlorine water or by inserting it wet in a closed beaker of the gas.

In reality, the bleaching property of chlorine and chlorine water is not due to the chlorine but to the oxygen liberated from the hypochlorous acid. The oxygen oxidizes the coloring matter and changes its structure. This same action makes chlorine valuable as a purifying agent for water.

Bleaching powder, an important industrial chemical, can be made easily in the home laboratory by passing chlorine gas over moist lime (calcium hydroxide). To do this, the amateur can make up a simple piece of apparatus from odd bottles, corks, and tubing. Our old friend, the bottomless olive bottle also comes back into use as the reaction chamber.

The chlorine gas generated in a flask is piped first to a bottle of water, which serves as a scrubber to remove any hydrochloric acid gas mixed with the chlorine, and then to one end of the olive bottle. Pack the olive bottle with moist lime, mount it horizontally, and fit it with corks. The exit end of the reaction chamber should lead to the lye solution scrubber or absorber.

To perform the experiment, simply heat the generator flask. The chlorine evolved will bubble through the water bottle and pass over the lime. Some of the chlorine will dissolve in the water but soon the saturation point will be reached and the gas will pass on to the reaction tube and the moist lime.

Continue to heat the mixture in the generating flask until the greenish-yellow vapor disappears entirely. This will mean that all of the chlorine gas has been driven off. The chemical remaining in the horizontal tube will be bleaching powder.

Mixed with water to form a paste, it can be used as a good bleaching agent for certain dyed fab-brics and flowers. By adding muriatic or sulphuric acid to it, you can produce chlorineâ€”an excellent way for the amateur to obtain the gas in his future experiments Bleaching powder also can be obtained in a prepared form at most drug and grocery stores, generally under the misnomer of “chloride of lime.”

MANY organic substances can be made to react with chlorine. For example, drops of warm turpentine on a piece of paper immersed in a bottle of the gas will take fire spontaneously and produce large quantities of soot. A lighted candle and even a small gas flame placed in chlorine behave in a similar manner, but will soon be extinguished.

When carbon combines with chlorine, the very useful chemical carbon tetrachloride is formed. This is the liquid used in many types of fire extinguishers and also as a cleaning fluid for clothes and fabrics.

Using a small amount of carbon tetrachloride, the home chemist can perform an interesting and instructive experiment. Place some of the liquid in a flask, warm it gently, and pass the vapors given off into a glass tube containing hot lead peroxide. The brown lead compound soon changes outwardly, the oxygen in the peroxide switching places with the chlorine in the carbon tetrachloride to form white lead chloride and gaseous carbon dioxide. This exchange of elements is what is known as double decomposition.

The white lead chloride remaining in the tube can be dissolved from the rest of the residue by washing it in hot water. Then by filtering and evaporating the liquid, the amateur can obtain the lead chloride for future use in his home experiments.