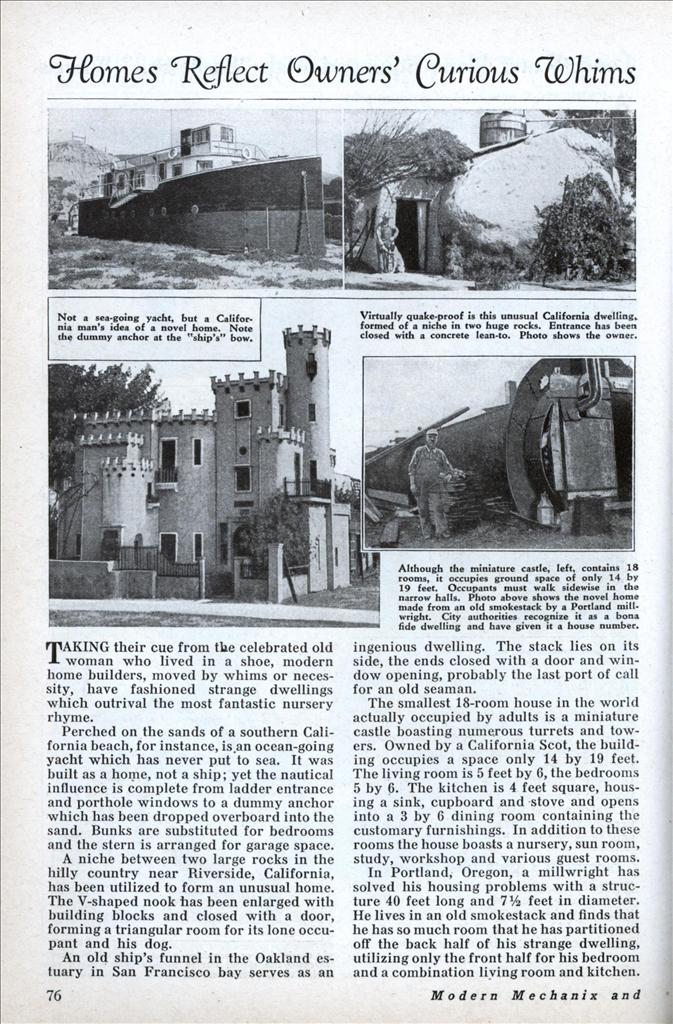 TAKING their cue from the celebrated old woman who lived in a shoe, modern home builders, moved by whims or necessity, have fashioned strange dwellings which outrival the most fantastic nursery rhyme.

Perched on the sands of a southern California beach, for instance, is an ocean-going yacht which has never put to sea. It was built as a home, not a ship; yet the nautical influence is complete from ladder entrance and porthole windows to a dummy anchor which has been dropped overboard into the sand. Bunks are substituted for bedrooms and the stern is arranged for garage space.

A niche between two large rocks in the hilly country near Riverside, California, has been utilized to form an unusual home. The V-shaped nook has been enlarged with building blocks and closed with a door, forming a triangular room for its lone occupant and his dog.

An old ship’s funnel in the Oakland estuary in San Francisco bay serves as an ingenious dwelling. The stack lies on its side, the ends closed with a door and window opening, probably the last port of call for an old seaman.

The smallest 18-room house in the world actually occupied by adults is a miniature castle boasting numerous turrets and towers. Owned by a California Scot, the building occupies a space only 14 by 19 feet. The living room is 5 feet by 6, the bedrooms 5 by 6. The kitchen is 4 feet square, housing a sink, cupboard and stove and opens into a 3 by 6 dining room containing the customary furnishings. In addition to these rooms the house boasts a nursery, sun room, study, workshop and various guest rooms.

In Portland, Oregon, a millwright has solved his housing problems with a structure 40 feet long and 7-1/2 feet in diameter. He lives in an old smokestack and finds that he has so much room that he has partitioned off the back half of his strange dwelling, utilizing only the front half for his bedroom and a combination living room and kitchen.