Honey in Water Is a New Efficient Anti-freeze Solution (Jan, 1930) 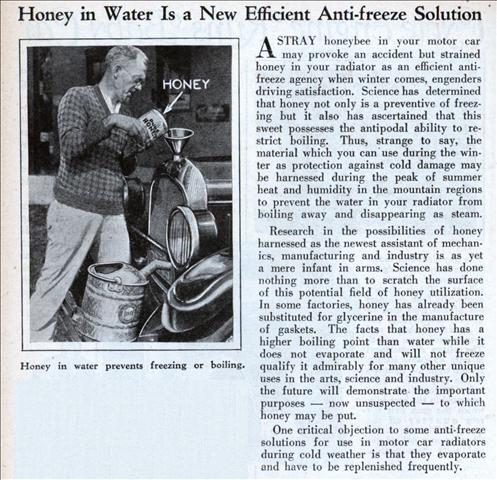 Honey in Water Is a New Efficient Anti-freeze Solution

A STRAY honeybee in your motor car may provoke an accident but strained honey in your radiator as an efficient antifreeze agency when winter comes, engenders driving satisfaction. Science has determined that honey not only is a preventive of freezing but it also has ascertained that this sweet possesses the antipodal ability to restrict boiling. Thus, strange to say, the material which you can use during the winter as protection against cold damage may be harnessed during the peak of summer heat and humidity in the mountain regions to prevent the water in your radiator from boiling away and disappearing as steam.

Research in the possibilities of honey harnessed as the newest assistant of mechanics, manufacturing and industry is as yet a mere infant in arms. Science has done nothing more than to scratch the surface of this potential field of honey utilization. In some factories, honey has already been substituted for glycerine in the manufacture of gaskets. The facts that honey has a higher boiling point than water while it does not evaporate and will not freeze qualify it admirably for many other unique uses in the arts, science and industry. Only the future will demonstrate the important purposes — now unsuspected — to which honey may be put.

One critical objection to some anti-freeze solutions for use in motor car radiators during cold weather is that they evaporate and have to be replenished frequently.