Here is a really cute pictorial about all of the fun activities you can participate in while taking a voyage across the Atlantic. It’s interesting to note that for all of the supposed competition between liners to entertain their passengers, all of the activities and facilities seem like afterthoughts. They obviously designed and built the ship, then decided where to put the shuffle board court or where to string up the canvas tank to make an ad hoc pool. It’s an interesting contrast to the enormous floating entertainment factories that prowl the oceans today. 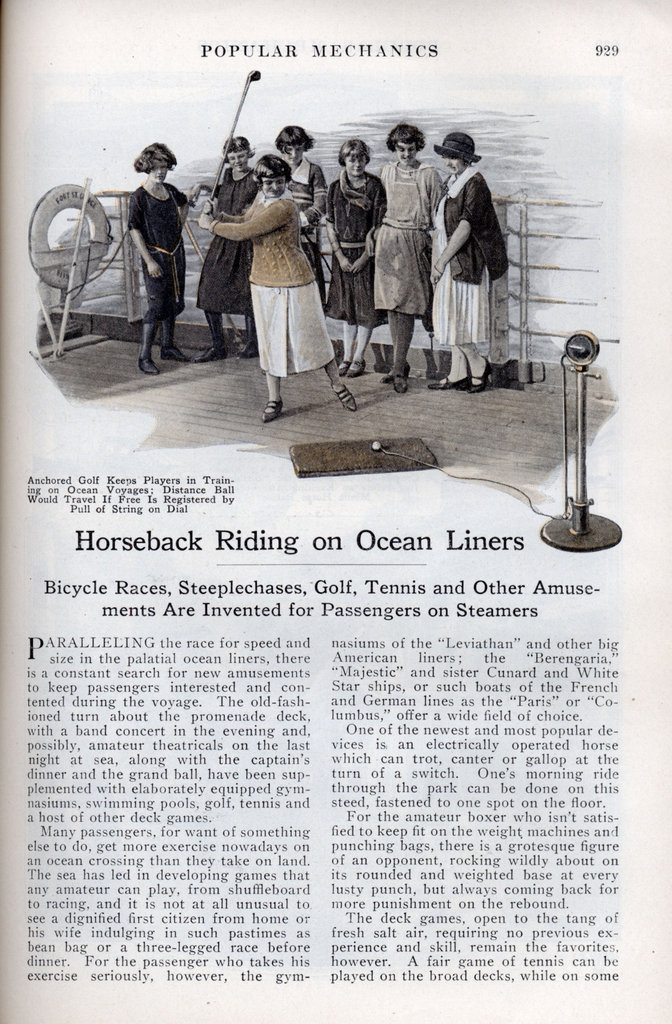 Bicycle Races, Steeplechases, Golf, Tennis and Other Amusements Are Invented for Passengers on Steamers

PARALLELING the race for speed and size in the palatial ocean liners, there is a constant search for new amusements to keep passengers interested and contented during the voyage. The old-fashioned turn about the promenade deck, with a band concert in the evening and, possibly, amateur theatricals on the last night at sea, along with the captain’s dinner and the grand ball, have been supplemented with elaborately equipped gymnasiums, swimming pools, golf, tennis and a host of other deck games.

Many passengers, for want of something else to do, get more exercise nowadays on an ocean crossing than they take on land. The sea has led in developing games that any amateur can play, from shuffleboard to racing, and it is not at all unusual to see a dignified first citizen from home or his wife indulging in such pastimes as bean bag or a three-legged race before dinner. For the passenger who takes his exercise seriously, however, the gymnasiums of the “Leviathan” and other big American liners; the “Berengaria”, “Majestic” and sister Cunard and White Star ships, or such boats of the French and German lines as the “Paris” or “Columbus,” offer a wide field of choice.

One of the newest and most popular devices is an electrically operated horse which can trot, canter or gallop at the turn of a switch. One’s morning ride through the park can be done on this steed, fastened to one spot on the floor.

For the amateur boxer who isn’t satisfied to keep fit on the weight machines and punching bags, there is a grotesque figure of an opponent, rocking wildly about on its rounded and weighted base at every lusty punch, but always coming back for more punishment on the rebound.

The deck games, open to the tang of fresh salt air, requiring no previous experience and skill, remain the favorites, however. A fair game of tennis can be played on the broad decks, while on some liners, particularly on the New York-South American runs, there is an amusing imitation in which rope quoits are used instead of balls and racquets. The net is stretched five feet from the deck and the quoits are tossed across it, to be caught by the opposing player. The rules and scoring are practically the same as in the usual tennis game.

Keeping several hundred passengers amused is a difficult task. On the bigger liners for the comparatively short run across the Atlantic the problem more or less solves itself, but on smaller ships on the longer runs, to South America, Africa and across the Pacific, the problem is more acute. On many of the long-run ships a passengers’ sports committee is organized the first day out to plan masquerade balls, bridge tournaments, deck tennis, golf, shuffleboard, spar boxing and other games.

The special tours, where passengers are together for weeks, or even months, provide social directors with as many as a dozen assistants to a single ship. These social leaders are carefully selected by the tour managers, and must be men of exceptional tact and culture, attractive personalities, capable linguists, well versed in the history of the countries to be visited, and, in addition, shrewd students of human nature.

Besides all the other amusements, there is always the sport of betting in the pool on the vessel’s daily run. This lends zest to the making of new speed records. Racing has been resumed on the Atlantic during the last year, after several years of quiet. The “Leviathan” started it by hanging up a five-day seven-hour and twenty-minute record from Cherbourg to New York after being equipped with oil burners.

The “Mauretania,” veteran of many speed records and sistership of the ill-fated “Lusitania,” came back with a five day, three-hour and twenty-minute mark for the 3,098 miles, and later steamed from . New York to Plymouth in four days, twenty-one hours and fifty-seven minutes.

Racing ships across the ocean has been a popular sport since the “Savannah,” a 350-ton side-wheeler, cleared from Savannah, Ga., May 24, 1819, and docked at Liverpool twenty-six days laterâ€”the first steamer to cross the ocean. She carried sails as well as steam; in fact, sails did not entirely disappear from liners until about thirty years ago.