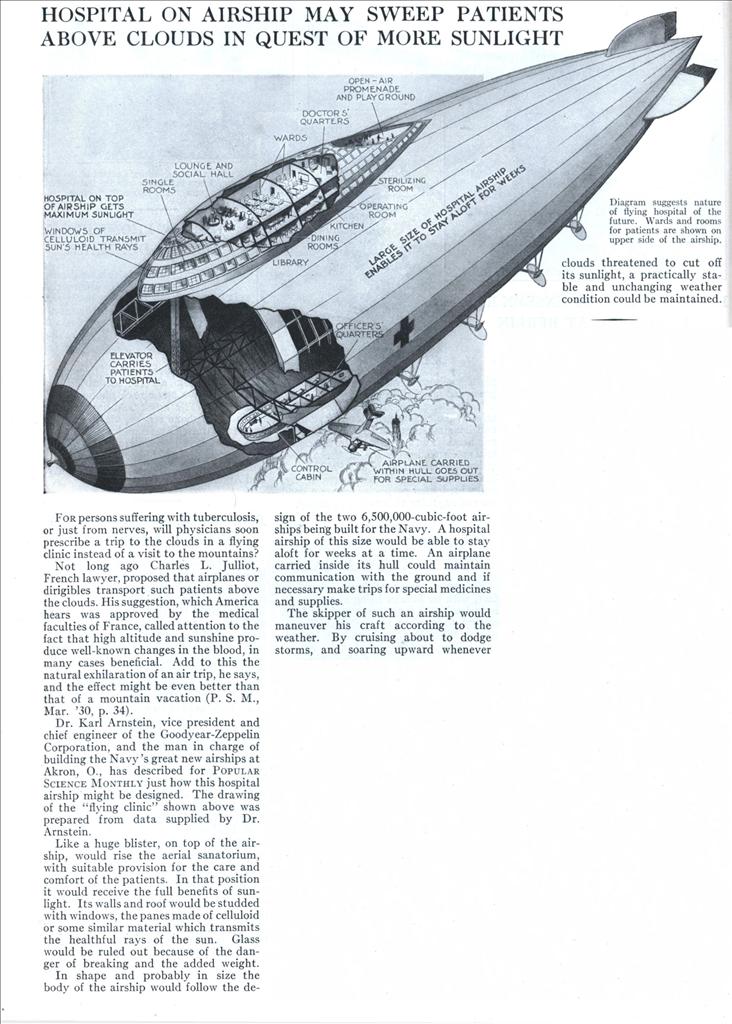 Not long ago Charles L. Julliot, French lawyer, proposed that airplanes or dirigibles transport such patients above the clouds. His suggestion, which America hears was approved by the medical faculties of France, called attention to the fact that high altitude and sunshine produce well-known changes in the blood, in many cases beneficial. Add to this the natural exhilaration of an air trip, he says, and the effect might be even better than that of a mountain vacation (P.S.M., Mar. ’30, p. 34).

Dr. Karl Arnstein, vice president and chief engineer of the Goodyear-Zeppelin Corporation, and the man in charge of building the Navy’s great new airships at Akron, O., has described for Popular Science Monthly just how this hospital airship might be designed. The drawing of the “flying clinic” shown above was prepared from data supplied by Dr. Arnstein.

Like a huge blister, on top of the airship, would rise the aerial sanatorium, with suitable provision for the care and comfort of the patients. In that position it would receive the full benefits of sunlight. Its walls and roof would be studded with windows, the panes made of celluloid or some similar material which transmits the healthful rays of the sun. Glass would be ruled out because of the danger of breaking and the added weight.

In shape and probably in size the body of the airship would follow the de- sign of the two 6,500,000-cubic-foot airships being built for the Navy. A hospital airship of this size would be able to stay aloft for weeks at a time. An airplane carried inside its hull could maintain communication with the ground and if necessary make trips for special medicines and supplies.

The skipper of such an airship would maneuver his craft according to the weather. By cruising about to dodge storms, and soaring upward whenever clouds threatened to cut off its sunlight, a practically stable and unchanging weather condition could be maintained.