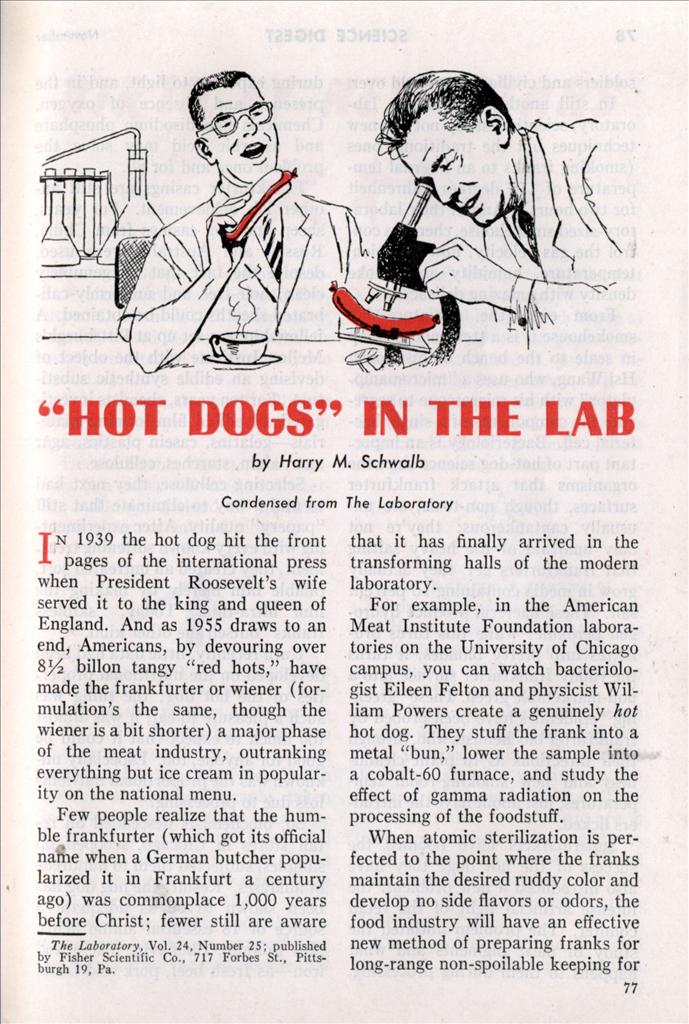 “HOT DOGS” IN THE LAB

Condensed from The Laboratory In 1939 the hot dog hit the front pages of the international press when President Roosevelt’s wife served it to the king and queen of England. And as 1955 draws to an end, Americans, by devouring over 8y2 billon tangy “red hots,” have made the frankfurter or wiener (formulation’s the same, though the wiener is a bit shorter) a major phase of the meat industry, outranking everything but ice cream in popularity on the national menu.

Few people realize that the humble frankfurter (which got its official name when a German butcher popularized it in Frankfurt a century ago) was commonplace 1,000 years before Christ; fewer still are aware that it has finally arrived in the transforming halls of the modern laboratory.

For example, in the American Meat Institute Foundation laboratories on the University of Chicago campus, you can watch bacteriologist Eileen Felton and physicist William Powers create a genuinely hot hot dog. They stuff the frank into a metal “bun,” lower the sample into a cobalt-60 furnace, and study the effect of gamma radiation on the processing of the foodstuff.

When atomic sterilization is perfected to the point where the franks maintain the desired ruddy color and develop no side flavors or odors, the food industry will have an effective new method of preparing franks for long-range non-spoilable keeping for soldiers and civilians the world over.

In still another Foundation laboratory, scientists study not the new techniques but the traditional ones (smoking franks to an internal temperature of 155 degrees Fahrenheit for two hours). And in their laboratory-sized smokehouse, chemists control the gas velocity, flow direction, temperature, humidity and smoke density with amazing delicacy.

From even the miniature lab smokehouse it is a tremendous jump in scale to the bench of histologist Hsi Wang, who uses a “micromanipulator” with his microscope to segregate the components of a single bacterial cell. Bacteriology is an important part of hot-dog science since the organisms that attack frankfurter surfaces, though non-toxic, are unusually cantankerous: they’re not only unafraid of the heavy salting that frankfurters get, they actually grow in media containing 10 percent salt. These bacteria produce hydrogen peroxide; while this turns brunettes into pretty blondes, it turns the ruddy frankfurter surface into a non-marketable green. These “greening” epidemics have been probed by frankfurter biochemists who, through their directions as to plant cleanliness and new smoking-room temperatures, just about have the intruders licked.

Supermarkets have boomed the success of the hot dog; they have also introduced a new problem: the intense artificial light of the retail counter. The problem initiated the study of meat pigments and what happens to them during processing, during exposure to light, and in the presence and absence of oxygen. Chemicals like disodium phosphate and ascorbic acid may solve the problem once and for all.

Frankfurter casings are still another lab achievement. For years, sheep and hog casings from China, Russia, and Australia were used, despite the fact that no genuinely clean, hole-free and uniformly-calibrated sheaths could be obtained. A fellowship was set up at Pittsburgh’s Mellon Institute with the object of devising an edible synthetic substitute. For ten years, chemists investigated all edible film-forming materials—gelatins, casein plastics, agar agar, algin, starches, cellulose.

Selecting cellulose, they next had to find a way to eliminate that stiff “papery” quality. After experimenting with every known softening treatment, they created an untreated soft, pliable film merely by making the film ultra-thin. Today, “skinless franks” outsell the other kind.

Until recently, little data had been developed on the nutritional properties of the hot dog; the thing was such a pleasure to eat, it was- almost too much to expect that it could be good for anyone, too. Especially unknown was the proportional nutrient-loss due to processing.

So, biochemists descended on retail stores in Chicago, scooped up samples, subjected them to hundreds of analyses. Result: the hog dog has been shown to be as adequate a source of 18 essential amino acids, plus thiamin, riboflavin, niacin and iron—as fresh beef, pork and lamb.