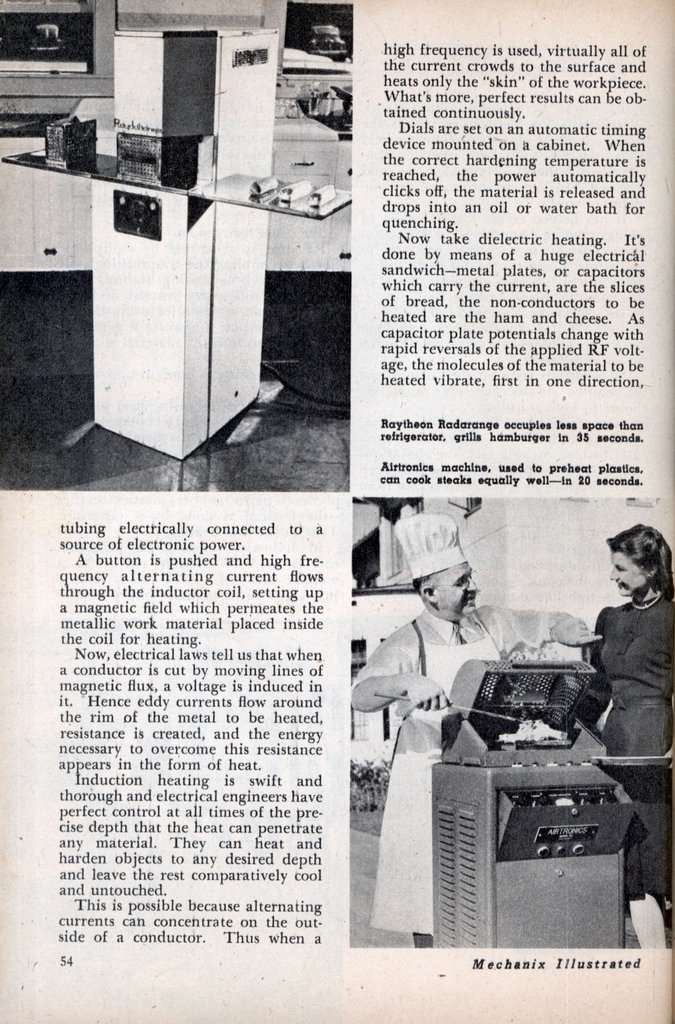 “Where are those P-T boats? For God’s sake get them out here!”

The bottleneck was plywood.

It took 16 hours for slow-heating steam platens to bind together the layers of birch veneer, and the delay resulted in production lags all down the line.

The builders appealed to the scientists. “Give us more heat,” they pleadedâ€””more heat or quicker heat.” And the scientists answered, “Why not try heating by radio frequency?”

Why not, indeed? Radio frequency heating was in its scientific swaddling clothes then, but many a child has grown to swift maturity in war years, so RF was tried.

And RF slashed the total curing time of plywood down to four minutes!

The log-jam was broken and swarms of P-T boats went scuttling out to the Pacificâ€”while back home the RF heating process was vaulted into the front ranks of the industrial big time as manufacturers who wanted “more and quicker heat” harnessed it in their plants.

Industry’s newest wonder boy is the hottest thing in the manufacturing field today. It has stuck out its tongue impudently at hitherto impossible tasks, and proceeded to do them with the calm confidence of youth.

It has helped create a vast variety of things ranging from the slot-machine hot dogâ€”cooked in seconds while you waitâ€”to impelling a near-revolution in all industries in which heat is an integral part of the manufacturing process.

Its achievements are manifold:

Itemâ€”It has cut the bulk reduction time of penicillin solutions from 24 hours to 30 minutes.

Itemâ€”It has reduced the curing time of foamex, rubber mattresses from six hours to four minutes.

Itemâ€”It has made it possible to thaw bulk frozen foods in one and a half minutes instead of 24 hours, thereby allowing bakers and other large users to keep their production schedules flexible from day to day.

Itemâ€”It has created foot-thick plywoodsâ€”as compared with the one-inch ones made the old wayâ€”and the result has the tensile strength of 45,000 pounds per square inch but is only half the weight of the light metal aluminum.

Itemâ€”It has telescoped the drying of rayon thread, formerly done by hot air, from four hours to three minutes. Itemâ€”It has solved the knotty problem of hardening gear surfaces beyond any danger of cracking while allowing the un-heated cores to retain toughness and elasticity.

There are many more.

RF heat is generated by equipment closely resembling the transmitting unit of a radio broadcasting station, with one major difference: instead of being coupled to an antenna for utilization of its power output, the power it generates is fed instead into the material which is to be heated.

All RF heating is done in one of two ways:

If the material requiring heat processing is a good electrical conductor, such as ferrous or non-ferrous metals, the heat is fed through an induction coil. And that’s induction heating.

If the material is a non-conductorâ€” plywood, paper, rubber, plastics, textiles â€”the feeding is done by a capacitor. That’s dielectric heating.

In induction heating an induction coil is used to transfer energy to metallic material. This coil is usually just a few turns of water-cooled copper tubing electrically connected to a source of electronic power.

A button is pushed and high frequency alternating current flows through the inductor coil, setting up a magnetic field which permeates the metallic work material placed inside the coil for heating.

Now, electrical laws tell us that when a conductor is cut by moving lines of magnetic flux, a voltage is induced in it. Hence eddy currents flow around the rim of the metal to be heated, resistance is created, and the energy necessary to overcome this resistance appears in the form of heat.

Induction heating is swift and thorough and electrical engineers have perfect control at all times of the precise depth that the heat can penetrate any material. They can heat and harden objects to any desired depth and leave the rest comparatively cool and untouched.

This is possible because alternating currents can concentrate on the outside of a conductor. Thus when a high frequency is used, virtually all of the current crowds to the surface and heats only the “skin” of the workpiece. What’s more, perfect results can be obtained continuously.

Dials are set on an automatic timing device mounted on a cabinet. When the correct hardening temperature is reached, the power automatically clicks off, the material is released ana drops into an oil or water bath for quenchirig.

Now take dielectric heating. It’s done by means of a huge electrical sandwichâ€”metal plates, or capacitors which carry the current, are the slices of bread, the non-conductors to be heated are the ham and cheese. As capacitor plate potentials change with rapid reversals of the applied RF voltage, the molecules of the material to be heated vibrate, first in one direction, then in the other. This molecular agitation, produces heat.

Thus the higher the applied alternating voltage and the higher its frequency, the more the molecules bounce around and the hotter becomes the filling of the sandwich. Therefore dielectric heating is done in the stratosphere of high frequencies, up in the millions of cycles a second instead of thousands as in induction heating.

Dielectric heating spreads heat evenly throughout the substance. There is no spottiness, no burning of the outside while the inside remains raw, and this is vital in plastic moulding, plywood binding, textile drying and rubber curing. The result is flawlessly uniform because the molecules in the center of the material being heated are shaken back and forth by the alternating current just as hard and fast as those on the outside.

Just as uniform is the cooking of foods in the new Raytheon Radarange, an electronic range soon to be put on the market. A magnetron tube beams energy upon any food that is placed in an open “oven,” and all the cook does is set a timer to the desired cooking time, then push a button. In a few seconds or minutes, at the expiration of the pre-set time, the unit shuts off and the food is ready for serving. The food is always cooked according to your setting of the timer. And it’s always mighty good, too.

RF heating, which is starring in the reconversion program, is also starring in a 35-minute motion picture. Written and produced by George Blake for the Westinghouse Electric Corporation, it tells simply and clearly the role RF is playing these days to make industry turn handsprings. Says bright young Mr. Blake: “RF heating may not be a Van Johnson, but he’s just as hot in his own little way.”