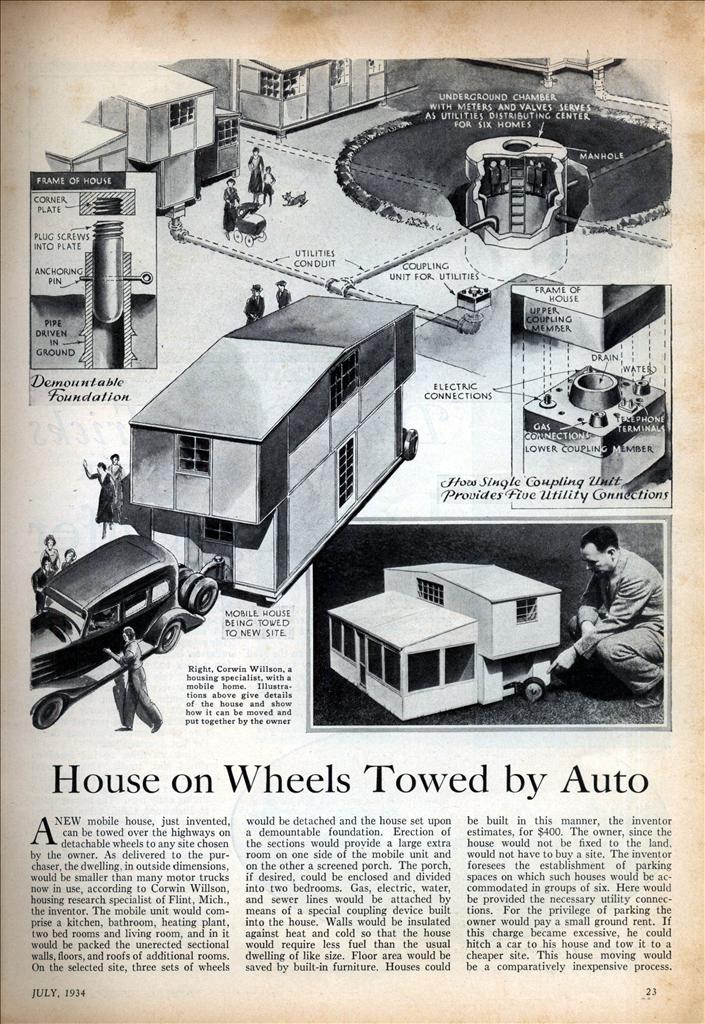 House on Wheels Towed by Auto

A NEW mobile house, just invented, can be towed over the highways on detachable wheels to any site chosen by the owner. As delivered to the purchaser, the dwelling, in outside dimensions, would be smaller than many motor trucks now in use, according to Corwin Willson, housing research specialist of Flint, Mich., the inventor. The mobile unit would comprise a kitchen, bathroom, heating plant, two bed rooms and living room, and in it would be packed the unerected sectional walls, floors, and roofs of additional rooms. On the selected site, three sets of wheels would be detached and the house set upon a demountable foundation. Erection of the sections would provide a large extra room on one side of the mobile unit and on the other a screened porch. The porch, if desired, could be enclosed and divided into two bedrooms. Gas, electric, water, and sewer lines would be attached by means of a special coupling device built into the house. Walls would be insulated against heat and cold so that the house would require less fuel than the usual dwelling of like size. Floor area would be saved by built-in furniture. Houses could be built in this manner, the inventor estimates, for $400. The owner, since the house would not be fixed to the land, would not have to buy a site. The inventor foresees the establishment of parking spaces on which such houses would be accommodated in groups of six. Here would be provided the necessary utility connections. For the privilege of parking the owner would pay a small ground rent. If this charge became excessive, he could hitch a car to his house and tow it to a cheaper site. This house moving would be a comparatively inexpensive process.