I think that the telephone on the second page is one of the earliest I’ve seen that has a modern handset. 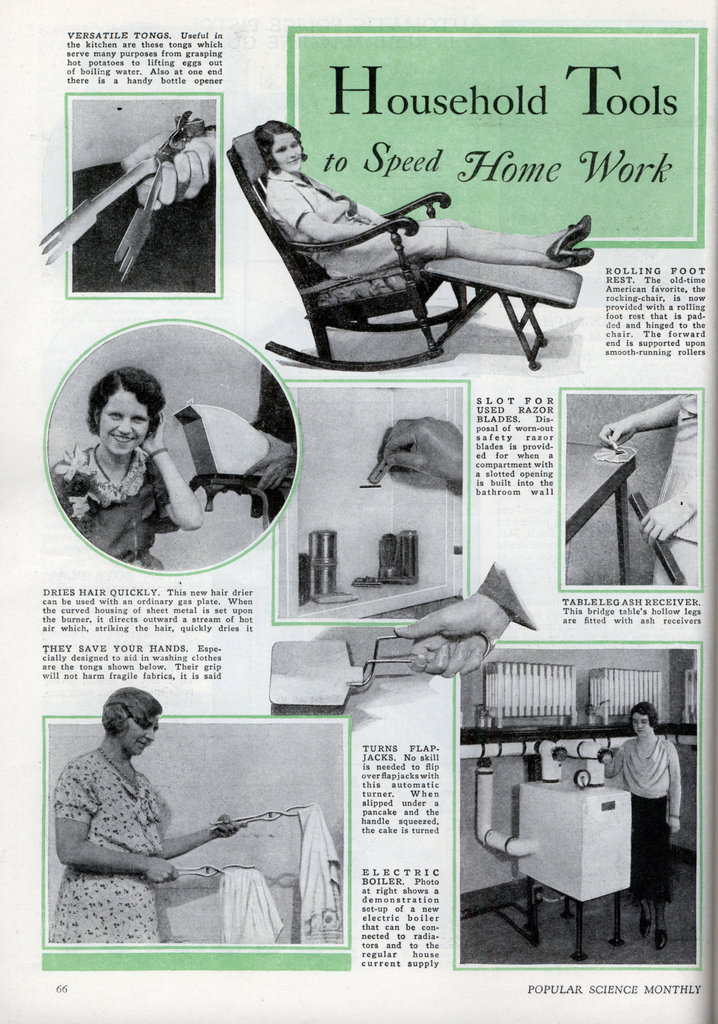 VERSATILE TONGS. Useful in the kitchen are these tongs which serve many purposes from grasping hot potatoes to lifting eggs out of boiling water. Also at one end there is a handy bottle opener

DRIES HAIR QUICKLY. This new hair drier can be used with an ordinary gas plate. When the curved housing of sheet metal is set upon the burner, it directs outward a stream of hot air which, striking the hair, quickly dries it

THEY SAVE YOUR HANDS. Especially designed to aid in washing clothes are the tongs shown below. Their grip will not harm fragile fabrics, it is said

ROLLING FOOT REST, The old-time American favorite, the rocking-chair, is now provided with a rolling foot rest that is padded and hinged to the chair. The forward end is supported upon smooth-running rollers

SLOT FOR USED RAZOR BLADES. Disposal of worn-out safety razor blades is provided for when a compartment with a slotted opening is built into the bathroom wall

TURNS FLAPJACKS. No skill is needed to flip over flapjacks with this automatic turner. When slipped under a pancake and the handle squeezed, the cake is turned

ELECTRIC BOILER. Photo at right shows a demonstration set-up of a new electric boiler that can be connected to radiators and to the regular house current supply

NEW HAND TELEPHONE SET. The base of this recently designed hand telephone set has no projecting parts. It may be set on a table or attached as a fixture to wall. Raising receiver-transmitter makes connection

SUGAR METER. Guesswork in mixing ingredients in the kitchen is unnecessary if the meter shown at left is used. Pressing the plunger releases a table-spoonful of sugar

THREE-IN-ONE TOOL. The latest thing in combination tools is this pot lifter, can opener, and bottle decapper. Its two curved and spreading prongs give it a firm grip when a hot pan is moved from stove

HOT OR COLD. The plant shown at left can be operated as a heating unit in the winter and then it can be adjusted as a refrigerator to keep the house cool during the summer months

GRAPEFRUIT HOLDER. Half a grapefruit can’t roll around the plate when it is held by this attractive server

COFFEE CUPS THAT FIT. In order to save space on shelves or cupboard hooks these coffee cups are made so they nest together, held by center rim

TWO-WAY FAUCET. At left a new faucet that, when the lever is pressed down, automatically closes itself as soon as lever is released. When lever is raised, faucet remains open until lever is again pushed into neutral position

WIPER ATTACHED TO SASH. Permanently attached to a window sash is a new metal window wiper with padded arms that run in slots on the frame and clean the surface at one sweep across it

DOORBELL AND ALARM. A combination lock for the front door contains also a doorbell and a burglar alarm. Any tampering with the lock sets off the alarm