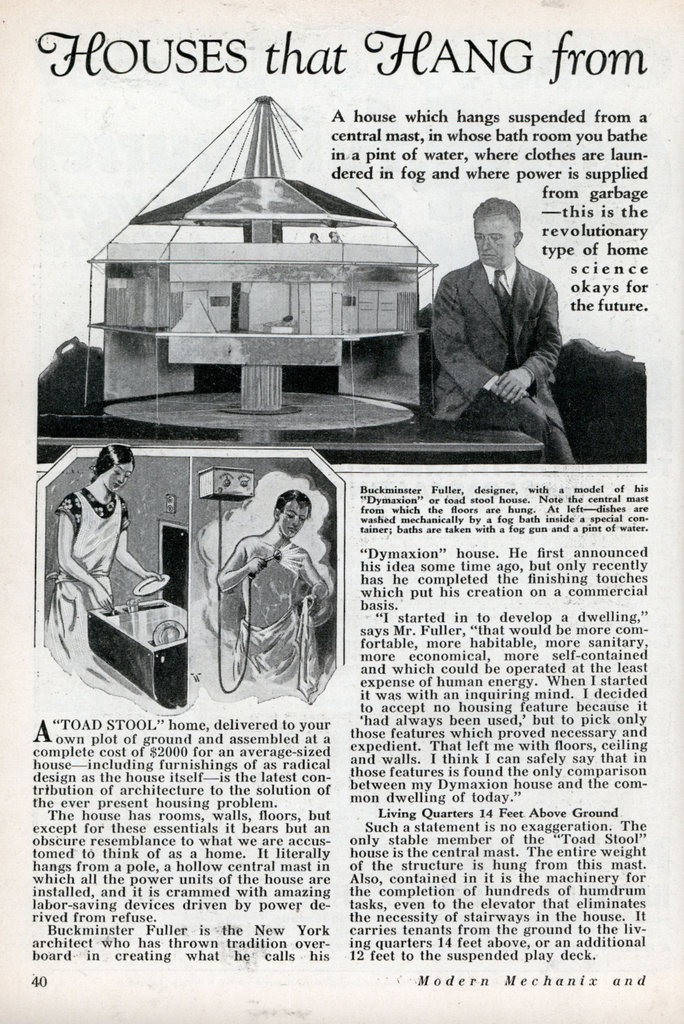 Houses that Hang from Poles

A house which hangs suspended from a central mast, in whose bath room you bathe in a pint of water, where clothes are laundered in fog and where power is supplied
from garbage â€”this is the revolutionary type of home science okays for the future.

A “TOAD STOOL” home, delivered to your own plot of ground and assembled at a complete cost of $2000 for an average-sized houseâ€”including furnishings of as radical design as the house itselfâ€”is the latest contribution of architecture to the solution of the ever present housing problem.

The house has rooms, walls, floors, but except for these essentials it bears but an obscure resemblance to what we are accustomed to think of as a home. It literally hangs from a pole, a hollow central mast in which all the power units of the house are installed, and it is crammed with amazing labor-saving devices driven by power derived from refuse.

Buckminster Fuller is the New York architect who has thrown tradition overboard in creating what he calls his “Dymaxion” house. He first announced his idea some time ago, but only recently has he completed the finishing touches which put his creation on a commercial basis.

“I started in to develop a dwelling,” says Mr. Fuller, “that would be more comfortable, more habitable, more sanitary, more economical, more self-contained and which could be operated at the least expense of human energy. When I started it was with an inquiring mind. I decided to accept no housing feature because it ‘had always been used/ but to pick only those features which proved necessary and expedient. That left me with floors, ceiling and walls. I think I can safely say that in those features is found the only comparison between my Dymaxion house and the common dwelling of today.”

Such a statement is no exaggeration. The only stable member of the “Toad Stool” house is the central mast. The entire weight of the structure is hung from this mast. Also, contained in it is the machinery for the completion of hundreds of humdrum tasks, even to the elevator that eliminates the necessity of stairways in the house. It carries tenants from the ground to the living quarters 14 feet above, or an additional 12 feet to the suspended play deck.